Dominion Energy Inc (NYSE:D) is one of the largest diversified utilities in the United States. But unlike some peers, notably Southern Company (NYSE:SO) and SCANA Corporation (NYSE:SCG), it's successfully executing its construction plans and rewarding investors along the way.

Execution, however, is just one of the things to like about Dominion. Here's a fuller picture of why Dominion Energy is a retiree's dream stock.

Dividends are often a key consideration for retired investors, as they often want to live off of the income their portfolios generate. Dominion offers a lofty 4.1% yield. That's roughly twice the level you would get from an S&P 500 Index fund. In fact, the spread between Dominion's yield and that of the broader market is nearly the highest it has been over the past 10 years, suggesting that now could be a good time to grab this high yielder. 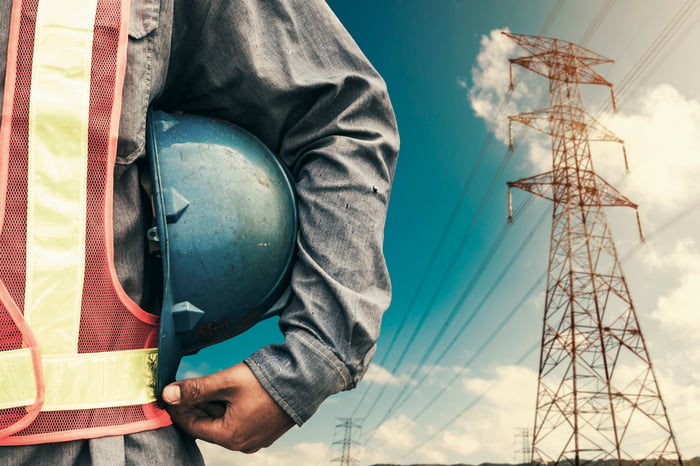 Then there's the fact that Dominion has increased its dividend annually for 15 consecutive years. That's an impressive streak that compares favorably to Southern Co and SCANA, which both have 17-year streaks going. It's worth noting here that both of those utilities yield more than 5%, which might make you think about buying them over Dominion. Don't jump at those high yields just yet.

So far, Dominion has a market beating yield and a long history of rewarding investors with annual "pay raises." But it also has a very low beta, a measure of relative volatility. Dominion's beta of 0.30 suggests that it is roughly 30% as volatile as the broader market. That's pretty good if you like to sleep at night. Southern's beta is 0.14 and SCANA's is 0.20, meaning both should be less volatile than Dominion. At this point, you might be thinking that Dominion shouldn't be the top pick here -- but keep reading.

Southern Company and SCANA are fine utilities, but both have had tough times getting big projects done on time and on budget. Notably, this pair stumbled badly with new nuclear power plants, an issue that got particularly troublesome when construction partner Westinghouse filed for bankruptcy. That event led SCANA to cancel its construction plans, and will mean even higher costs for Southern, which is going ahead with a nuclear build that's already well over budget and very late.

Interestingly enough, SCANA's weakened state following the decision to stop construction led Dominion to attempt an acquisition. That deal is still in process, but you're probably better off owning Dominion in this situation over SCANA, which at this point could use a little financial help to extract itself from the nuclear mess it's gotten into. Dominion expects the addition of SCANA, a much smaller company, to add as much as two percentage points to its growth rate starting in year one. 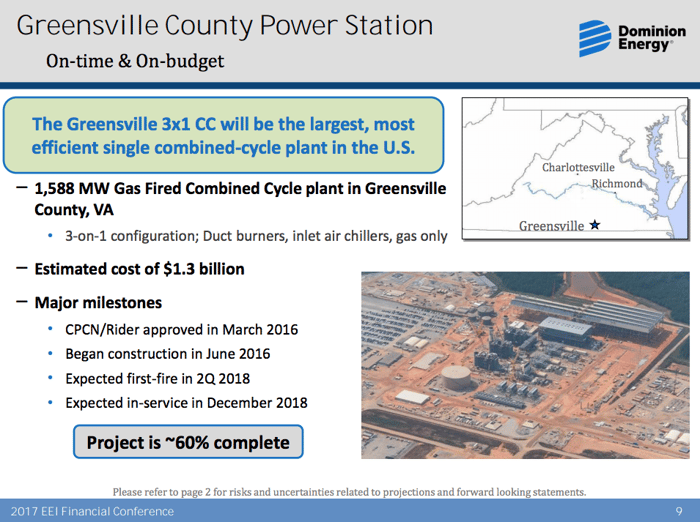 Dominion's big new power plant is on time and on budget, and not nuclear. Image source: Dominion Resources Inc

Dominion, for its part, has been working on some big projects as well that are largely on time and on budget. Its plans do not include building a new nuclear plant from the ground up, in case you were wondering. It's executing across its business here, including both its electric and gas operations. It expects all of its growth opportunities to allow for 6% earnings growth (that jumps to 8% if the SCANA acquisition goes through) and 10% dividend growth through 2020.

Which brings us to the real crux of the issue here: that 10% is roughly twice the dividend growth that Southern is projecting, and investors seem rightly concerned that SCANA for its part might not be able to sustain its dividend in the face of the political backlash following its decision to halt its nuclear construction. In other words, there are good reasons why these two utilities have yields that are more than a full percentage point higher than Dominion's. 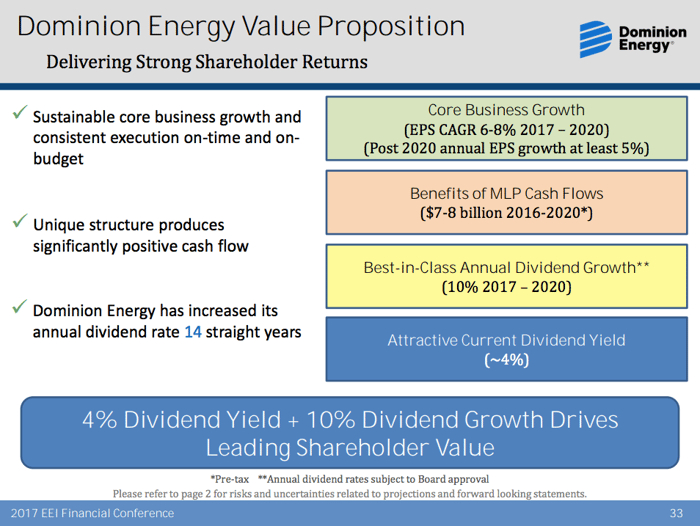 Dominion, however, just keeps chugging along, putting up solid results without any material drama. And while buying SCANA is definitely newsworthy, it's really just a sign of Dominion's strong financial and industry positions. A retired investor looking for a cornerstone stock should be leaning toward Dominion.

I don't want to make it sound like Southern or SCANA are terrible investments -- they aren't. For investors who can handle a little uncertainty, Southern might make a good high-yield investment option since it's likely to survive its current nuclear troubles in one piece. SCANA is a little trickier because of Dominion's offer to buy it. If that deal falls through, I would expect SCANA's stock to fall (it's going to have a harder time dealing with its troubled nuclear plans than Southern) -- and if the deal goes through you're effectively going to end up owning Dominion. In that case, you might as well just buy Dominion in the first place.

I say that because Dominion is executing well across its portfolio, and the future looks particularly bright for the utility and its investors based on its growth plans. Significantly, the future also looks free of major complications. That makes it a great option for retirees looking to add a mix of high yield and dividend growth to their portfolios, which sounds perfectly dreamy to me.