The rapid adoption of drones isn't going to slow anytime soon thanks to wide-ranging applications like product deliveries, rescue operations, security, and agriculture, among many others. Research and Markets, for instance, forecasts that commercial drone shipments are set to rise at an annual pace of 55% through 2023.

With such rapid growth at stake, technology giants Intel (NASDAQ:INTC) and NVIDIA (NASDAQ:NVDA) are stepping up their drone development programs. The chipmakers are using their expertise in computer vision and artificial intelligence (AI) to make a dent in this space, and they could turn out to be two of the best bets to buy into this market. Let's see why. 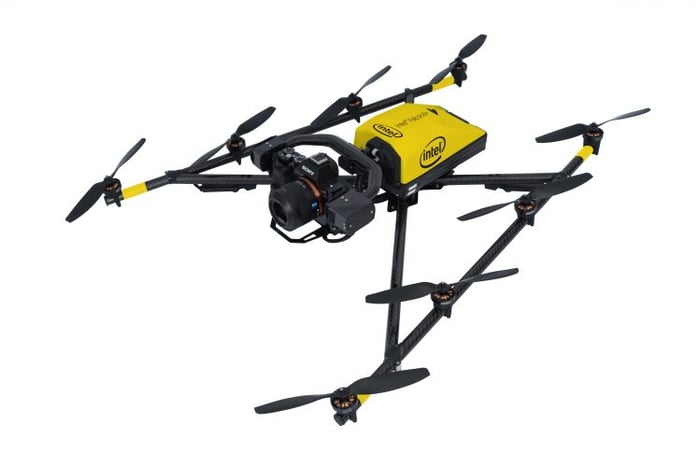 NVIDIA is trying to harness the power of its graphics processing units (GPUs) to accelerate drone development. Last year, the graphics specialist announced the Jetson TX2, a chip platform the size of a credit card, which enables AI in a wide range of devices, including drones.

This new platform should help NVIDIA enhance its expertise in drones. Drones embedded with the Jetson TX1 AI supercomputer are able to navigate on their own and avoid objects in areas without global positioning system (GPS) satellites.

With the Jetson TX2, NVIDIA is looking to raise its game as it claims that the new chip platform can deliver twice the computing power of its predecessor while consuming less power. So, a drone with the NVIDIA Jetson TX2 onboard can fly twice as fast as when it had the TX1 inside, and still avoid objects thanks to AI. Moreover, original equipment manufacturers can choose to increase battery life and the flying time because of lower power consumption, though they will have to compromise on speed.

The updated platform is already bearing fruit for NVIDIA. The chipmaker recently announced a couple of wins in the drone space -- one at General Electric subsidiary Avitas Systems and the other at Chinese e-commerce company JD.com.

Avitas will tap NVIDIA's AI expertise to train its drones for industrial inspection, while JD.com will use the chipmaker's Jetson platform to make AI-enabled drones for delivering products. Th JD.com partnership could be very fruitful as the Chinese e-commerce specialist plans to launch 1 million drones in the next five years using NVIDIA technology.

JD.com intends to reduce logistics costs by 70% with the help of autonomous drones. It believes that NVIDIA's embedded AI-enabled Jetson platform will allow its drones to deliver packages weighing as much as 30 kilograms (about 66 pounds) at speeds as high as 62 miles per hour.

NVIDIA could win big by becoming a supplier of autonomous navigation technology for drones, provided it can demonstrate the efficiency of its technology in real-world settings.

At the Consumer Electronics Show in Las Vegas this month, Intel sent 250 Shooting Star drones into the sky to put on a light show. These drones are all show and no go for such light shows because they are stripped of essential features like GPS or other sensors. But this doesn't mean that Intel is using drones only for such gimmicks.

Intel is serious about the commercial drone market. It has developed a full suite of products targeting this space, beginning with the Falcon 8+ drone system. The Falcon 8+ is designed for professional applications like industrial inspection and accurate data collection for mapping.

Intel's drones can carry a full-frame photo camera to capture the finest details for mapping purposes. The inspection payload package comes with two cameras, one of which is mounted on a gimbal for capturing thermal images.

So companies looking to deploy drones for industrial inspection can simply buy an Intel Falcon 8+, saving the time and development costs in buying a chipset and making their own system from the scratch.

The Intel Insight drone data-analytics platform is capable of churning out 2D/3D models that can be useful in industries like oil and gas, mining, construction, and agriculture. Intel seems to be preparing to tap the surface vision and inspection market, which could be worth $16 billion in 2023.

And the digital mapping market represents a sizeable opportunity as it is expected to grow at 11.5% a year through 2025, according to Grand View Research.

Intel and NVIDIA are taking different, but smart, paths to tap the drone market. NVIDIA's approach will appeal to those looking to develop their own solution with the help of the GPU specialist's Jetson platform. Intel, meanwhile, offers a comprehensive suite of solutions that could appeal to those looking to skip the development time and effort. The bottom line is that both these approaches could work and help the two chipmakers prosper.