There have been significant advancements in driverless car technology over the past few years, and those changes are moving us toward an autonomous vehicle market that's expected to be worth $127 billion by 2027. And with even more advanced systems in the works, 2018 could be an important year for investors who are considering the automakers and tech companies most involved.

Among those making big strides in the autonomous vehicle segment right now are Aptiv (NYSE: APTV), Alphabet (NASDAQ:GOOG) (NASDAQ:GOOGL), and Intel (NASDAQ:INTC), and investors would be wise to keep a close eye on their R&D. Here's why. 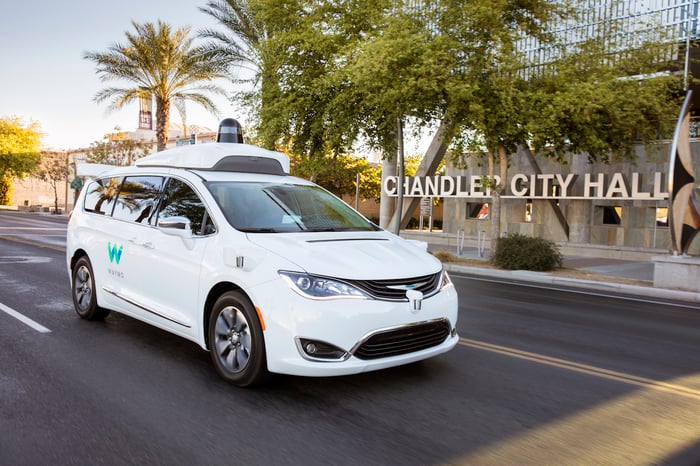 The closest thing to a driverless car pure play

Aptiv makes hardware and software that automakers can use to add advanced driving technologies into their vehicles. The company was recently spun out from Delphi Automotive so it could focus on driverless car technologies, while the parent returned its concentration to legacy products for combustion engines.

One of Aptiv's core technologies is its Centralized Sensing Localization Planning (CSLP) platform, which uses artificial intelligence, lidar, cameras, and other tech to give vehicles semi-autonomous capabilities. But Aptiv is expanding its prospects even further by teaming up with Intel and Mobileye to bring a Level 4 autonomous vehicle system to market by next year (more on that later).

Last year, Aptiv also purchased self-driving vehicle start-up nuTonomy, which added some important technology to its already robust line and should help it scale its autonomous vehicle technology faster. Expect Aptiv's driverless car footprint to expand in the coming years, as the company's partnerships with Lyft and Intel bring it even more business. All of this makes Aptiv worth a close look from investors right now.

Alphabet's subsidiary is paving the way

Alphabet has long been a leader in the driverless car space through its former Google Self-Driving Car Project, which was spun off as its own company last year and renamed Waymo. The company made some huge strides last year when it announced that it would take the human backup drivers out of its autonomous vehicles -- one of the first times any company had taken such a bold driverless car move.

That's not the only big thing Waymo's doing right now, though. It has started public tests of its driverless minivans in Phoenix, Arizona, where a group of testers is using them for their daily trips. It's one of the only public tests of its kind, and it shows just how far Waymo is ahead of its competitors.

The company's driverless cars have already logged 4 million miles of real-world experience since it began testing them back in 2009, and its systems have run another 2.5 billion simulated miles of tests in the past year alone.

Waymo has set its sights on building a ride-hailing service with its driverless minivans, and we're likely to see more from it this year as its Phoenix project takes off.

A chipmaker betting on new markets

Intel, of course, has long been a major player in the PC chip market, and it still dominates the data center space. But it's also looking to develop components for driverless cars as a way to can move into new revenue segments. The company is doing this in two key ways: Through its purchase of advanced driver assistance systems (ADAS) leader Mobileye, and by selling its chips to driverless car companies like Waymo.

Intel shelled out a hefty $15.7 billion last year to snatch up Mobileye. ADAS includes such technologies as automatic braking and collision-avoidance systems, and Mobileye holds about a 70% share of this market.

Intel, Mobileye, and Aptiv are working together to release an off-the-shelf fully autonomous driving platform by 2019. Automakers will be able to implement it into their existing vehicles to give them what the industry describes as Level 4 autonomy -- meaning the car really can fully drive itself with no human intervention, but not under all circumstances. The partnership is yet another indication of Intel's commitment to autonomous vehicles; the company has predicted that they could eventually open up a $7 trillion passenger economy.

Intel also announced last year that it chips are powering some of Waymo's autonomous vehicle technology. Specifically, its chips are being used for sensor processing, general computing, and connectivity. This has given Intel's chips more credibility in the driverless car market, though it's still a bit unclear whether Intel is actually powering the artificial intelligence needs of Waymo's driverless cars. In any case, the news should help the chipmaker secure more deals with other automakers and tech companies in the space.

Each of these companies made significant moves in the driverless car space last year that will put them in a great position in 2018. But it's worth pointing that Aptiv has the most to gain from driverless cars at this point. It's the closest thing to a pure play on driverless cars, while Intel and Alphabet don't earn significant revenues from their autonomous vehicle tech at the moment.