When Ford Motor Co. (NYSE:F) announced its preliminary fourth-quarter results Tuesday, and let investors know it would also be lowering 2018 guidance, the stock abruptly shed 7% of its value -- and it didn't help that rival General Motors (NYSE:GM) announced it would deliver record results and a forecast for an equally strong 2018. That merely softened the blow on Thursday when Ford released the full results and the stock dipped another 3%. There are a handful of important takeaways and things that need explaining, so let's dig in.

First, let's cover some of the basic numbers and explain the wild swing between Ford's pre-tax earnings and its net income. Ford's revenue was up 7% during the fourth quarter, a solid result, driven by increased wholesale volume. But due to higher commodity costs and increased incentives, that solid revenue gain didn't filter down to the bottom line. Ford's adjusted pre-tax profit checked in 19% lower at $1.7 billion.

However, Ford's net income actually jumped to $2.4 billion, a far better result than than its $783 million net loss a year ago. The difference was in large measure due to tax breaks and a much narrower loss from its annual pension-plan remeasurements. So investors should focus on the adjusted pre-tax figure rather than on headlines that tout net income rising 65% for the year.

Despite Ford's SUV- and truck-heavy portfolio and its rising transaction prices, incentives offset those gains during Q4. Its North American automotive segment recorded pricing gains of $493 million, but incentives to the tune of $568 million more than offset that. For the year, Ford's price increases provided a small gain over incentive spending: $2.89 billion, which was mostly offset by incentives costing $2.67 billion. 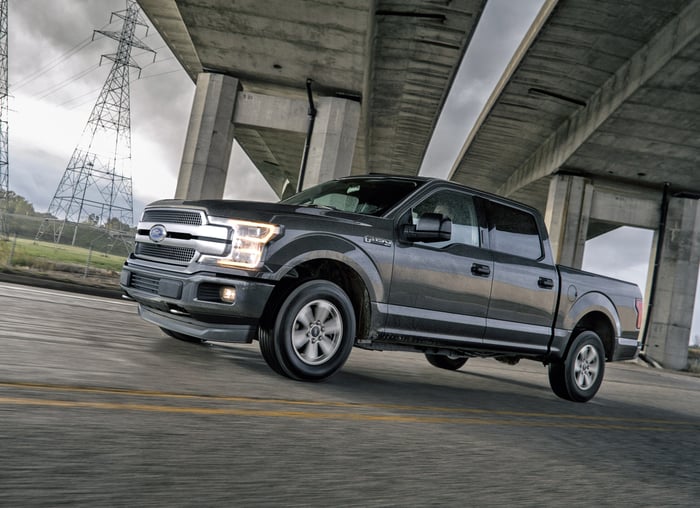 Investors will want to keep an eye on the F-Series' prices as GM's all-new Ram truck hits dealerships, and on Ford's pricing overall as its portfolio becomes fresher in 2018, which will support higher prices.

One part of Ford that too many investors overlook is Ford Credit, though it has been a pillar of strength for years. The good news is that it's continuing to thrive; it remains solidly profitable across the globe and improved year over year in all segments. In Q4, Ford Credit's pre-tax profit jumped to $610 million, up 53% compared to the prior year. That was driven primarily by strong receivables growth, financing margins, and lease residual performance that was better than expected thanks to higher auction prices. It's also worth noting that the higher-risk segment of its loan portfolio has held consistent at 6%, and the average FICO score of its borrowers has increased to 750. Ford Credit continues to provide the company with a large competitive advantage.

It's no secret that building cars is a capital intensive business, and when commodity costs increase -- especially for steel and aluminum -- it  directly weighs on Ford's bottom line. Profits benefited from lower commodity prices in 2015 and 2016, but that situation has reversed in 2017, and the trend is forecast to continue in 2018. 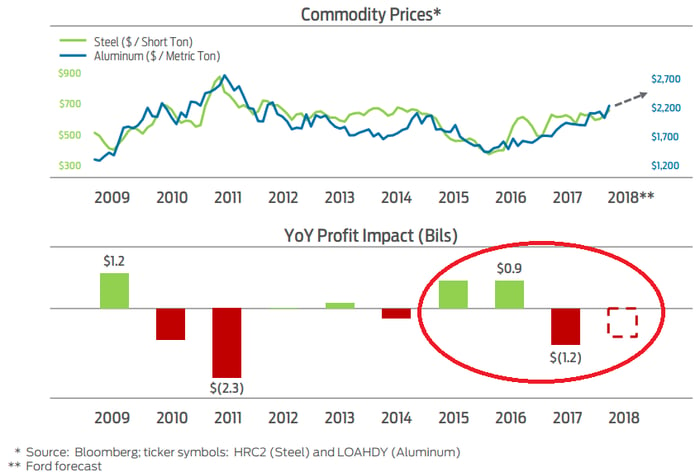 Ultimately, factoring in the headwinds of rising commodity costs, unfavorable exchange rates, and a few new vehicle launches, Ford expects revenue to be equal or slightly better in 2018, but forecasts a drop in adjusted earnings per share to between $1.45 and $1.70 for the year, as well as lower operating cash flow.

If there was one last key takeaway from the conference call, it's that analysts and investors are growing tired of vague answers from the automaker. Pressure is mounting on Ford to release specific details about how it plans to turn profits around -- expect the company to unveil more specifics to the public soon, or the stock price will face more strain.