Dolby Laboratories (NYSE:DLB) announced impressive fiscal first-quarter 2018 results late Wednesday, punctuated by greater adoption of its latest and greatest sound and video technology. With shares closing up almost 9% when all was said and done on Thursday, investors couldn't be more pleased.

Dolby's quarterly revenue climbed 8.1% year over year to $287.8 million, which translates to adjusted net income of $84.1 million, or $0.79 per share. By comparison, Wall Street was only expecting earnings of $0.44 per share on revenue of $266 million.

Even so, I think investors would do well to take a closer look at Dolby's quarter to better understand the underlying drivers of its business, as well as where it's headed from here. To that end, here are five important points that Dolby management discussed during this quarter's conference call with analysts. 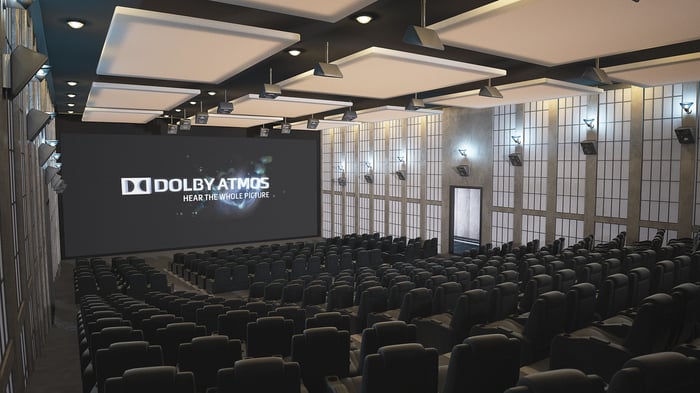 1. The source of Dolby's beat

Total revenue in the first quarter was $288 million, of which $258 million came from licensing and $30 million came from our products and services. The licensing revenue in the quarter did exceed the high end of our guidance by more than $20 million. And a lot of this was timing, because in Q1 we finalized a large recovery that we were expecting this year, but sometime after Q1.

To be clear, Dolby's revenue still would have arrived near the high end of its guidance -- which called for sales of $260 million to $270 million -- even if it hadn't secured that $20 million license recovery earlier than anticipated. Nonetheless, investors should note that this quarterly beat was partly a function of timing, so it wasn't quite as pronounced as it first appeared.

One, we had to approve a mandatory tax on our undistributed foreign earnings. ... Two, we have to write down the carrying value of our deferred tax assets to reflect the fact that the standard federal tax rate for corporations was 35% and is now 21%. And this change reduces the value of deferred tax assets currently on our books because those assets essentially represent future tax deductions. So as a result of these two items, we booked an estimated $155 million of discrete tax expense in Q1.

Dolby exceeded expectations on the bottom line for adjusted (non-GAAP) net income, which excludes the impact of unusual items like stock-based compensation and tax adjustments. But investors should know that -- thanks to the latter, given changes under the new U.S. Tax Cuts and Jobs Act -- Dolby technically incurred a net loss of $81.6 million (or $0.80 per share) this quarter based on generally accepted accounting principles.

Even so, this was a one-time adjustment, and investors can rest assured that Dolby's balance sheet remains ironclad (with $849 million in cash and no debt), and its core business is still solidly profitable.

We are off to a strong start to 2018, as we continued to focus on growth by expanding our leadership in audio entertainment solutions and by bringing our new Dolby experiences to market. Our momentum with Dolby Vision and Dolby Atmos was once again on display at CES this year, as our partners highlighted Dolby experiences across the show. We're seeing widespread industry adoption of Dolby Vision and Dolby Atmos, and these experiences are moving to the mainstream.

Dolby's latest technology has benefited from a slew of design wins and product launches in recent months. Both Sony and LG announced new lines of Atmos-enabled sound bars during the quarter. LG also announced that all of its 2018 OLED and super UHD televisions will feature a combined Dolby Vision and Atmos experience, while TCL and Skyworth each announced plans to incorporate Atmos in their own TVs in the coming months. All told, Dolby now has over 10 OEM partners making Dolby Vision TVs -- and that's not to mention new Dolby Vision Blu-ray Players from at least five manufacturers, as well as the first Dolby Vision PC announced from Lenovo during the quarter.

Perhaps most exciting, recall shares popped in September after Apple announced that Dolby Vision would be incorporated into several of its flagship products, including the iPhone 8, 8 Plus, and X smartphones, as well as the new Apple TV set-top box.

All that new hardware would be a waste if it weren't for the growing trove of Dolby-enabled content to enjoy. To be fair, Dolby had already struck deals with virtually every major movie and TV studio in the first couple of years following the initial launches of Dolby Vision and Dolby Atmos. But this year, the amount of actual content stemming from those deals is accelerating.

According to Yeaman, for example, the number of Dolby Vision movies on iTunes more than doubled sequentially from last quarter to over 200. Netflix also boasts over 200 hours of original content mastered in Dolby Vision. In gaming, there are now six Dolby Atmos games available for Xbox. And on the big screen, all 10 of last year's top 10 highest-grossing movies were optimized for Dolby Cinema, which incorporates both Dolby Vision and Dolby Atmos.

This marks a modest bump from Dolby's previous guidance, which called for fiscal 2018 revenue in the range of $1.14 billion to $1.17 billion, with the difference owed to slightly increased expectations from the core licensing business. Drilling deeper, Dolby believes it will see flat to slightly higher revenue from the broadcast segment, as well as growth in mobile, consumer electronics, and products sales from Cinema and Dolby Voice.

In the end, its big tax expense notwithstanding, there's no denying that this was a strong quarter for Dolby that rightly leaves investors excited for what's to come. And it's no surprise to see shares trading near all-time highs in response.