Artificial intelligence (AI) is being used to enable cars to drive themselves, detect cancer, improve search engines, and a lot more. Why not use it for picking stocks? That's exactly what many organizations and individuals are doing. But most of them, understandably, keep those potential winning stock ideas to themselves.

There's at least one way you can find out what stocks an AI system would recommend, though. Equbot used IBM Watson, one of the most advanced AI systems around, to create the AI Powered Equity ETF (AIEQ). This exchange-traded fund analyzes thousands of U.S. companies every day to identify stocks that could potentially beat the market.

Right now, the AI-powered ETF has invested the most in five stocks: Amazon.com (NASDAQ:AMZN), Alphabet (NASDAQ:GOOGL), NVIDIA (NASDAQ:NVDA), Forest City Realty Trust (NYSE:FCE-A), and T. Rowe Price (NASDAQ:TROW). Although the ETF doesn't provide details on why these five ranked at the top of IBM Watson's list, let's look to see why the AI system might like these stocks.

Amazon is AIEQ's top holding. It's not surprising to me that an AI system would like the stock. After all, Amazon has soared over 1,700% in the last 10 years. The company also claims strong momentum in a number of categories, including revenue, earnings, and cash flow growth.

Maybe Equbot has fed enough data into IBM Watson that the system knows just how much Amazon dominates nearly every industry it enters. The most visible area to average Americans that Amazon leads is in e-commerce, but the company's Amazon Web Services is also a juggernaut in cloud computing.

There are plenty of industries left to conquer for Amazon. The company has already hinted about moving into the retail pharmacy business. Amazon has what's known as "optionality" -- multiple ways of achieving success by evolving and adapting. If the AI system recognized this huge strength for the company, picking Amazon stock wasn't a tough decision.

Google parent Alphabet is AIEQ's No. 2 holding. Although Alphabet hasn't sizzled as much as Amazon over the past decade, the stock has still been a huge winner, more than quadrupling during the period.

In several respects, Alphabet is cut from the same cloth as Amazon. The company has enjoyed success in nearly every market that it has entered. Its Google search engine, YouTube video site, Chrome browser, and Android mobile operating system are the leaders in each of their respective markets.

It would be interesting, though, to know how much weight IBM Watson placed on Alphabet's "other bets." The company has invested in wide range of initiatives, including self-driving cars, extending human lifespans, and developing glucose-sensing smart contact lenses for diabetic patients. These investments hold the potential to pay off in major ways -- and the AI system just might be counting on it. 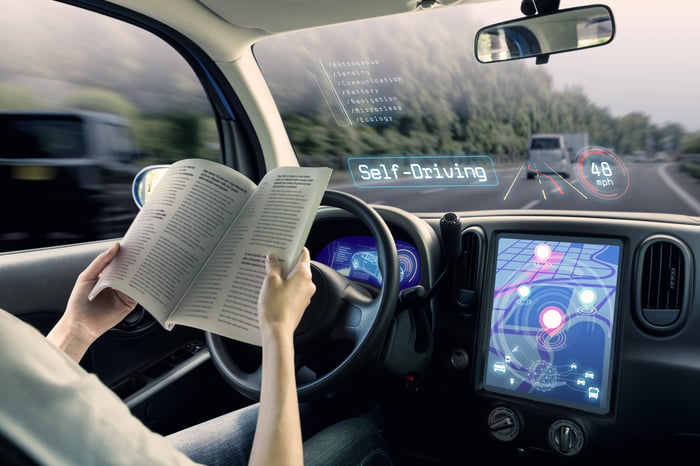 Perhaps it's a coincidence, but the top three stocks in Equbot's AI-powered ETF are all leaders in AI. Maybe AI likes to invest in AI? If so, making NVIDIA the stock with the third-largest investment makes a lot of sense.

NVIDIA initially developed its graphics processing units (GPUs) for gaming. However, it didn't take long for AI developers to realize that these GPUs were also ideal for the intense processing required for machine learning applications.

But AI isn't the only growth opportunity for NVIDIA. If virtual reality takes off in a major way, the company's chips are likely to be in higher demand. NVIDIA's technology is also great for blockchain processing with some cryptocurrencies. All three of these factors were important in my decision to buy NVIDIA stock. It's possible IBM Watson considered these growth drivers, too.

Now for a different twist. Forest City Realty Trust is about as different from Amazon, Alphabet, and NVIDIA as it could be. The company owns office, apartment, and retail real estate across the United States. Over the past 10 years, the stock has fallen more than 40%. In 2017, Forest City stock gained nearly 16% -- not bad, but still below what the S&P 500 index delivered.

So why would an AI system rank Forest City Realty Trust as its No. 4 holding? It's definitely not because of the company's valuation. The stock trades at 48 times expected earnings. Perhaps IBM Watson knows something that Wall Street analysts don't, because the consensus estimate only calls for mediocre earnings growth over the next few years. And while Forest City pays a dividend, the yield of less than 2.4% isn't anything to get excited about.

Maybe the AI system spotted something encouraging in the real estate markets where Forest City operates. I'm really not sure on this one.

T. Rowe Price provides provides investment management services throughout the world. Although the stock wasn't a huge winner during much of the past decade, it's really taken off over the past 12 months, climbing nearly 60%. That's just a tad behind Amazon's performance and significantly better than Alphabet's gain in the period.

My hunch is that IBM Watson liked the strong earnings growth that T. Rowe Price has generated lately. I also suspect that the investment firm's zero debt, which gives T. Rowe Price lots of financial flexibility to take advantage of growth opportunities, played a role in picking the stock.

Should you go out and scoop up shares of each of these five stocks? Not necessarily. AI isn't perfect. In fact, since the AIEQ began operations in the second half of 2017, the S&P 500 index is outperforming the AI-powered ETF.

However, several of the top stocks picked by the ETF's AI system are worth checking out. Just make sure you know why you want to buy a stock before you do so. It's important to invest intelligently, whether the intelligence is artificial or not.