After starting 2018 on a strong note, airline stocks have plunged in the past week. It's no secret why: United Continental (NASDAQ:UAL) announced on Tuesday afternoon that it plans to boost capacity by 4%-6% this year -- with similar increases in 2019 and 2020 -- making a clean break from the capacity discipline of the past decade.

United's aggressive growth plan caused its stock to plunge on Wednesday. Most other airline stocks moved lower as well, because of fears of an industry price war. Among United's rivals, Spirit Airlines (NYSE:SAVE) was one of the hardest hit. 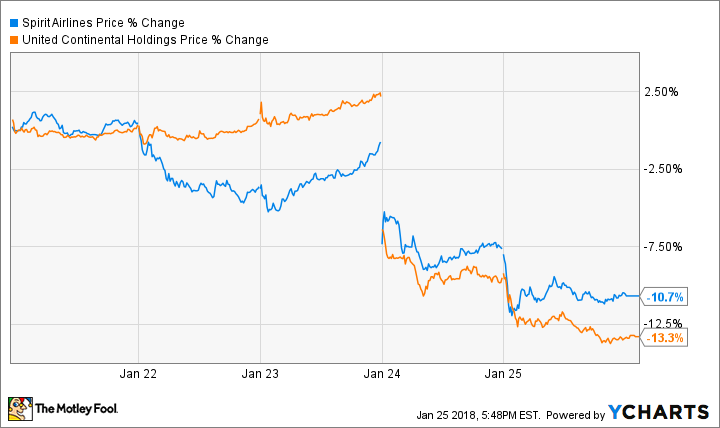 However, while Spirit Airlines was hurt by a brutal price war with United in 2017, it might not be a major casualty of United Continental's 2018-2020 growth plans. Let's look at what derailed Spirit's turnaround effort last year -- and why this time might be different.

During early 2017, Spirit Airlines seemed to be on the road to recovery following a long period of steep unit revenue declines. Revenue per available seat mile (RASM) rose 0.9% in the first half of the year. RASM probably would have increased even more but for a pilot dispute that began in May and caused a massive spike in flight cancellations.

However, Spirit's revenue momentum abruptly ended around mid-year, when a new fare war with United Airlines broke out. RASM plunged 6.3% in the third quarter.

According to Spirit Airlines' management, the unit revenue pressure was concentrated in a few markets: primarily Chicago, Houston, Newark, and Dallas/Fort Worth. (The first three are all major United Airlines hubs.) Executives at Spirit and United disagree about who started the fare war, but once it began, the two carriers matched each other's prices down to ridiculous levels -- as low as $10 one way! -- to avoid losing market share.

The 2018 dynamics may be different

With this backdrop, it's understandable that Spirit Airlines shareholders are panicking. Recent media reporting that emphasized United's price-matching plans has exacerbated investors' fears. However, the outlook may not be as dire as it seems. First, very little of United Continental's growth will affect Spirit Airlines -- especially in 2018. Virtually all of United's planned capacity growth this year will come in three broad markets: small domestic cities, overseas destinations like Singapore and Sydney, and Hawaii. Spirit Airlines doesn't fly to any of these places.

Indeed, even if United adds seats on some of its routes between major cities where it may compete with Spirit, it will fill lots of those seats with passengers connecting from small cities. In many cases, United's small-city expansion could lead to fewer seats being available for point-to-point customers on United's mainline routes, which would effectively mean less competition for Spirit.

Second, Spirit Airlines is reducing its exposure to the big mid-continent hub markets where it has been drawn into price wars in recent years. It has been cutting capacity slightly in Chicago and Dallas-Fort Worth. In Houston, its passenger traffic increased just 5% in 2017.

By contrast, Spirit is growing by leaps and bounds in Florida. In Fort Lauderdale, its traffic increased by 10% last year. Spirit expanded even faster in Orlando. While full-year statistics aren't available yet, Spirit's traffic there surged about 30% in November.

Spirit Airlines will continue to diversify its route network in 2018. It still may get sucked into fare wars from time to time, but the impact shouldn't be as devastating.

Execution will be the key

The only way for Spirit Airlines to quell investors' panic will be to deliver strong results during 2018, thereby proving that its new route strategy is working.

Earlier this month, Spirit revealed that RASM fell about 2% last quarter, which would be much better than its original forecast for a 4%-6% decline. That's a positive sign, but Spirit Airlines will need meaningful unit revenue growth in 2018 to offset the impact of rising fuel prices. We will find out on Feb. 6 -- Spirit's scheduled earnings release date -- whether the carrier expects to make progress on this front during the first quarter.