Please ensure Javascript is enabled for purposes of website accessibility
Log In Help Join The Motley Fool
Free Article Join Over 1 Million Premium Members And Get More In-Depth Stock Guidance and Research
By Nicholas Rossolillo - Jan 28, 2018 at 8:39AM

Virtual assistants and smart-home devices are the latest fronts in the battle for technology platform supremacy.

Amazon (AMZN 2.32%) was the first to make a successful push into the burgeoning home assistant market with its line of Echo devices. Google parent Alphabet (GOOG 3.60%)(GOOGL 3.77%) has caught up fast, though, countering the online retailer's equipment with a few offerings of its own. It may look like a fight over gimmicky gadgets, but this battle is about more than just smart speakers and digital assistants.

Google was an early entrant to the smart-home movement, purchasing smart thermostat company Nest in early 2014. The company fell behind later that year, though, when Amazon's virtual home assistant Echo came out. Google caught up in a big way with the release of its own assistant, Google Home, in late 2016.

Amazon has stayed in the lead the last few years, adding new versions of Echo, including one with a built-in screen, but Google has responded once again. The company recently announced that no less than 15 third-party electronics manufacturers will be releasing devices with Google Assistant built in. Companies like LG Electronics and Lenovo are building home assistants with various features, including digital clocks and smart displays powered by Google. 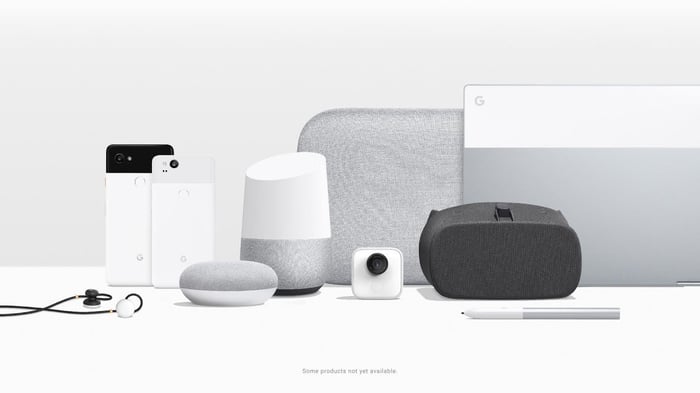 Who has the edge now?

Google has doubled-down on its hardware efforts, acquiring HTC's smartphone business last year to better control the Pixel 2 phones, and it recently released a new Pixelbook laptop/tablet combo. Google Assistant has been making its way into a range of devices from wearables to appliances and TVs. With the addition of smart-home displays, the company hasn't just caught up but now arguably in the lead.

It's true, Amazon's hardware is more prevalent, as it came out a full two years earlier. An estimated 11% of U.S. households report owning an Echo, versus just 4% for a Google voice-activated product, but Google's software is more pervasive in a range of devices.

Google also has by far the biggest app store -- which is available on its new smart displays but not on Echo -- and the company has also opted for a more open platform. While Echo can be used to place orders on Amazon, Google Home can now make orders with dozens of different stores like Wal-Mart and Target.

The recent move from Alphabet into a new line of hardware isn't an isolated event, it's really about technology platform supremacy. The two companies have been in a spat over the last few years, with Amazon refusing to sell Google products it competes against, and Google recently pulling YouTube support from Echo Show in response.

The battle could get even more complicated later in the year when Apple releases its home assistant called HomePod. Consumers interested in making a home assistant a part of their family have choices, with each presenting a different angle. For Amazon, its retail and other web services are a selling point. Apple is clearly going for music enthusiasts.

Alphabet, on the other hand, looks like it's trying to leverage its software and search prowess to make it into every corner of our lives. Eventually, there could be a place for multiple devices in every home, but the way things are shaping up, consumers who choose one device will be limited by its lack of functionality with other platforms. Because of Google's widespread use with a multitude of other products and the extensive integration of its software, I like its chances in this fight.