Food, as with fashion, can be faddish. Some of those fads stick, though, and permanently alter the way we eat and the way the restaurant industry operates. A month into 2018, here are a few of those food trends that are gaining momentum.

Bring it to me

Delivery has been ubiquitous with pizza for a long time, but as Americans' schedules change and convenience becomes increasingly important, it is gaining traction with other types of food as well. Some industry studies put the number of restaurant chains testing delivery at 80%, and the number of meals delivered as a percentage of the whole restaurant industry growing in the double digits.

It has become easy for restaurants to take the trend for a spin. Available services abound, like Grubhub (NYSE:GRUB), Uber Eats, and Amazon (NASDAQ:AMZN) Restaurants, making delivery a low-risk proposition for restaurants. If the trend continues, Grubhub could be the biggest benefactor as the leader in the space. As for restaurants themselves, with delivery gaining momentum, there are no clear-cut winners, just those that could likely lose patrons if they don't offer the extra convenience.

If you want to ride the move to mobility now sweeping the restaurant industry, along with the rest of the economy, a good place to start is diversified Amazon. If you want more focused exposure, Grubhub could be the ticket. After a round of acquisitions, the company has a clear-cut lead in delivery, though its current valuation looks a little steep.

A burger, please, but hold the meat

Plant-based meat replacements, supplements, and veggies, oh my! Reasons for a move away from meat include ethics, religion, and health concerns; the end result, though, is that the number of people who have gone vegetarian or vegan has been growing by double digits.

Like the delivery trend, offering more plant-based alternatives to classic dishes is more a way to retain customers than it is a growth initiative for restaurant chains. However, one company that is doubling down on the plant-based trend is food conglomerate Nestle (OTC:NSRGY). The company said it sees as many as 50% of consumers seeking more plant-based foods and the industry growing to $5 billion a year by 2020.

To that end, Nestle made several acquisitions and started several new business subsidiaries to take advantage of vegetarian, vegan, and plant-based food growth. Whether it involves restaurants, meal delivery services, or at-home cooking, Nestle could be a big winner if the trend continues.

The other Middle East export

The Mediterranean diet has long been a mainstay in the world of healthful diets. Others come and go, but science has shown that the lean protein and simple unprocessed foods from Southern Europe, North Africa, and the Middle East are a sustainable yet healthy way to eat. No surprise, then, that cuisine from the Middle East and North Africa, is gaining diner interest right now.

Even Amazon's Whole Foods grocery chain sees ethnic cuisine going mainstream in 2018, so a self-fulfilling prophecy could be underway. Consumers have been imposing their desire for healthier and all-natural options onto restaurants, too, most notably helping the fast-casual dining segment (a concept that maintains the convenience of fast food but with a higher-quality menu) take off in recent years. 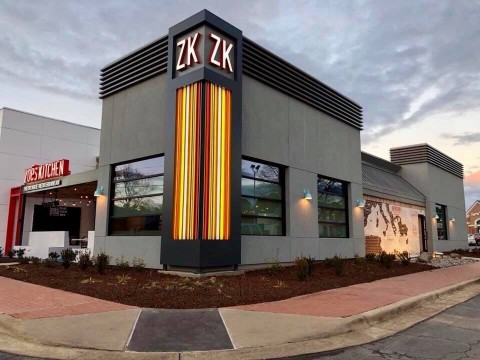 One experimenter in the space, Zoe's Kitchen (NYSE:ZOES), has been successfully opening dozens of new locations even in the midst of industry overexpansion. If interest in the ethnic food grows this year, Zoe's could get a bump. Many items on its menu pay homage to the Middle Eastern, North African, and Mediterranean categories.

There are many other fads making waves in the world of food, but delivery, plant-based food, and dishes from the Middle East are three that are developing into more than just a passing trend. Only time will tell if they stick, but businesses in a good position to capitalize on them could have a good 2018.