For investors in Mediterranean restaurant chain Zoe's Kitchen (NYSE:ZOES), 2017 was a terrible, horrible, no good, very bad year. The company's comparable restaurant sales (comps) -- which measure sales growth (or declines) from a restaurant's existing stores -- have been falling for the last three quarters, marking Zoe's first comps declines as a public company.

However, over the past three months, Zoe's shares have rallied more than 30% as investors appear to believe a comps recovery is on the horizon. Here are two good reasons to believe that better times are ahead for Zoe's, and one reason to be skeptical. 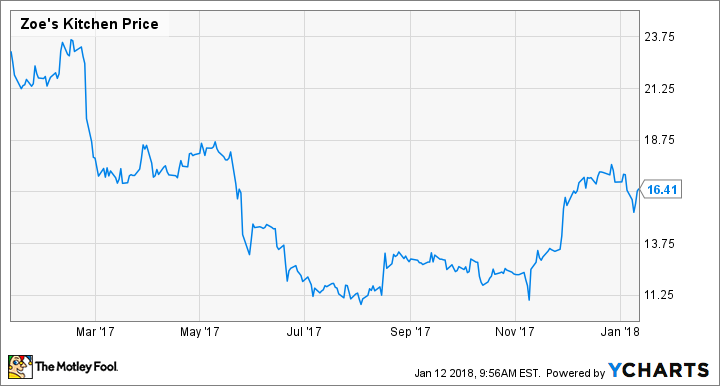 The industry appears primed for a turnaround

The culprit for Zoe's comps declines -- and for the "restaurant recession" being experienced industrywide -- is falling consumer traffic. With a proliferation of food choices, including prepared meals from grocery stores and plenty of delivery options, consumers simply haven't been dining out as often. 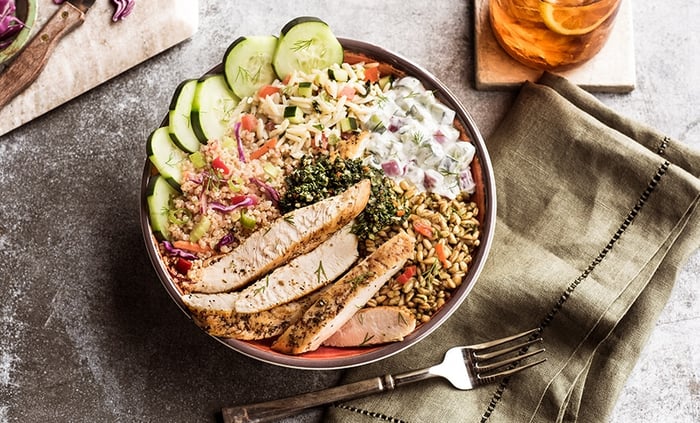 This has led to sizable traffic declines over the past several quarters. And Zoe's has been no exception. However, according to data from TDn2K's Black Box Intelligence, the rate of decline slowed significantly in the fourth quarter and represents the best traffic result in two years for the industry.

That improvement helped the restaurant industry post its first quarter of comps growth in two years as well, with same-store sales growing 0.4% in Q4.

With the industry finally trending upwards again, Zoe's looks as if it may enjoy a recovery, too.

In 2017, Zoe's suffered worse comps declines than the industry during Q1 and Q2, but had a much better Q3 (relatively speaking) -- outperforming the industry by 1.7%. Moreover, that result included the significant sales impacts from Hurricanes Harvey and Irma. According to Zoe's estimates, excluding the effects of those storms, comps might have actually increased by 0.4% during Q3.

What's driving this turnaround in the making? The company believes the new menu it rolled out last year has been particularly effective at driving more customers to its stores. The data seem to back up this assertion, as the company went from underperforming industry traffic numbers in Q2 to beating them handily in Q3.

Zoe's won't report its Q4 2017 earnings until February, but when it does, a return to positive comps doesn't seem at all far-fetched. And if the company can manage to hold its margins steady this year as well, 2018 may turn out to be a much better year for Zoe's investors.

However, one quarter does not make a trend

For more cautious investors, a wait-and-see approach may make more sense. Though both the industry and Zoe's appear to be showing underlying signs of improvement, a sustained recovery looks far from certain at this point.

That's especially true since the root cause of the industry's comps struggles -- falling customer traffic -- hasn't gone away. With traffic continuing to decline year over year, the recent uptick in comps is being driven entirely by a rise in the average guest check. That's obviously not a sustainable formula, and until customer traffic begins to rise again, any comps uptick is likely to be temporary.

Although it is great to see the industry move away from the recurring story of declining same-store sales, we also must keep things in perspective. ... December of 2016 had very soft same-store sales and traffic results, so lapping over those results didn't pose much of a challenge. Over a longer view, same-store sales declined by 2.0 percent during the fourth quarter of 2017 when compared with that same quarter in 2015. Furthermore, the trend of declining guest traffic continues to plague the industry and is one that seems unlikely to reverse any time soon .

Until that traffic headwind abates, investors may want to wait for a clearer indication that the company's prospects are improving before jumping in. At a recent conference appearance on Jan. 9, Zoe's management didn't drop any discernible hints about its Q4 comps or traffic numbers, so investors will have to wait for Zoe's next earnings report for the official word.