January is shaping up to be one of the best opening months of the year in stock market history. You have to go back 31 years to see a better January total return for the S&P 500 than the roughly 7% gain that the broad-based index has posted so far this month. Some market participants have concluded that this means that 2018 is destined to be another great year for stocks, because of a phenomenon known as the January effect. Simply put, many investors believe that the direction in which the market moves during January defines whether it will rise or fall for the entire year.

Despite its popularity, the January effect doesn't really bear out as a good indicator of future performance, as you can see below: 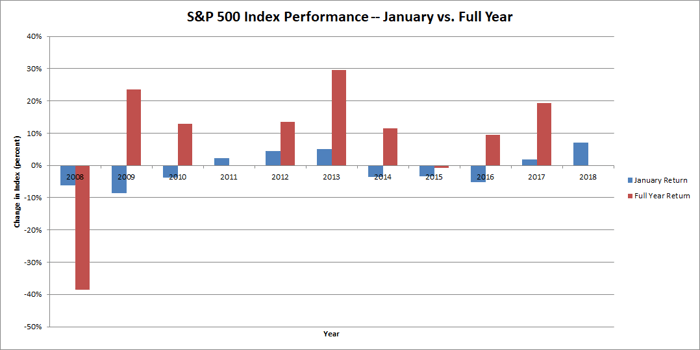 The January effect's track record is like flipping a coin: It's been right five times and wrong five times in the past 10 years. That's not very useful as a reliable signal for how 2018 will go.

Meanwhile, market historians will remind you that the last time that January was a better month for the stock market, things went very badly. In January 1987, the S&P 500 jumped more than 13% and continued to rise throughout much of the year. Then the stock market crashed, sending the S&P down more than 20%. That left investors with just a 2% rise for 1987 as a whole.

A Foolish Take: Is the January Effect Real? @themotleyfool #stocks Next Article
Current