Hawaii is an atypical U.S. state; this is also true of its banking sector. The big banks that operate throughout mainland America are almost entirely absent there, rather the state is dominated by a pair of lenders that not long ago held more than 75% of local market share.

This duo is Bank of Hawaii (NYSE:BOH) and First Hawaiian (NASDAQ:FHB). The former just unveiled its Q4 and fiscal 2017 results. Here's how it did. 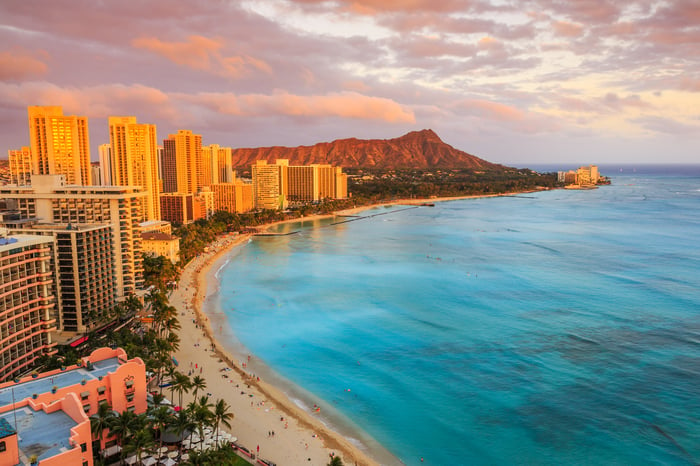 Hawaii is far from the U.S. mainland, and as such its native banking sector concentrates heavily on business within the state. Consequently, Bank of Hawaii's profitability has broadly moved in step with the state's economy. Witness: 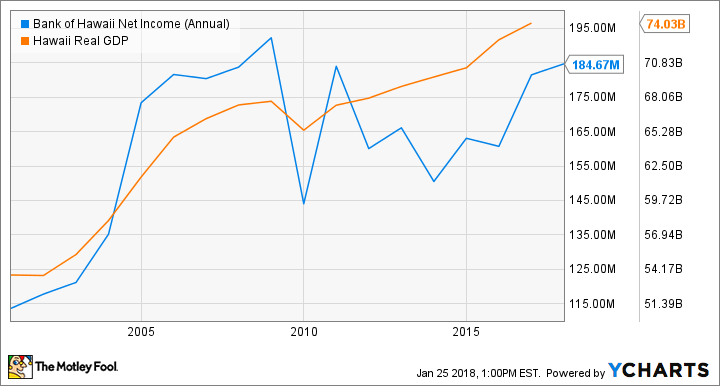 The latest net profit figure missed the average analyst estimate, but not by much -- those prognosticators were expecting EPS of $1.07.

For the full year, the revenue tally was $457 million, a 5% improvement. This was on the back of an end-year loans and leases figure that increased an encouraging 9%, and deposits that rose by 4%.

Annual net profit came in 2% higher at nearly $185 million ($4.33 per share). Even though the bottom line was slightly affected by a $3.6 million charge to adjust for the government's recent tax reform measures, that EPS figure was the highest in Bank of Hawaii's history.

The good news is that said economy is expected to continue heading north, if not at spectacular rates. Hawaii's Department of Business, Economic Development, and Tourism is forecasting 1.5% growth in real GDP for both this year and 2019, and a slight tap on the brakes (to 1.4%) in 2020.

This, combined with a prudent lending regime -- the bank's net charge-off rate was 0.15% in Q4, compared to the most recent average of 0.44% for all U.S. banks -- should keep Bank of Hawaii on a growth path.