Walmart (NYSE:WMT) is no longer the stodgy big-box chain of yesteryear. The retail giant that rose to power by blanketing rural America offering bargain-bin prices and selling everything under the sun has had to adapt.

The threat of Amazon (NASDAQ:AMZN) and the popularity of online shopping in general mean that customers no longer have to visit a store to get a t-shirt, a bag of apples, or a new TV. To keep up with consumer habits, Walmart has changed dramatically over the last five years, a shift that began with Doug McMillon's promotion to CEO in February 2014. McMillon inherited a company on the verge of a crisis: comparable sales were falling at both Walmart U.S. and Sam's Club stores. Through a number of strategic decisions, he has positioned Walmart to thrive in the new retail environment, and the stock is now at all-time highs. The company just posted its best quarterly comparable sales growth since 2010.

Let's look at some of the biggest ways Walmart has changed in the last five years, and how those changes have impacted the company. 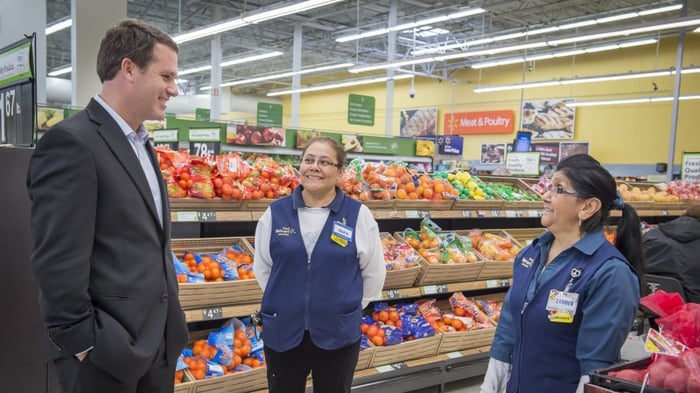 For much of its history, Walmart has been a bogeyman of labor activists and others on the left due to its reputation for low wages, union-busting, and an unwillingness to offer benefits. However, the company made a surprising move in February 2015. It said it would raise wages above the federal minimum of $7.25/hour, lifting pay to at least $9/hour in April of that year and then $10/hour in February 2016, as long as employees completed a training program.

McMillon argued that the move would help the company clean up stores, eliminate out-of-stocks, and improve customer service. Investors, however, were unimpressed, sending the stock lower over the next several months. In October of that year, Walmart shares hit a five-year low as management said the two wage hikes would add $2.7 billion to the company's expenses and push earnings per share down 6-12% by the following year. Management didn't forecast EPS returning to growth until fiscal 2019.

Just this month, the company said it would again raise its base wage to $11/hour, touting the benefits of the new tax law. The prior wage hikes delivered the desired results, as store performance and customer satisfaction improved. Additionally, the company recently announced progressive family leave, showing its approach to employees has changed in more ways than just wages.

The biggest decision Walmart has made in the last five years was its $3.3 billion acquisition of Jet.com in August 2016. The move was widely criticized at the time, as Walmart was seen to be throwing away billions on an unproven start-up, and pundits dismissed it as an "acqui-hire" of Jet.com Founder Marc Lore, buying his business just to gain his services. However, the deal has paid off handsomely for the retail giant in the short time since.

When McMillon took the helm in 2014, he recognized the need to focus on e-commerce, promising to "invest aggressively" in online sales. However, Walmart's e-commerce growth steadily slowed over the next two years, and by April 2016 global e-commerce sales growth had fallen to just 7%, signaling that Walmart was losing market share in the important growth segment.

After acquiring Jet.com, Walmart has made smaller purchases of native online brands like Modcloth, Bonobos, and Moosejaw, which should help fuel e-commerce growth and cater to the more upscale customer base on Jet.com. It wouldn't be surprising to see that shopping spree continue.

Five years ago, Walmart was just finishing a year when it had opened 136 Supercenters in the U.S., in addition to dozens of Neighborhood Markets and 14 Sam's Clubs. This year the company plans to open fewer than 15 Supercenters and fewer than 10 Neighborhood Markets in the U.S. It also said weeks ago that it would shutter 63 Sam's Club locations. Since the company announced two years ago that it would close 269 stores around the world, including all of its Walmart Express stores, the company's U.S. store count has actually declined. The land grab strategy of old is gone.

Instead, the retailer is focused on improving the stores it already has, and with a base of nearly 5,000 locations across the country and a location within ten miles of 90% of the U.S. population, that seems like the right move. It's already opened 1,000 grocery pickup stations, and expects to add another 1,000 next year. The omnichannel solution has proven successful at driving sales while saving on delivery costs, as bringing perishables to customers' homes has proven logistically difficult and expensive. That's one reason why Amazon acquired Whole Foods last year as Amazon Fresh failed to gain significant market share in groceries.

Walmart is also experimenting with features like Pickup Towers, self-service kiosks for customers to retrieve online orders, and faster returns and pickups for online orders. Stores are increasingly being used to assist the e-commerce business, in addition to conducting traditional retail operations.

Internationally, the company has increasingly partnered with local companies on e-commerce, like JD.com (NASDAQ:JD) in China and Rakuten in Japan, which it just recently announced. Walmart also seems to be reducing its exposure in countries where it has struggled to turn a profit, like Brazil.

Over the coming years, expect Walmart to push further with these strategies. While earnings per share are actually lower than five years ago, the company is in a much better strategic position than it was then: employee turnover is down, customer satisfaction is up, store-based comparable sales are growing, and e-commerce is soaring.

Walmart recently dropped the word "stores" from its corporate name. That should give investors one more insight into where the company's headed over the next five years.