The future is here for Nike (NYSE:NKE)-- again. The sneaker giant just unveiled its first-of-their-kind Epic React Flyknit sneakers. Unlike other Nikes before it, the React has an all-foam sole, and the Swoosh appears to be touting it as its best running shoe ever.

The innovative new foam being used, which the company is calling "Nike React, is touted as offering more cushioning to protect against impact and more bounce to return energy. The sole is also especially lightweight, as it lacks the rubber casing typical to sneaker soles.

In many ways, the Epic React seems to be directed at Adidas's (OTC:ADDYY) Boost technology, which has helped propel the German company to a surprising comeback. 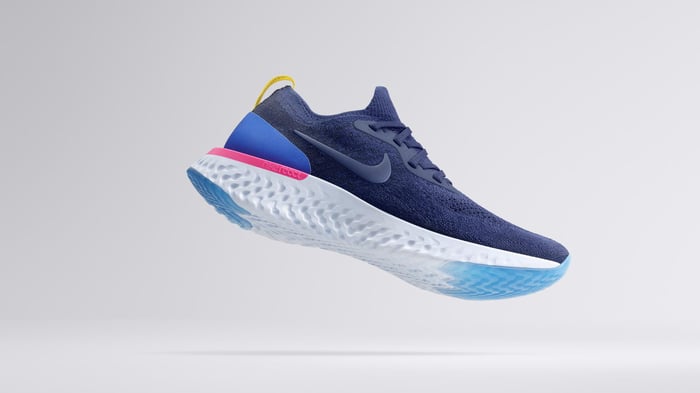 How Adidas got its boost

While Nike and Under Armour have floundered at home lately, with both companies reporting declining revenue in North America, Adidas has been on fire, posting 23% revenue in growth in the region in its most recent quarter. A large part of that success was driven by the company's Boost line of shoes.

Adidas rolled out the Boost technology in 2013, and the Ultra Boost running shoe has since become a hit as both a running sneaker and casual shoe. Like the new Epic React, it features an especially springy foam sole and a sock-like upper that grips the foot evenly. Sales of the sneaker surged after Adidas sponsor Kanye West wore a pair during a concert in 2015. The sneakers soon sold out online.

Those soles became a key component in the Adidas NMD, which was released in 2015, and was so successful that the company struggled to meet demand for shoes that used Boost technology. To combat its product shortfall problem, Adidas made changes that cut production times on 80% of its apparel from 12 to 18 months to just two months -- a shift Nike now seems to be imitating with its Consumer Direct Offense strategy.

Can Nike just do it too?

In the press release for Nike React, Ernest Kim, director of advanced footwear for Nike Running seemed to allude to the Boost when he said, "We're not comparing Nike React technology to some no-name foam that fell off the back of a truck somewhere." However, sneakerheads and the media have already begun drawing comparisons between the two lines. The shoe won't be released for another month -- it's set to come out Feb. 22, retailing at $150 -- so we'll have wait to hear reviews from the masses and get a sense of sales. Nike is also borrowing another page from Adidas by making the shoe in-house, a reflection of the goals outlined last year in its Consumer Direct Offense plan, which include cutting production times in half to less than six months.

Nike shareholders will be counting on new shoes like the React to bring back growth. Not only did North American sales slide 5% overall last quarter, but footwear sales in the region fell by an even sharper 7%. Running is the company's biggest footwear category: It brought in $5.3 billion in sales last fiscal year, more than its basketball and Jordan brands combined. An exciting shoe like the Epic React has the potential to drive growth in that area.

High expectations seem baked into the stock, as shares have risen 26% over the last three months on investor optimism following the company's Investor Day conference, even though its December earnings report featured not only a decline in North American revenue also, but also a 9% drop in net income.

A lot is riding on Nike's latest bet to take back market share -- and buzz -- from Adidas. So pay attention when the Epic React comes out a month from now: Consumer response will tell us a great deal about the fate of Nike's new strategy.