Alphabet (NASDAQ:GOOG) (NASDAQ:GOOGL) subsidiary Google has now closed its $1.1 billion deal to acqui-hire HTC's Pixel team, hardware chief Rick Osterloh announced in a blog post this morning. The deal will dramatically accelerate the search giant's hardware ambitions, as it is picking up thousands of talented engineers to develop its growing portfolio of gadgets. 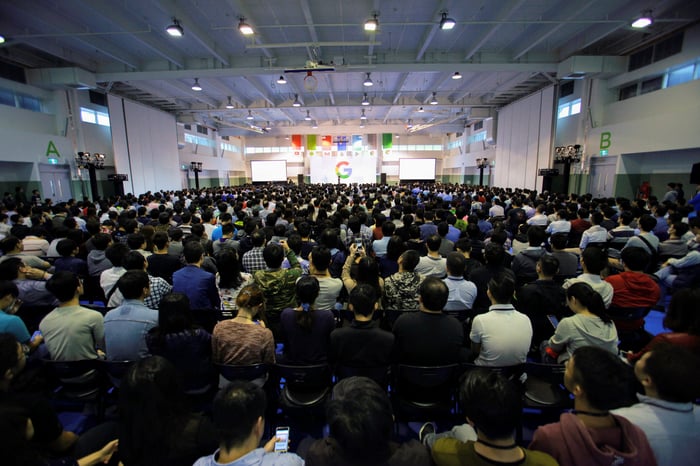 Google is serious about its growing hardware business

Osterloh notes that collectively, the new team has "decades of experience" bringing new products to the smartphone market, and Google collaborated deeply with this team to create the Pixel and Pixel 2. HTC is based in Taiwan, so Google will be expanding its presence in the region. Now that the deal has closed, Taipei will become Google's largest engineering hub in the Asia-Pacific region.

In no uncertain terms, Google has been pushing deeper into first-party hardware over the past three years in an effort to compete more directly with Apple (NASDAQ:AAPL). In fact, Google has incredibly lofty ambitions to even develop its own custom chips, the same strategy that the iPhone maker has been using for nearly a decade. Apple now designs more custom silicon than ever before, including its first GPU.

Osterloh sat down for an interview with Bloomberg and confirmed his plans for more custom silicon going forward. The Pixel 2 features a custom image co-processor -- the company's first -- that Google has dubbed the Pixel Visual Core. This chip helps improve photos using machine learning, and initially focuses on applying HDR+ quickly and efficiently to pictures, but plans on adding new use cases for the custom chip in the future.

With phones these days aggressively expanding into augmented reality (AR) and artificial intelligence (AI), Google really needed deeper integration of hardware and software, according to Osterloh. The hardware chief also confirmed that Google's hardware business is still in the early innings, and plans to invest more in development, marketing, and distribution as Google enters more geographical markets.

While other Android manufacturers may be wary at the prospect of competing directly with their operating system supplier, there's not much they can do about it. Though Google has dabbled in the smartphone market before, including with its older Nexus lineup, the difference this time is scale. Nexus was about showcasing the best of what Android could do, not drive unit volumes.

But Made by Google now includes smartphones, smart speakers, virtual reality (VR) accessories, and wireless neckbuds, among other products. The creepy Clips camera is about to launch, recently obtaining FCC certification earlier this month. Google absolutely now wants to drive meaningful unit volumes with its hardware business, which is a key driver of its "Google other revenues" segment.