Facebook (NASDAQ:FB) shareholders who have held onto their stock have been laughing all the way to the bank; shares are up about 400% since its 2012 IPO. Investors who have followed Facebook for a while will recall a few of things that concerned short-sighted pundits. User saturation was cited as a problem a few years back, for example, as was Facebook's lack of a mobile presence. Then there was derision following the acquisition of non-revenue-producing properties Instagram and WhatsApp.

Yet the Facebook of today has become an online advertising juggernaut with a stock price approaching $200 a share as it heads into its latest quarterly report this week. Of course, past performance is all well and good, but what about 2018? 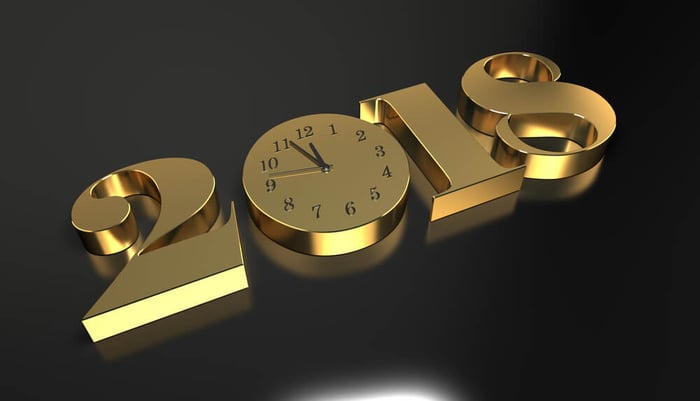 Facebook has more than 2 billion monthly active users (MAUs), and it's expected to report revenue equal about to about $6 for each of them when it reports fourth-quarter earnings on Jan. 31. Yet some pundits are concerned with CEO Mark Zuckerberg's recently announced change to Facebook's news feed, which one analyst estimated drives 85% of the company's revenue. The new system will favor posts from family and friends over posts by businesses.

The changes, according to Barclays analyst Ross Sandler (via MarketWatch), will cut "low single digits" from Facebook's 2018 year-over-year growth estimate, which had been around 39%.

But, as was the case with concerns about user saturation and lack of mobile revenue, the fears about tweaking the news feed seem short-sighted.

If users do spend less time on Facebook, as Zuckerberg predicts, it will be because with more targeted messages and ads, they won't need to spend as much time scrolling to find things of interest. What Zuckerberg gets -- and apparently, many analysts don't -- is that a more meaningful visit to Facebook with fewer ads will drive ad prices up and quite possibly click-through rates.

If you're considering buying Facebook stock in 2018, ignore the naysayers who fear change. What actually matters in determining if Facebook is a buy now is whether it can continue its torrid MAU, revenue, and EPS growth.

Analysts expect to hear that Facebook generated $12.56 billion in revenue in the fourth quarter, and produced EPS of $1.96 a share. If it hits those revenue expectations, that would be a 43% increase from a year ago, while if EPS is on target, it will be an astounding 62% improvement. If those results sound borderline impossible, particularly for a company Facebook's size, its third-quarter results support the idea that they are within a reasonable range.

Last quarter's $10.33 billion in total revenue was a 47% jump from the prior year and at $1.59, EPS was up 77% year over year. Facebook's growth is nothing short of spectacular, especially when you consider it's a more than $550 billion (by market cap) behemoth.

Even with more than half the world's internet users already Facebook "friends," its MAUs rose 16% in Q3. As much as it's growing, it still has plenty of upside left as it keeps monetizing its various properties. The decision to acquire Instagram for $1 billion may not have sat well with some at the time, but it will generate $7 billion in revenue this year, according to one estimate.

Then there's are the billion-plus Messenger MAUs who have yet to be monetized, and a billion more WhatsApp users who are in the early stages of generating revenue. Beyond that, with Facebook's forays into virtual reality (VR) and artificial intelligence (AI), among other things, there are no shortage of potential growth drivers. Zuckerberg's VR plans go beyond the Oculus Rift headset. The company has already tested incorporating VR into the Facebook user experience, not to mention the endless possibilities VR represents for Facebook's 5 million-plus advertisers.

As you may have guessed, I am and have been for years unabashedly bullish on Facebook. Though I was never a fan of Zuckerberg's hoodies from a few years back -- you're a CEO, for heaven's sake! -- he's stuck to his guns every step of the way, and Facebook shareholders are better off because of it.

Better still, there are no potholes or major concerns ahead, but there are multiple avenues for growth. Facebook stock remains an absolute no-brainer buy in 2018.