For most of the past decade, rising costs have been a major headache at JetBlue Airways (NASDAQ:JBLU). Despite the company's steady growth -- which would typically help limit unit cost inflation -- JetBlue's non-fuel cost per available seat mile (CASM) soared from 5.5 cents in 2007 to 8.3 cents in 2017.

This rapid cost growth was driven by rising maintenance costs, steady increases in wage rates, and JetBlue's efforts to continue improving the customer experience. However, the company's 2018 outlook calls for non-fuel CASM to be flat to down after the first quarter. This indicates that JetBlue is on the verge of conquering its cost problems. Let's take a look at why it is on track for better unit cost performance going forward.

JetBlue is the youngest of the major U.S. airlines, and it has grown enormously over the past decade. Annual revenue surpassed $7 billion last year, up from just $2.8 billion 10 years earlier.

JetBlue CFO Steve Priest wants to take advantage of the company's newfound scale to strike more favorable contracts with suppliers. This represents by far the biggest piece of a multiyear plan to reduce structural costs by $250 million-$300 million. New planning and automation tools account for most of the rest of JetBlue's projected savings.

So far, JetBlue has achieved $90 million of annual savings under this plan. While some of those cost reductions don't kick in immediately, it's clear that the structural cost program is already reducing JetBlue's unit cost growth. The impact will be even greater in 2019 and 2020.

Upgauging is finally back on track

Increasing the number of seats per aircraft will also help JetBlue contain its unit cost growth. First, almost all of its aircraft purchases have been Airbus (OTC:EADSY) A321s in recent years. When the A321 is laid out in an "all-core" 200-seat configuration, it has much lower unit costs than the other planes in JetBlue's fleet. 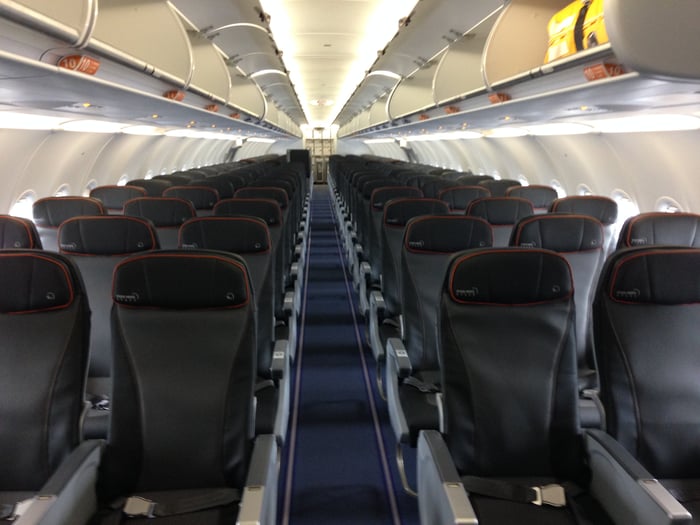 However, JetBlue opted to install its premium Mint configuration on most of its A321 deliveries from Airbus over the past four years. Strong demand for lie-flat seats in the Mint premium cabin has lifted JetBlue's unit revenue. On the flip side, Mint-equipped A321s only have 159 seats, which increases their unit costs.

JetBlue currently plans to take eight of its 11 Airbus A321 deliveries this year in the 200-seat configuration, although it has the flexibility to change its mind for some aircraft arriving later in 2018. The arrival of these 200-seat A321s should help push unit costs down in late 2018 and going forward.

Second, JetBlue is finally ready to start adding seats to its A320 fleet. Over the next three years or so, it will increase the capacity of each of its 130 A320s from 150 seats to 162 seats, thereby reducing unit costs. This plan has been in the works since late 2014, but has been delayed until now due to equipment availability and quality control issues. Most of the benefit from these aircraft modifications will be realized in 2019, 2020, and beyond.

Several years ago, JetBlue's pilots decided to unionize. Since then, JetBlue has been working to negotiate a contract with the pilot union. Some investors are worried that when it reaches a deal -- probably in the next year or two -- the resulting wage increases will break JetBlue's unit cost momentum.

It's true that pilot wages have been rising rapidly across the airline industry. However, JetBlue already implemented a 20% increase to pilot pay over three years, beginning in 2014, followed by an 8% increase last year. Even with these increases, JetBlue needs to raise its pilot wages further to match competitors, but only by around 15%-20%.

JetBlue estimated that the 20% pilot wage increase announced in late 2013 would raise costs by $65 million annually once fully implemented. The company has grown since then, so the annual cost of a new pilot contract might be closer to $100 million. That would represent a roughly 2-percentage-point headwind to non-fuel CASM.

This cost headwind will be manageable, though. After all, JetBlue expects non-fuel unit costs to be flat in 2018 even though most of the benefits from its structural cost program and upgauging will be realized in 2019 and 2020. The future savings from JetBlue's cost initiatives should offset most if not all of the likely pilot pay increase. Solid cost control should help JetBlue post strong earnings growth during the next few years.