There are just certain facets of the craft beer industry that are immutable. Oregon's fertile soil is key to the production of Cascade hops, the most commonly used hops in craft brewing; Boston Beer (NYSE:SAM) is largely considered the face of the craft industry because of the outsized role founder and chairman Jim Koch has played in the popularity of craft beer; and Colorado is home to the Great American Beer Festival, a competition that features some 800 breweries and over 3,800 beers.

Yet despite these mile markers, Oregon, Massachusetts, and Colorado don't rank as the No. 1 state when it comes to the amount of beer produced in its borders. They're also not tops in the number of craft breweries located in the state or in the per capita consumption of craft beer. 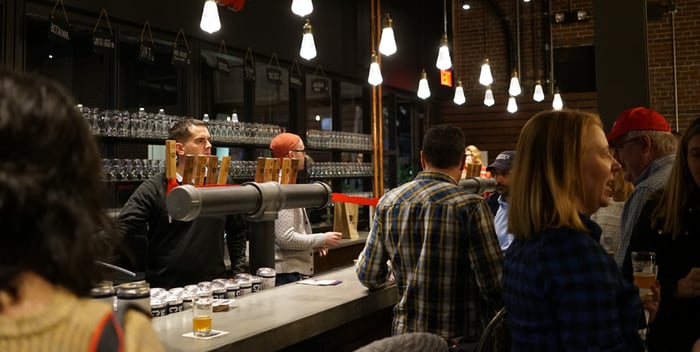 The state of craft beer

The Brewers Association, the craft beer industry's trade group, compiled craft beer sales statistics for 2016, the most current data available, to reveal how the industry impacts individual states, from the amount of beer its citizens drink to the economic benefit craft brewers deliver.

For example, despite its close association with craft brewing through Seattle, which is home to Craft Brew Alliance's (NASDAQ:BREW) Red Hook Brewery and Anheuser-Busch InBev's (NYSE:BUD) Elysian Brewing, the state of Washington is only second in the number of craft breweries operating in the state (334 breweries) and 18th in terms of gallons of craft beer consumed by adults 21 and over (21.7 gallons).

And, of course, just based on its size, you'd expect California to have more craft breweries than anyone else, and with 623, it is far and away the leader. But despite being the most populous state, it only ranks 15th in per capita consumption.

Although the states that play an outsize role in the history of craft beer didn't come out on top, they still rank highly. Like tech companies gathering in Silicon Valley, you'd expect craft brewers to open up in these states simply to be closer to the scene. More surprising might be the per capita consumption rankings.

No other state can quite handle its beer like Vermont, which consumes almost 20 gallons of craft beer per adult each year. Naturally, you'd expect a fairly lightly populated state like the Green Mountain State to rank highly, and with 50 breweries operating within its borders, it also ranks first in the number of breweries per capita.

Even so, nearby New Hampshire is only 17th in terms of gallons consumed and ninth in breweries per capita, while tiny Rhode Island was 37th and 28th, respectively, on a per capita basis.

Of course, Vermont is also home to some of the most well-known craft breweries, such as Long Trail, Magic Hat, and Harpoon.

And that's why Pennsylvania may be the surprising choice at No. 2, since the Keystone State is the sixth most densely populated state in the country with almost 12.8 million people. As noted before, California packs the most people, but it only ranks 15th in per capita consumption.

Perhaps Pennsylvania's position has to do with the fact it is home to both the biggest craft brewery in the U.S. and also the oldest operating brewery in the country, D. G. Yuengling & Son. Ever since the Brewers Association changed its definition of what constitutes a craft brewer to allow the use of adjuncts in the process, Yuengling has topped the list, and displacing Boston Beer as the biggest craft brewer. It is also the fourth-largest brewer in the U.S. behind Anheuser-Busch, Molson Coors, and Pabst.

What craft beer is

Craft beer used to largely follow the Reinheitsgebot, the German purity law that defined beer as made from only hops, barley, and water, but many older U.S. brewers like Yuengling used locally grown ingredients like corn, maize, and rice. The Brewers Association finally agreed such ingredients count as traditional and changed the definition.

Yuengling's inclusion is probably what helps Pennsylvania also to be tops in the total number of barrels of craft beer produced each year, some 3.9 million, comfortably ahead of second place California at 3.3 million barrels.

Despite premature declarations that the craft beer industry is declining, it's clear the industry remains healthy and is one of the few segments still experiencing growth. According to the market researchers at IRI, although beer shipments as a whole tumbled in 2017, that was mostly due to the performance of megabrewers like Anheuser-Busch and Molson Coors.

It's likely when the Brewers Association tabulates its figures for 2017, we'll see the craft industry consumes an even larger percentage of total beer sales than the 12% it notched a year ago. The state of the craft beer industry remains largely as healthy as ever.

The Surprising State That Produces the Most Craft Beer (Hint: It's Not California) @themotleyfool #stocks $BUD $SAM $TAP $BREW Next Article
Current