Shares of networking-hardware maker Extreme Networks (NASDAQ:EXTR) rose as much as 11.5% in Tuesday morning trading. The stock is joining the S&P SmallCap 600 market index before the opening bell on Thursday, replacing Time Inc. (NYSE:TIME), as the magazine and website publisher is being acquired by larger peer Meredith (NYSE:MDP). 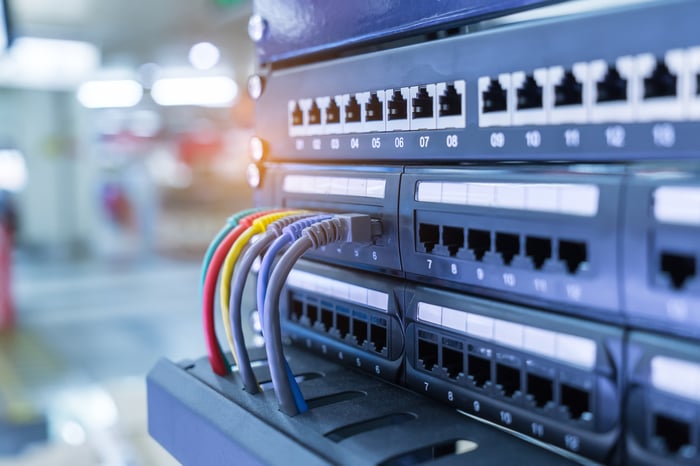 Extreme Networks closed several small, but strategically important, buyouts in 2017, nearly doubling its annual sales and tripling the size of its market cap. It's now on the larger side for an index that tracks stocks with market caps between $450 million and $2.1 billion, and might have to move into a more prestigious index such as the S&P MidCap 400 soon enough. Meanwhile, dozens of regular and exchange-traded funds that follow the SmallCap 600 index will need to buy some Extreme Networks shares.

Meredith is making room for Extreme Networks by acquiring Time, leaving a blank space to fill in the S&P SmallCap 600. The merger puts magazine titles like Better Home and Gardens under the same roof as Fortune and Sports Illustrated, consolidating the publisher space and adding tens of millions of names to its own subscriber Rolodex.

Joining a lower-end market tracker should be an intermediary step for Extreme Networks, whose smart buyouts have created a top-to-bottom portfolio of solutions for data-center networks. The new and improved Extreme moved beyond plain old Ethernet equipment with enterprise-ready WiFi and storage-networking products.

This company is going places, and Extreme's market cap should soon qualify the stock for larger and better-known market indices.