These huge cash investments will pay off in time. Here's how.

Streaming video veteran Netflix (NFLX 2.90%) has its critics. The company may be adding millions of new subscribers every year while also driving revenues higher through price increases, but earnings turned solidly positive only recently, and Netflix is still burning a ton of cash.

So, if you judge investments only on how quickly the company can generate cash for its shareholders, well, Netflix is moving in the wrong direction.

That being said, share prices are soaring near all-time highs, and analysts carry 39 "buy" ratings against just 7 "sells" right now. Somebody out there still thinks Netflix's stock should keep moving higher despite the massive cash burns -- and management has not been shy about committing to several more years of negative cash flows.

Let's make some sense out of that controversial tension between crushing cash losses and soaring share prices.

The tale of the tape

How was Netflix able to produce $559 million of positive GAAP earnings while also burning a cool $2 billion of free cash over the last four quarters? Here are the largest items on Netflix's path from bottom-line earnings to free cash flows in 2017:

Netflix is expanding its content budget year by year. Importantly, those costs are growing slower than the top-line revenues -- and they are slowing down even further while Netflix is accelerating its sales growth: 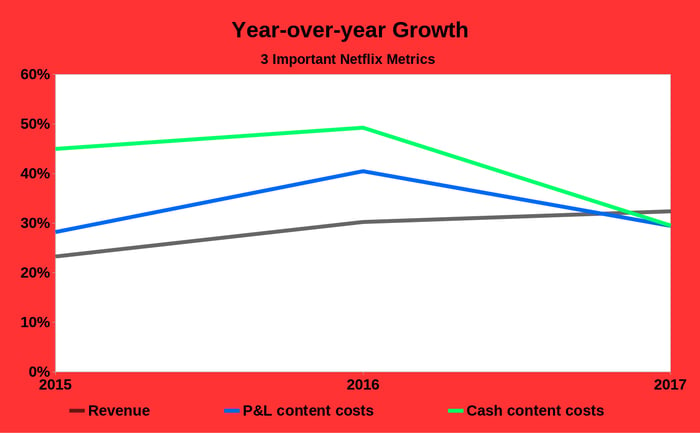 2017 was an important turning point in Netflix's quest for sustainable growth. As you can see in the chart above, revenues increased faster than both accounting-based and cash costs for new content. This was a sharp break from much swifter expense growth in 2016, and like I said, the long-term trends are all pointing to further improvements in the next few years.

Without great content, Netflix will stop its booming sales growth. You should view the billions of dollars spent on content as an investment in future growth and stability. When the company finds a comfortable plateau where the content spending is enough to keep the good times rolling, but any further big jumps simply wouldn't move the needle anymore, we should see cash flows turning positive in a hurry.

Given that original productions often run up their costs a couple of years ahead of their availability to viewers, Netflix is "excited about the growth in future years from the increased investments we are making in original content this year."

Bullish investors are betting on this promise of cash production in the future. Right now, Netflix is putting the pedal to the metal with large and debt-backed investments in tomorrow's eyeball magnets. There is no question in my mind that the cash math will turn positive in the next 5 to 10 years -- and I'm in this investment for the long haul.