After a steep fall in the latter half of 2017, Coeur Mining (NYSE:CDE) shares are off to a strong start this year, tacking on nearly 8% so far, as of the time of this writing. You could either believe the stock is turning around or, if you have a good memory, fear that Coeur's strong start to 2018 is nothing but a dead-cat bounce, just as it had been last year, when the stock kicked off 2017 on a similarly strong note.

If you ask me, I don't think Coeur Mining's rally is a fluke, and I see strong chances that the stock will deliver strong returns this year. Here are three reasons why.

Growth projects should pay off

Higher costs proved to be the biggest growth hurdle for Coeur in 2017 -- it projects its all-in sustaining cost (AISC) to range between $16.25 and $16.75 per silver equivalent ounce (SEO) in fiscal 2017, compared with $16.08 per SEO in 2016, despite strong production growth. Comparatively, rival First Majestic's (NYSE:AG) AISC averaged only $14.10 per payable silver ounce during the first nine months of 2017.

Thankfully, macro headwinds, and not production inefficiencies, were to blame for Coeur's higher costs. Production from its San Bartolome mine in Bolivia, for instance, slumped 30% year over year during the third quarter as drought conditions prevailed. Likewise, record precipitation in Nevada hit production at Coeur's Rochester mine, adding to its costs.

I expect Coeur's cost curve to improve as it expands production. The miner recently released its fiscal 2017 production and sales numbers (Coeur will announce its full-year numbers on Feb. 7), and reported record production of 39.4 million SEO, up 9% from 2016. Its Palmarejo mine in Mexico was the biggest growth driver, with production from the mine jumping 64% in 2017. Thank aggressive drilling and Coeur's smart move to switch from open-pit mining to 100% underground-mining processes in 2016, which is helping extract higher ore grades at lower costs.

Coeur pumped nearly $23 million on exploration during the nine months ended Sept. 30, 2017, compared with only about $7.7 million in the year-ago period, the bulk of which went toward Palmarejo and Kensington, Alaska mines. Together, the two mines contributed almost 43% to Coeur's total revenue in 2016.

Meanwhile, Coeur's recent acquisition of the high-grade Silvertip mine in British Columbia for $200 million should add substantial value in the long run, starting 2018. At full capacity, Silvertip's annual production could hit 10 million SEOs at AISC of only $10.50-$11.50 per SEO. With this acquisition, Coeur also entered the Canadian market, diversifying its geographic footprint further. 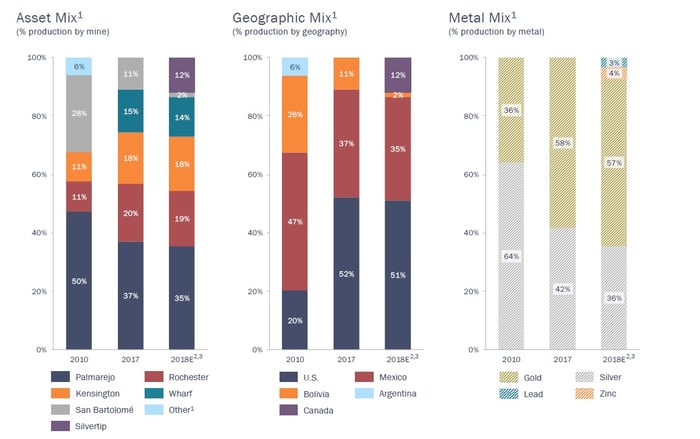 Coeur should get 12% production from Canada in 2018, thanks to Silvertip. Image source: Coeur Mining.

Production isn't the only thing Coeur is focused on -- it is equally serious about bringing its costs down and strengthening its balance sheet. Coeur has consistently generated strong cash flows in recent years, and I expect fiscal 2017 to be one of its strongest years in five years, going by the $139 million that the company generated in operating cash flow during the trailing 12 months.

One of Coeur's biggest cash-flow drivers is its recently amended streaming agreement with streaming and royalty company Franco-Nevada Corp (TSX:FNV). Under the deal, Coeur will sell 50% of the gold produced from Palmarejo at $800 an ounce to Franco-Nevada. Earlier, the same stream was fetching Coeur only $416 per ounce of gold.

Aside from Palmarejo, Coeur expects Silvertip to "meaningfully grow" its production and cash flow beginning this year. As I elucidated in one of my articles on gold-mining stocks, cash flow is a better metric to judge a miner's health than net income. From that standpoint, Coeur is on solid footing, as it's been free cash flow-positive in four out of the past five years. I expect the trend to continue in 2018.

No matter which peer stock you look at, Coeur is one of the cheapest stocks in the silver-mining industry today, trading at less than 11 times price-to-cash flow. 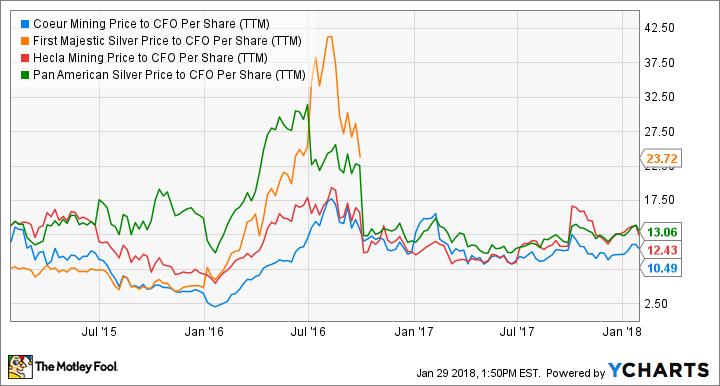 CDE Price to CFO Per Share (TTM) data by YCharts

With Palmarejo, Kensington, and Silvertip displaying strong cash-flow potential, Coeur looks like a bargain at current price. If the miner can deliver strong operational numbers, especially cash flows, through the year -- which I believe it will -- the stock could catch up to its rivals in no time.