Around 350 million people across the world suffer from arthritis, with over 54 million Americans in that group. Treating arthritis costs at least $81 billion each year. It's not surprising that three of the five top-selling drugs in the world in 2017 treated at least one type of arthritis.

While most of these companies continue to enjoy commercial success with their arthritis drugs, some also face challenges. Which of these top arthritis drug/treatment stocks are the best on the market right now? I think two especially stand out. 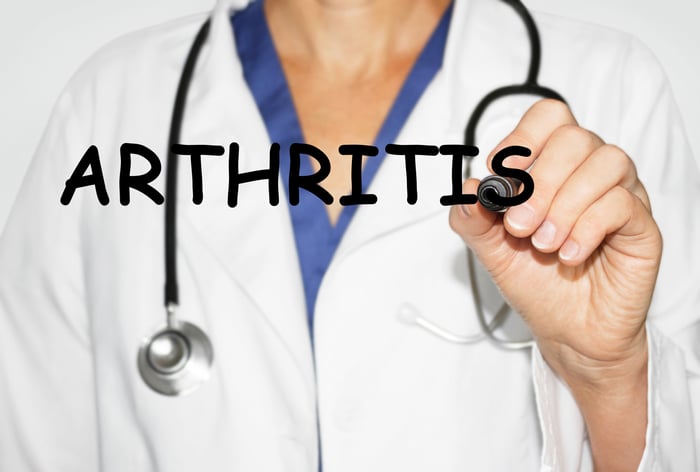 AbbVie claims the best-selling drug in the world with Humira. The drug is approved for treating multiple autoimmune diseases, including rheumatoid arthritis and psoriatic arthritis. Humira generated a whopping $18.4 billion in 2017, around 65% of AbbVie's total revenue last year.

The company expects Humira's sales growth will continue for the next few years, with revenue for the drug approaching $21 billion by 2020. However, Humira will face biosimilar competition in Europe beginning later this year. Biosimilar rivals will also enter the U.S. market by early 2023. Still, though, AbbVie CEO Rick Gonzalez stated at a recent conference that the company expects "manageable erosion" in sales for Humira and that the drug will continue to generate significant cash flow through 2025 and beyond.

AbbVie also has rising stars that have already gained regulatory approval that should help make up for future market share losses for Humira. The company's biggest moneymaker outside of Humira right now is cancer drug Imbruvica, which continues to enjoy strong sales momentum. AbbVie also launched Mavyret in 2017. The hepatitis C drug is expected to become AbbVie's next blockbuster.

These winning ways appear likely to continue. AbbVie recently announced that it expects to increase adjusted EPS by 32% in 2018, thanks in large part to a positive impact from U.S. tax reform. With that kind of earnings growth combined with a dividend yield of 2.3%, I think AbbVie is hard to beat. 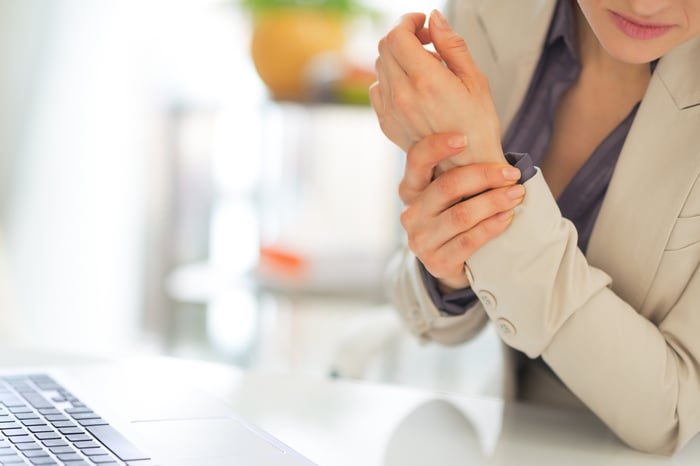 Celgene is the only big biopharmaceutical company to enjoy faster revenue growth than AbbVie in recent years. Much of Celgene's success stemmed from its blockbuster blood cancer drug Revlimid. However, Celgene has also experienced tremendous growth from Otezla, the company's oral drug for treating psoriasis and psoriatic arthritis.

Some investors might have been concerned after Celgene's third-quarter 2017 results that Otezla was in trouble. The biotech reported disappointing results after facing headwinds for its autoimmune-disease drug. However, Celgene should have put those worries to rest with fourth-quarter results announced in January 2018.

Terri Curran, Celgene's president of inflammation and immunology, noted that sales for Otezla jumped 22% year over year in the fourth quarter. Even better, Otezla's performance was 20% above the third-quarter results. Curran also pointed to improving patient access in the U.S. and successful launches in key international markets for Otezla.

Celgene doesn't have any pipeline candidates for treatment of arthritis lined up to join Otezla. However, the company does have several promising autoimmune-disease drugs in development. The most eagerly anticipated one is ozanimod. Celgene hopes to win approval in 2018 for the drug for its first indication, relapsed multiple sclerosis. Ozanimod is also being evaluated in a late-stage study for treatment of ulcerative colitis and a phase 2 study for treating Crohn's disease.

Hematology and oncology continue to be the strongest areas for Celgene, though. The company's blood cancer franchise, currently featuring Revlimid and Pomalyst, could add another potential blockbuster if luspatercept proves to be successful in late-stage studies targeting treatment of myelodysplastic syndromes and beta-thalassemia. Celgene's pending acquisition of Juno Therapeutics also positions the biotech well in competing in cell therapy treatment of cancer.

With strong sales continuing for its current blockbusters and a deep pipeline, Celgene thinks that it will grow adjusted EPS by close to 20% over the next few years. Its stock is trading at less than 10 times expected earnings. That's dirt cheap for a company with the prospects that Celgene has, making it one of the more attractive stocks around.

I definitely like AbbVie and Celgene as the best arthritis drug/treatment stocks on the market. There are other solid picks as well, though.

Johnson & Johnson is a perennial favorite for investors. Although sales for its top arthritis drug, Remicade, are falling in the face of biosimilar competition, J&J has other drugs that are offsetting some of the decline, including another arthritis drug, Stelara. The company has also made acquisitions to drive more growth. I wouldn't bet against J&J over the long run.

Pfizer is another pharma stock that I think has solid long-term prospects. While blockbuster arthritis drug Enbrel is struggling, Pfizer's Xeljanz is generating strong sales growth. The company is also getting help from other areas, particularly anticoagulant Eliquis. Pfizer's biosimilars, led by Inflectra (which competes against J&J's Remicade), should also pick up steam.

I think Bristol-Myers Squibb is a good pick also -- although not because of its arthritis drug, Orencia. The main reason to like Bristol is its blockbuster immunotherapy Opdivo. With its potential for being used in combinations with several other drugs, Opdivo could be the world's second-best-selling cancer drug after Revlimid over the next few years.