Wabash National (NYSE:WNC) spent much of 2017 tempering investors' expectations for the year. The prior year's blockbuster results were going to be extremely hard to replicate in the cyclical truck trailer business. In the end, though, 2017's results turned out to be more or less on par with the prior year's thanks to an acquisition and a pickup in sales in the second half of the year.

Let's take a look at Wabash's fourth-quarter earnings numbers to see what made 2017 turn out better than originally expected.

Heading into 2017, Wabash's management expected the year to be slightly worse than the record year in 2016. When the dust settled on 2017, though, it turned in a respectable result. While the company's profit margins may have suffered, it was able to make up much of the difference with higher than originally anticipated volume for the year. In the fourth quarter, the company shipped 16,750 new and used trailers, which led to hitting the high side of management's guidance for 2017, with a total of 56,200 total trailers for the year.

While fourth-quarter earnings were good, they weren't $0.80-per-share good. A lot of that gain relates to a one-time tax benefit of $32 million that reflects the change in U.S. tax policy. Without one-time benefits and integration expenses for its Supreme Industries acquisition in the third quarter, earnings were $0.36 per share.

Also, it should be noted that the fourth quarter is when Wabash draws down a lot of inventory and reduces its working capital. As a result, the company's free cash flow results were much better than the third quarter. That's encouraging because management thought its cash flow generation was plentiful enough that it could get back to buying back stock. Wabash bought back about $27 million worth of shares in the quarter. 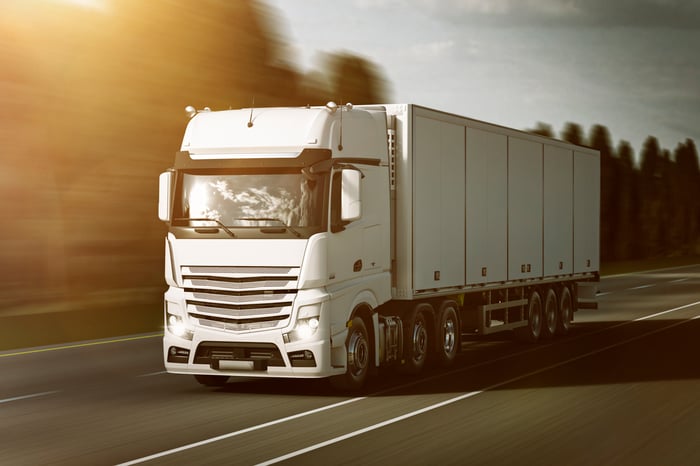 Here's what CEO Dick Giromini said about Wabash's performance in 2017:

Operationally, following our fifth consecutive record year of profitability in 2016, a small reset was seemingly inevitable at some point. Despite a somewhat more challenging year for parts of our core businesses, we are nonetheless proud of the team's efforts in overcoming many of the headwinds throughout the year, leading us to the strong finish in the fourth quarter that positioned us for new levels of success in 2018. New trailer shipments of 55,050 for the year were near the top-end of our previous guidance and we begin 2018 with a historically strong backlog of orders totaling $1.2 billion, an increase of 64 percent compared to the previous quarter.

In 2018 we expect to ship in the range of 56,000 to 60,000 trailer units, along with 22,000 to 24,000 truck body units, for a revenue projection of $2.05 billion to $2.15 billion. While the first quarter will be slow out of the gate due to timing of shipments, we believe that pace will accelerate beginning in the second quarter and throughout the balance of the year. Based on those, and other demand and cost assumptions, we project full-year earnings of $1.86 to $2.02 per diluted share.

Wabash also announced that Giromini would be stepping down in June of this year and that current COO Brent Yeagy would succeed him. 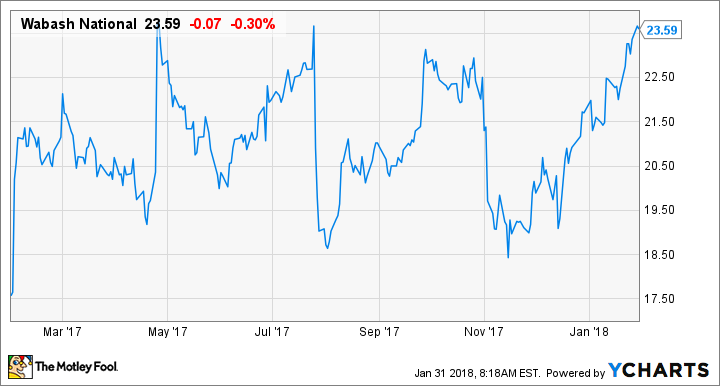 It was encouraging to see Wabash turn in a fourth quarter that was at least on par with its fantastic 2016 result. Also, the company's 2018 guidance looks quite promising. The one thing that is a little discouraging was margin contraction compared to the prior year. Part of those smaller margins had to do with the acquisition of Supreme and the costs associated with the integration. Hopefully, management will be able to complete the integration and get its operating margin back up into the 9%-10% range.

All in all, though, Wabash looks to be in good shape. Net income results remain positive and the company is generating enough free cash flow to support its dividend and share repurchase program. In a cyclical business like this, having extra cash to manufacture some EPS growth can make a big difference over time. Shares of Wabash remain relatively cheap, so any investor looking for a value stock in today's market should take a look at Wabash.