There are two ways you could look at Wabash National's (NYSE:WNC) most recent earnings results. You can focus on the large year-over-year declines in revenue and profitability, or you can focus on the fact that management raised its guidance for trailer sales. That guidance even comes before Wabash's most recent acquisition that should help diversify Wabash's product offerings.

Let's take a look at Wabash's third-quarter results, and what investors can take away from this most recent earnings report. 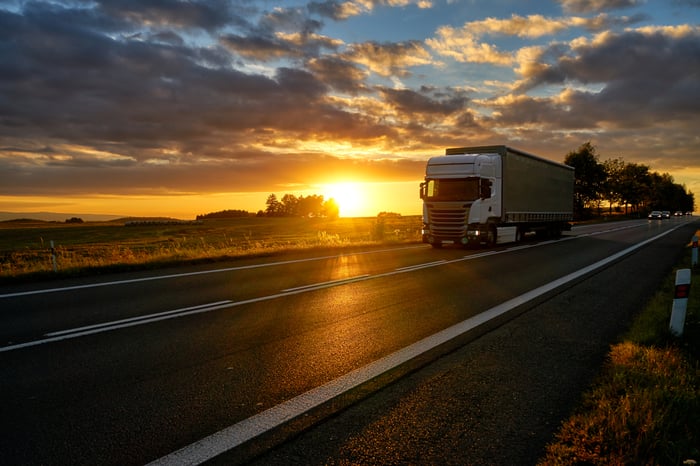 Here's one thing to consider when looking at Wabash's most recent results: 2016 was the best year on record for the company, and 2017 results were expected to be weaker than the prior year. Even though the third-quarter results don't stack up to this time last year, they hold their own. Wabash shipped 13,900 trailers in the quarter compared to 15,450 last year. Also, margins slipped slightly as lower shipments, higher material costs, and labor shortages lead to extra overtime.

Another encouraging sign this past quarter was that management bumped its guidance up again. It now expects to ship between 53,500 to 56,500 trailers in fiscal 2017, and its earnings guidance is $1.33 to 1.37 per share.

One thing that looks concerning is Wabash's declining free cash flow results. This has a lot to do with an unusually large working capital drawdown in the first quarter of 2017. Since then, the company has been building working capital, especially since it closed its most recent acquisition.

Wabash recently completed its acquisition of truck-body manufacturer Supreme Industries. The all-cash deal valued Supreme at just over $350 million. Management funded the acquisition with the issuance of $325 million in senior notes, due 2025. The acquisition also meant that management put the brakes on its share repurchase program. After buying back $33 million in stock in the second quarter, management only repurchased $3.8 million in shares this quarter .

As part of the press release statement, CEO Dick Giromini gave his outlook for 2018.

Looking forward to next year, a strengthening economy driving increased trucking demand, strong year-over-year backlog, increasing market interest in our proprietary molded structural composite technology, the addition of Supreme, and the upcoming payback from increased investment in productivity-enhancing technologies in our van operations, all have me excited about what we will deliver in 2018 and beyond.  Overall demand for van trailers within our Commercial Trailer Products segment is projected to remain historically strong for next year, combined with a much-improved demand environment for tank trailers and flatbed equipment. This belief is further supported by several factors, including a growing replacement cycle for 2004-2006 dry vans, a more stringent regulatory environment influencing both carrier and driver behaviors and the continued need to refresh equipment. 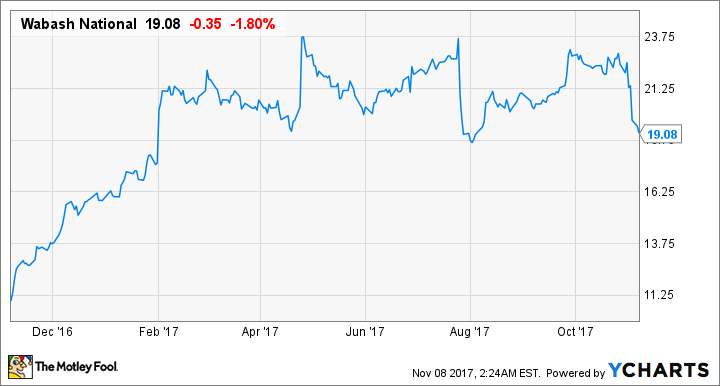 The recent acquisition of Supreme is a potential sign that management thinks trailer sales are at a plateau, and it needs to diversify its revenue stream by getting deeper into the truck-body business. The company already had a presence in this segment with its dry and refrigerated truck-body segment it introduced back in 2015. Moves like this are also a clear sign that management thinks last-mile delivery is still on the ups, thanks to e-commerce. Based on the growth of online retail and the growing demand for less-than-truckload services, it's hard to find a flaw in that logic.

Chances are, we're likely going to see flat to slightly declining results for Wabash's commercial trailer business. The hope is that its forays into truck bodies will help to offset those results over time. The question remains whether the company can replicate the high rates of returns it has generated in the past few years with this new venture.