Stocks seesawed Wednesday but ultimately closed the month on a positive note. The Dow Jones Industrial Average (DJINDICES:^DJI) and the S&P 500 (SNPINDEX:^GSPC) both posted small gains.

As for individual stocks, Shutterfly (NASDAQ:SFLY) flew higher after reporting a strong quarter and a big acquisition, and Eli Lilly and Company (NYSE:LLY) slumped despite beating Q4 expectations and raising its outlook. 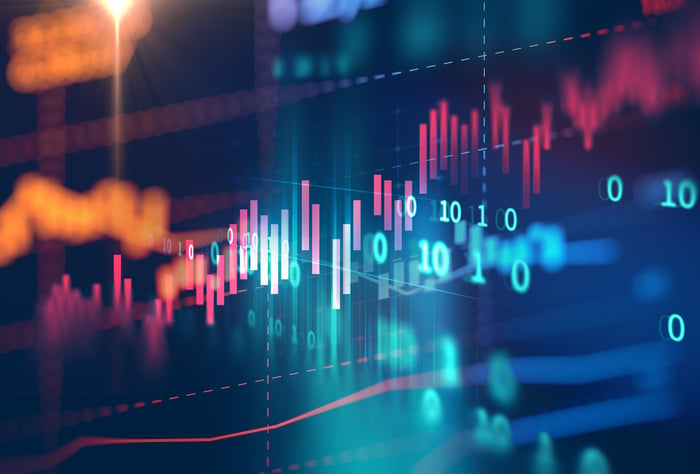 Shares of Shutterfly soared 27.8% after the company announced better-than-expected fourth-quarter results and the acquisition of school photographer Lifetouch for $825 million in cash. Sales increased 5.8% to $594 million and non-GAAP earnings per share jumped 18.3% to $3.11. Excluding a one-time tax benefit, GAAP earnings were $3.37 per share. The company had guided to revenue of between $538 million and $536 million, and GAAP EPS of between $2.60 and $3.00. For the full year, revenue was up 5% to $1.19 billion and adjusted EPS more than doubled to $1.05.

Privately held Lifetouch is the national leader in school photography, photographing 25 million school children annually in over 50,000 schools. In its most recent fiscal year, it had revenue of $964 million and EBITDA of $111 million. Shutterfly will finance the purchase with new debt and will suspend its share repurchase program after having bought back $110 million of its stock in 2017.

The Q4 results would have probably been enough to give the stock a pop on their own, as the company's strategy of slimming down and simplifying its offerings by shutting down less-productive sites is obviously working to make big boosts to profit and cash flow despite some lost revenue. But investors also rightly cheered the acquisition, priced at less than one times sales and holding plenty of potential for cross-selling across the two customer bases.

Pharma giant Eli Lilly reported earnings that soundly beat Wall Street expectations and raised guidance for 2018 profit, but still saw shares slump 5.4%. Revenue increased 6.9% to $6.16 billion with non-GAAP EPS of $1.14, excluding a $1.9 billion charge due to the new tax law. Analysts were expecting Lilly to earn $1.07 on sales of $5.94 billion.

"Lilly's new products, including Trulicity, Taltz and Jardiance, continued to drive solid revenue growth in the fourth quarter of 2017, while we maintained flat operating expenses," said Chairman and CEO David A. Ricks in the press release. "Momentum continues for our innovation-based strategy. We recently received approval for Taltz in the U.S. and European Union for active psoriatic arthritis, are encouraged by early use of Verzenio for breast cancer and expect further pipeline progress in 2018 in areas of significant patient need, including cancer, immunologic disorders, diabetes, neurodegeneration and pain."

It's hard to find anything to complain about in Lilly's Q4 results, and indeed the stock began the day higher before slumping in the opening minutes. Sales of newly released drugs more than doubled, and Lilly reported that it may use more than $9 billion in cash held by global affiliates thanks to the new tax law. But investors are nervous about the future of drug prices, and most big pharma stocks were caught in a downdraft today.