The chip giant's fourth-quarter results blew Wall Street's estimates out of the water. Analysts are finding room to love both Chipzilla and smaller rival AMD these days.

Shares of Intel (INTC 3.21%) soared on Friday, Jan. 26, following the release of sensational fourth-quarter results. The semiconductor giant's stock closed 10.5% higher that day, at price levels not seen since the dot-com boom 18 years ago.

In the fourth quarter, Intel's adjusted earnings rose 24% year over year to land at $1.08 per diluted share. Top-line sales increased 4% to $17.1 billion. Both results ran way ahead of Wall Street's targets, which called for earnings of $0.87 per share on sales near $16.3 billion.

The strong bottom-line results were obscured from Intel's GAAP results by a $5.4 billion one-time tax charge, as the Trump administration's new tax rules took effect. But these expenses don't figure into non-GAAP metrics, freeing investors to focus on a permanent effective tax rate drop from 20% to 14%.

The PC division delivered $9 billion of fourth-quarter sales, falling 2% year-over-year in the holiday quarter. CFO Bob Swan said that the PC business "continued to execute well in a declining market while the growth of our data-centric businesses shows Intel's transformation is on track."

Management also addressed the Spectre and Meltdown security flaws in their earnings call with analysts, insisting that they aren't affecting chip sales in the ongoing first quarter. Nevertheless, Intel's chip architectures are being redesigned to avoid these security threats on a hardware-based level, with the first built-in mitigations appearing later this year. That's good news if you had been worried about Meltdown and Spectre scaring customers away from using Intel's processors, since there are no signs of a significant business impact here. 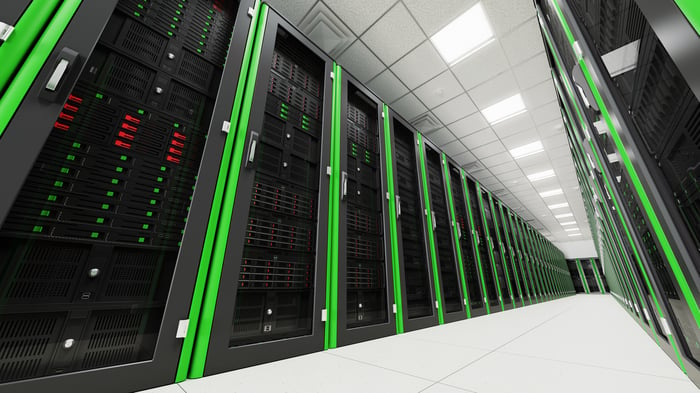 Sector rival Advanced Micro Devices (AMD 5.64%) followed up with a solid earnings report of its own this week, triggering another round of cheerful analyst notes. Some of the same analysts who celebrated Intel's report also argued that AMD is stealing market share from its larger competitor in both the PC and data center markets.

I agree that the sands are shifting under the PC market, where Intel seems happy to give up low-margin ground to AMD. But the plucky underdog is more likely carving out a specialized niche for itself, based on processors originally designed to handle digital graphics rather than the intense cryptocurrency and artificial intelligence number crunching they are doing in modern data centers. Meanwhile, Intel's data center group grew its sales by 20% year-over-year to $5.6 billion, adding as much fourth-quarter business in the space of 12 months as AMD's entire Q4 computing and graphics revenues.

It's refreshing to see AMD finally playing the part of a credible competitor, but it's a bit much to call the company a threat to Intel. That's why many analysts can praise both companies in a single breath, cheering AMD's drawn-out turnaround effort without losing sight of Intel's consistent results on a greater scale.