The chipmaker just forked over $16.7 billion so that it can boost its position with Altera's tech -- and it will, if it can move fast enough.

Intel (INTC 0.43%) recently dug very deep into its pockets to complete its acquisition of Altera (NASDAQ: ALTR). At $16.7 billion, the purchase is Intel's largest to date, and while some have questioned the acquisition's price tag, Intel is instead focusing on what the company can achieve with its new business.

The Wall Street Journal noted last week that Intel will now be the second-largest maker of chips that can be programmed after they leave the factory. The programmable aspect of Altera's chips is the key reason Intel made the purchase -- and it helps bolster Intel's enterprise prospects.

The opportunity
Altera makes what are called field programmable gate array (FPGA) chips, which allow companies to tweak processors in order to better serve their needs. As WSJ noted, Facebook, Google, and Microsoft use Intel's Xeon processors for most of their heavy-duty processing, but they use them in combination with Altera's FPGA's so that they can get the chips to perform even better.

Now that Altera is part of Intel, the chipmaker can package Xeon processors with Altera's FPGAs and offer the complete solution to companies. Intel says it'll start pairing the two chips sometime this year, which will boost performance by up to 50%. 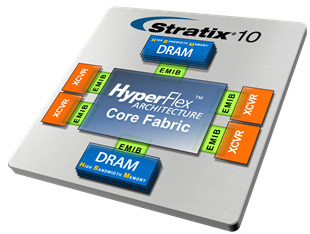 But Intel wants to take this one step further and build the FPGAs directly into one single chip, which could make the processors two times faster than they currently are.

Intel believes this performance bump will allow for new technologies to emerge, and for existing ones to get better. In a press release, Intel CEO Brian Krzanich said, "We will apply Moore's Law to grow today's FPGA business, and we'll invent new products that make amazing experiences of the future possible -- experiences like autonomous driving and machine learning."

This could give Intel a massive opportunity to sell some of the most advanced processors on the market, but the FPGA integration into a single chip won't happen until after this year. Intel isn't saying exactly when they'll be available, which opens up some obstacles for the company.

As fellow Fool Ashraf Eassa recently wrote, Xilinx and Taiwan Semicondutor are further along in their FPGA integration process than Intel is, and have already made an integrated FPGA chip for sampling. Considering Intel hasn't released an FPGA integrated chip sample, it suggests Xilinix could outpace Intel and Altera in this space.

If Intel falls behind Xilinix in releasing an integrated chip, it won't mean the Altera purchase was all for naught, but it'll force Intel to play catch-up in space where it currently has the opportunity to take the lead.

While we'll have to wait and see whether $16.7 billion was the right price to pay for Altera, Intel has smartly acquired a company that will help make its own processors perform much better than before, and allow the company to build processors that are more adaptable and able to handle even more complex tasks -- which can only be a good thing for the chipmaker.