The company's recent moves should help sustain its impressive momentum this year.

Nutanix (NTNX 3.34%) turned around its fortunes impressively last year. The hybrid cloud-computing specialist was originally said to be losing market share to bigger rivals in the enterprise cloud market, but a string of impressive quarterly results and rapid client growth put such fears to rest.

Nutanix has entered 2018 on a strong footing, but does it have enough catalysts left to build upon last year's 33% rally? Let's find out. 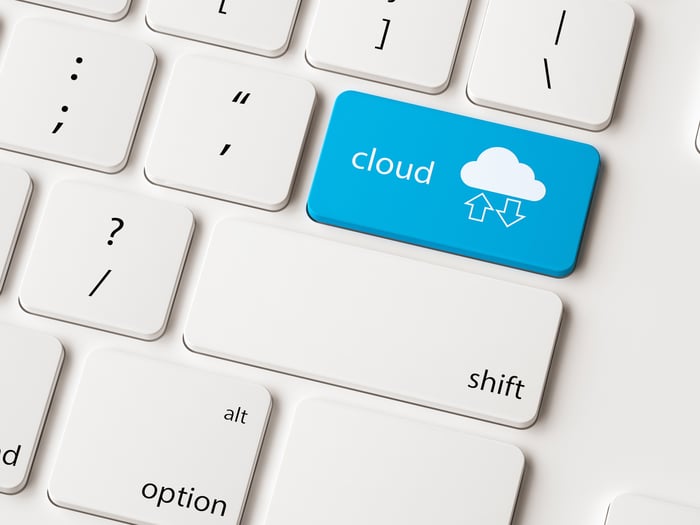 Nutanix's deferred revenue is growing at a fast clip thanks to strong demand for its products and services. In the first quarter of the latest fiscal year, the company's deferred revenue shot up 48% year over year to $409 million.

Deferred revenue is the advance received by a company in lieu of services that will be provided at a later date. This line item is commonly found in companies selling services or a product based on a subscription model. A rapidly growing deferred revenue base is a positive, as it indicates that a company can sell subscriptions at an impressive pace.

Nutanix's deferred revenue increased at a faster pace than its actual revenue in the previously reported quarter. This could mean that its recently introduced platforms to manage the hybrid cloud infrastructure are finding traction among customers, and there are statistics to back this up.

During the first quarter, Nutanix's customer base grew by 75% year over year to a total of 7,813 accounts. There were 40 customers that struck deals of $1 million or more with Nutanix during the quarter, an increase of 39% from the year-ago period. In all, the company has now built a base of 478 customers that have spent over $1 million on its products and services.

There's plenty of room for Nutanix's customer base to keep growing, as the hyper-converged cloud computing space that the company targets is expected to grow at an annual rate of 43% through 2022, according to Markets and Markets.

Nutanix doesn't want to miss this boom, so it has been constantly improving its services. Its recently released Nutanix Calm platform is designed to help customers launch applications in the cloud across both public and private infrastructures. For example, customers with Nutanix Calm can use their on-premise private infrastructure from IBM to launch an application on the Google Cloud platform.

So this software-based platform is independent of the cloud service provider or the hardware type, allowing clients to deploy a hyper-converged architecture while keeping costs in check. Nutanix seems well placed to boost sales going forward, but this doesn't mean it is overlooking profitability.

The switch to software will boost margins

Nutanix recently announced that it will pivot its business to a software-only model, a move that Wall Street had anticipated for a long time. The company's hardware business was weighing on its margins, as evidenced by a decline of 3.5% in the last reported quarter.

Nutanix now claims that the gross margin of its software business exceeds 80%, up significantly from the 61.9% gross margin during the first quarter. So a move away from the lower-margin hardware sales will definitely boost its bottom line, as sales of hardware at pass-through (or zero) margin accounted for a quarter of its billings in the previous fiscal year.

Billings refer to the binding purchase orders that Nutanix has received, so the elimination of hardware-related sales will have a negative impact on its top-line growth in the short run. But the long-term gains will be substantial, with FBN Securities estimating that Nutanix's gross margin could jump as much as 20 points over the next couple of years thanks to the business model switch.

More important, Nutanix is already making a concerted push toward profitability. Last quarter, its GAAP net loss fell to just $61.5 million as compared to $140.3 million in the prior-year period. This means that the transition to a software-only sales model will accelerate the move toward being profitable.

Nutanix is making the right moves to take advantage of the hyper-converged cloud infrastructure market. The company's client base is increasing at an impressive rate, and Nutanix looks ready to improve margins because of its latest initiative, setting the stage for more upside this year.