Please ensure Javascript is enabled for purposes of website accessibility
Log In Help Join The Motley Fool
Free Article Join Over 1 Million Premium Members And Get More In-Depth Stock Guidance and Research
By Matthew Frankel, CFP® - Feb 2, 2018 at 7:07AM

There are some good stocks that could profit from blockchain technology, but these four aren't in that category.

When the internet exploded in the late 1990s, billions, if not trillions, of investor money poured into internet stocks. There were two types of companies -- some that had an actual, sustainable business, such as Microsoft and Amazon.com, which worked out well for investors over the long run.

And then there were speculative internet stocks, which represented companies with no real businesses, or unsustainable business models -- but with words like "internet," "dot-com," and other buzzwords in their titles and descriptions. As you may remember, these didn't work out well for investors.

A similar trend is playing out in the young and growing digital currency industry. Sure, there are some companies that could end up making lots of money from blockchain technology, but most so-called "bitcoin," "cryptocurrency," or "blockchain" stocks are speculative vehicles whose underlying businesses don't justify their price tags. Here are four examples to stay away from. 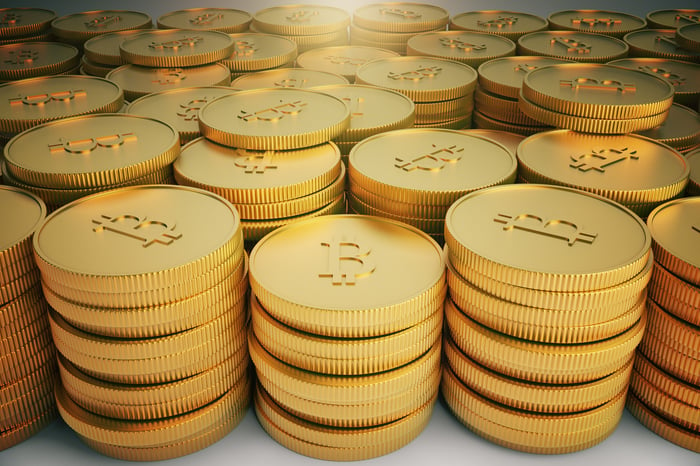 This small over-the-counter stock surged in 2017, and refers to itself as "the world's most prolific generator of cryptocurrencies."

The company develops new digital currencies and blockchain technologies, but has little going for it to justify its market cap of more than $250 million. There are nine projects currently listed on its website, but as my colleague Jordan Wathen recently wrote, most of them are of the "coming soon" variety and the company's other assets mainly consist of some thinly traded cryptocurrencies (like WEED coin).

Also, First Bitcoin has changed its name, focus, or country five times in just a dozen years, which should be a major red flag to investors.

This is another example of a failing company that changed its focus to try to ride the cryptocurrency wave. Until October 2017, Riot was known as Bioptix, and before November 2016, it was Venaxis. Then, less than four months ago, the struggling biotech company abruptly changed its name and shifted its focus to blockchain-based investments.

Riot Blockchain initially announced an investment in Canadian cryptocurrency exchange Coinsquare, and has also made a few other investments since then, particularly in bitcoin miners. However, the company's assets don't come close to justifying its share price -- this is purely a speculative bet.

Yet another red flag when it comes to Riot Blockchain is that the company's CEO recently unloaded more than 30,000 shares of the stock at an average sales price of $28.61, roughly double the current share price. When insiders start to head for the exits this early in a new venture (remember, the company has only been blockchain-focused for less than four months), it's certainly a troubling sign.

The Greyscale Bitcoin Investment Trust essentially functions as an exchange-traded fund, or ETF, that allows investors to pool their money to buy bitcoin. On the surface, this seems no worse than simply buying bitcoins yourself on an exchange.

The problem is the premium you pay. To be fair, an investment fund of this nature deserves to trade at a mild premium. After all, buying bitcoins on an exchange can be complicated and can also come with high transaction fees. And it also deserves a management fee for the services provided -- someone has to actually buy the bitcoin and ensure its safety from hackers.

However, it's not worth the premium you pay. As of Jan. 29, 2018, each share of the trust represented 0.00100733 bitcoins. Based on the $10,400 market value of bitcoin as of this writing, this means that each share's intrinsic value is $10.48. Shares of the trust are trading for $18.25 -- a massive 74% premium over the value of the bitcoin owned. In addition, the annual management fee of 2% is several times more than you'd pay on a similar gold, silver, or commodity-based ETF.

The bottom line: If you want to own bitcoin, you're better off simply buying bitcoin.

Shares of Eastman Kodak (yes, the camera company) have more than tripled in 2018. And it's not because the company came out with new, innovative photography equipment or anything like that. It simply decided to join in the cryptocurrency boom, and the stock jumped.

To be fair, the premise sounds reasonable. The market for image and video rights is a big one, and a centralized, efficient platform to manage it could be a moneymaker.

Kodak plans to create an image and licensing marketplace using blockchain technology, where people will be able to purchase rights using a newly created digital currency called KODAKCoin. Why people couldn't simply use U.S. dollars, or other currencies, is unclear. Instead of simplifying the process, or solving a problem, it seems to add complexity. To put it mildly, it seems like a long and difficult road ahead.

The takeaway and how to invest instead

Investing in stocks that simply add "blockchain" or "bitcoin" to their name, funds that trade at ridiculous premiums to the value of the bitcoin they own, or established but struggling companies that suddenly jump into the cryptocurrency space aren't the best way to get a piece of the upcoming cryptocurrency or blockchain industry.

Instead, my suggestion is to look at some thriving businesses that could also benefit if cryptocurrencies and blockchain technology continue to gain momentum. Payment-processing company Square (SQ -4.25%) is a name that comes to mind, as the core business is growing at a breathtaking rate, and the company is experimenting with bitcoin on its Square Cash app. Or American Express (AXP -0.49%), whose credit card business is firing on all cylinders, and is also partnering with cryptocurrency company Ripple to develop a more efficient payment transfer system.

If you want to gamble, buy bitcoin or another cryptocurrency or invest in one of the four stocks I discussed above. If you want to invest, you're better off looking elsewhere.