Scandals and sluggish growth made for a year that was not a standout for the storied bank.

Nearly all of the "big four" banks in the U.S. -- Wells Fargo (WFC), JPMorgan Chase (JPM), Bank of America (BAC), and Citigroup (C) -- had a fine 2017. Their fundamentals and stock prices rose notably on strong macroeconomic factors, slowly rising interest rates, potentially looser regulation, and a new tax regime that could net them billions of dollars in additional profits.

Wells Fargo was an unhappy exception. Bad choices by the bank seemed to harm client trust, which hurt fundamentals, which leeched enthusiasm for the stock. In Wells Fargo's long and occasionally glorious history, 2017 wasn't exactly a year to remember.

Wells Fargo's biggest problem in 2017 was the scandals that plagued it during the year. The mother of these, the "fake accounts scandal," actually broke late in 2016. But last year it was discovered that this affected more customers than initially reported.

On top of that, the bank engendered a similar controversy by apparently, let's say, volunteering certain customers for auto insurance products they didn't actually buy. Not one to go small, the bank was also accused of charging clients improper fees tied to mortgages.

In the company's latest reported quarter (Q4 of fiscal 2017), revenue inched up by 2% on a year-over-year basis, landing at $22.1 billion. At least there was an increase; in the three preceding quarters, the bank either flat-lined or saw declines in the top line.

Per-share adjusted net income, meanwhile, rose just slightly to $0.97 from the year-ago quarter's $0.96. Loans were down, however, slipping by 1%, while deposits fell by 2%. The efficiency ratio of the once admirably lean bank jumped to 76% from the year-ago 66% -- which was already a high figure for the company.

And this was generally a great year for banks. Wells Fargo's Q4 profitability came in under analyst expectations, marking the second time in fiscal 2017 that occurred. By contrast, JPMorgan Chase, Citigroup, and Bank of America all notched earnings beats in each of the year's four quarters.

No doubt as a result, Wells Fargo's stock has been trudging behind the rest of the quartet and the broader market: 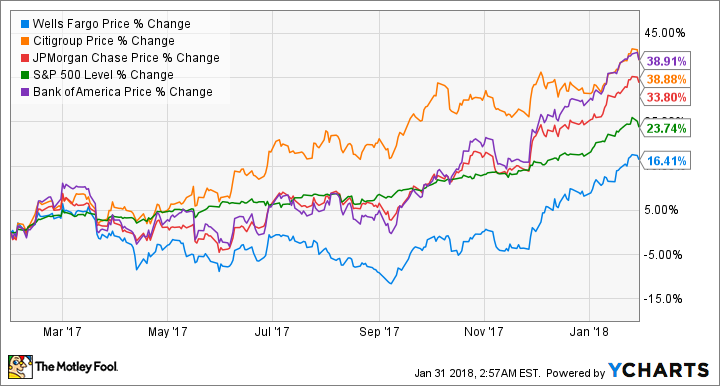 Not everything was dire for Wells Fargo in 2017. Customers might be more shy about depositing their money in the bank after the scandals, but customers with plastic don't seem to mind. The company reported encouraging growth of 6% in transaction volume on the credit cards it has issued. Also, due to improved results in the company's insurance operations, total noninterest income also saw a 6% boost.

And the bank seems to be keeping its big lead in mortgage originations, along with a mortgage servicing portfolio that has been second to none, despite declines in its overall take from home lending. Lastly, we should also keep in mind that Wells Fargo was still well in the black on the bottom line during the year, even with its numerous challenges.

All in all, however, last year wasn't a good one for Wells Fargo. It struggled to overcome the fallout from the original fake accounts scandal. Instead of getting past this, the bank made more mistakes and eroded customer trust further. The bank is probably lucky it managed to grow its revenue at all for the year.

Wells Fargo has a long and at times admirable history dating back to 1852. There have been many standout years in that stretch. Alas, 2017 wasn't one of them.