YRC Worldwide (YELL -5.05%) operates semi-truck tractor-trailers, but that didn't stop its stock from turning into a train wreck after reporting earnings Thursday evening. YRC Worldwide said it earned $0.04 per share "adjusted" for one-time items, but investors aren't happy with that equivocation, and are selling off the stock hard -- it's down 18.4% as of 11 a.m. EST Friday.

"Pro forma" profits notwithstanding, when calculated according to generally accepted accounting principles (GAAP), it turns out YRC didn't actually earn anything in Q4, but rather lost $0.23 per diluted share. This was despite the company booking 5% more revenues in Q4 2017 than it had in Q4 2016 -- $1.2 billion. 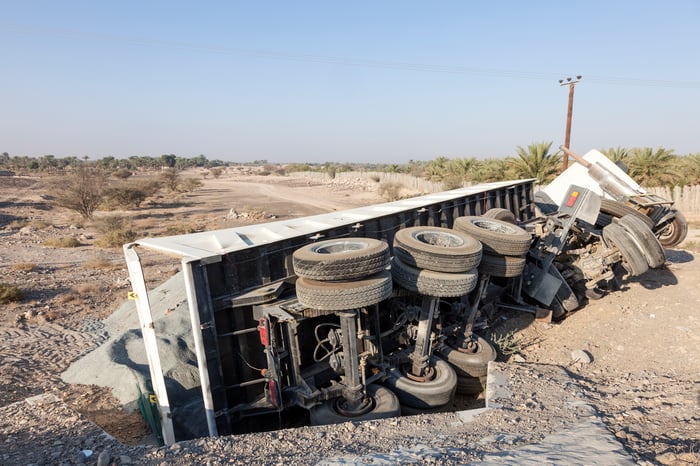 Commenting on his company's prospects for the rest of this year, YRC CEO James Welch said, "As we enter 2018, positive pricing and demand trends suggest the outlook for the trucking industry remains positive."

Despite that, YRC gave no specific guidance for whether it expects to benefit from these trends, and what it expects to earn this year -- if anything. Instead, Welch simply said he is "excited about 2018" and expressed a hope that YRC management will be able to "improve the business."

For what it's worth, analysts who follow the company are predicting that YRC Worldwide will lose money again in this year's first fiscal quarter ending in March, but end the year back in the black with a $1.65-per-share profit.