Please ensure Javascript is enabled for purposes of website accessibility
Log In Help Join The Motley Fool
Free Article Join Over 1 Million Premium Members And Get More In-Depth Stock Guidance and Research
By Keith Speights - Feb 4, 2018 at 7:08AM

Most of the headlines reporting Merck's (MRK 1.23%) fourth-quarter and full-year 2017 results focused on the company's beating earnings estimates. Merck did indeed top estimates, announcing Q4 adjusted earnings per share of $0.98 -- well above the consensus analyst estimate of $0.94.

Despite this earnings beat, though, not everything in the drugmaker's fourth-quarter update was so rosy. Merck reported revenue in the period of $10.4 billion, up 3% from the fourth quarter of 2016. Even though this growth was better than the revenue decline posted in the third quarter of 2017, it was below what analysts expected.

The more significant story, in my view, relates to what was behind Merck's weak sales growth. Here are three headwinds identified in the company's fourth-quarter earnings results that make Merck a mediocre stock right now. 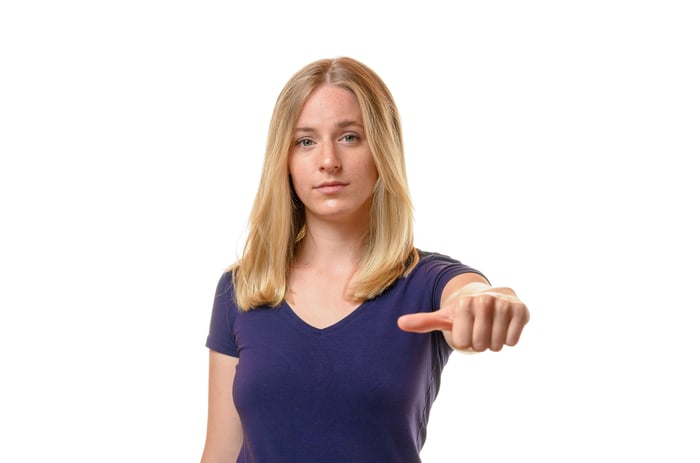 Merck's biggest problem is a collapse in sales for its cardiovascular drugs. Sales for Zetia plunged 44% year over year in Q4 to $323 million. Vycorin's fourth-quarter results weren't much better, with a drop of 38% from the prior-year period to $186 million.

There's no rebound in sight. Both of these drugs have lost exclusivity and face competition from generic versions. For the full year 2017, Merck saw a $1.6 billion decline in combined sales from Zetia and Vytorin. It's not easy making up for that kind of revenue drop.

Merck's diabetes franchise is its second biggest moneymaker, behind only its vaccines business. Diabetes drugs Januvia and Janumet combined for sales totaling nearly $5.9 billion in 2017. The issue for Merck, however, is that sales for the two drugs fell last year from their 2016 levels.

There was some good news during the fourth quarter. Sales for both Januvia and Janumet increased slightly above the prior-year period, thanks to volume growth. But Merck continues to face significant pricing pressure for both drugs. Newer SGLT2 inhibitors could take away market share from Januvia and Janumet in 2018 and beyond.

Merck claims five vaccines that combined for sales of more than $6.1 billion in 2017. The good news is that was around 6% higher than total vaccine sales in 2016. The bad news is that Merck faces several challenges that showed up in its fourth-quarter results.

Sales for Merck's most successful vaccine, Gardasil, sank 26% year over year in the fourth quarter. The company had to borrow doses of the HPV vaccine from the U.S. Centers for Disease Control and Prevention (CDC) in the third quarter as a result of a cyber-attack that affected Merck's production capacity. These borrowed doses were partially replenished in the fourth quarter.

The aftermath of the cyber-attack is only temporary, but Merck faces a longer-term challenge. Sales for shingles vaccine Zostavax plunged 45% in the fourth quarter. GlaxoSmithKline won FDA approval in October for its shingles vaccine Shingrix. Zostavax is expected to lose significant market share to Shingrix over the next few years.

Merck's best hope at overcoming these headwinds is continued success for Keytruda. The drug generated revenue of $3.8 billion in 2017. Market research firm EvaluatePharma projects that Keytruda will rake in $9.5 billion by 2022, making it the No. 3 best-selling cancer drug in the world.

The pharma company could also get some help from its pipeline. Januvia and Janumet face competition from SGLT2-inhibiting diabetes drugs, but Merck and partner Pfizer now have their own SGLT2 inhibitor. Steglatro (ertugliflozin) won FDA approval in December as a monotherapy. Combinations of ertugliflozin with Janumet and generic metformin also won approval and are being marketed under the brand names Steglujan and Segluromet, respectively.

On the other hand, Merck seems likely to encounter additional headwinds that weren't apparent from its fourth-quarter results. For example, sales for hepatitis C virus (HCV) drug Zepatier increased in Q4. The HCV drug brought in nearly $1.7 billion for the full 2017 year. However, newer HCV drugs from AbbVie and Gilead Sciences will almost certainly cause Zepatier's sales to fall drastically in 2018.

Keytruda is and will continue to be a huge winner, but it isn't enough to overcome all of Merck's headwinds. The bottom line is that Merck is a mediocre stock -- neither terribly bad nor very good. I think investors can easily find better alternatives.