Please ensure Javascript is enabled for purposes of website accessibility
Log In Help Join The Motley Fool
Free Article Join Over 1 Million Premium Members And Get More In-Depth Stock Guidance and Research
By Adam Levine-Weinberg - Feb 4, 2018 at 11:45AM

Starbucks stock has gone nowhere since mid-2015, because of slowing U.S. sales growth. Here's why investors shouldn't give up on the company.

Just two years ago, Starbucks (SBUX 3.76%) looked unstoppable in its home market. For more than half a decade, the coffee giant had posted high-single-digit comp sales growth in the United States. As recently as the first quarter of fiscal 2016 -- the three-month period that ended in December 2015 -- Starbucks achieved 9% domestic comp sales growth.

However, U.S. comp sales trends began to slow dramatically in the second half of fiscal 2016. In fiscal 2017, the company posted disappointing comp sales growth of just 3% in the U.S., and the company started fiscal 2018 with an even smaller 2% increase in Q1. As a result, Starbucks stock has been stuck in neutral for more than two years. 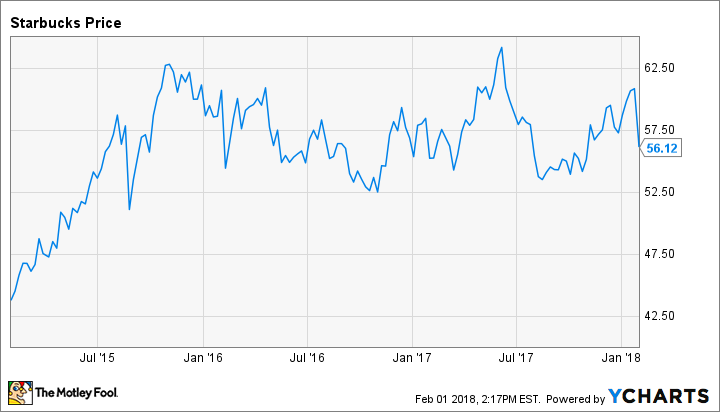 This looks like a buying opportunity for long-term investors. Starbucks is already working on several initiatives to spark a return to faster growth in the U.S. Meanwhile, the company's China business is becoming an increasingly important sales and profit growth driver.

Driving faster growth in the U.S.

Starbucks' domestic sales growth slowdown is definitely concerning. Some analysts think it shows that the company has added too many domestic stores in recent years.

However, Starbucks' management disagrees. When comp sales growth initially started to slow, the problem was throughput -- not being able to meet demand during the peak morning hours. Starbucks has since solved that problem. More recently, the issue has been weaker sales during the afternoon and evening from less frequent customers.

Starbucks is confronting this challenge head-on. First, it will expand its menu of cold beverages, which tend to sell better in the afternoon. For example, the company plans to nearly double the number of U.S. stores that sell Nitro Cold Brew coffee in 2018. 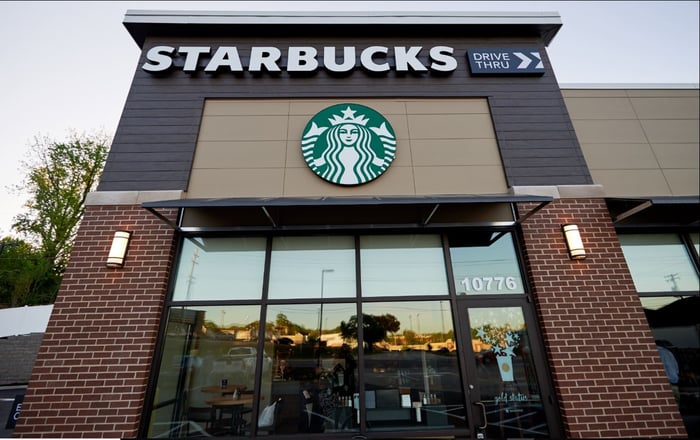 Second, in March, Starbucks will expand its mobile order and pay offering to customers who aren't Starbucks Rewards members. (The rewards program is free but requires you to pre-load money on a Starbucks card.) This action could boost sales from occasional customers by making the Starbucks experience more convenient.

Of course, Starbucks also aims to boost spending among its most loyal customers. Just this week, Starbucks launched a co-branded Visa card that allows cardholders to earn rewards program "stars" for everyday spending and provides a variety of other perks. Separately, the company continues to move upmarket by building a network of Starbucks Reserve stores that serve super-premium coffee and fresh food.

Last quarter, Starbucks' global store count surpassed 28,000. Slightly more than half of those locations are in the United States. It is thus important to boost performance in the domestic market.

That said, China remains an underappreciated growth driver for Starbucks. At the end of last quarter, Starbucks had 3,124 stores in mainland China, up from just 1,497 three years earlier. China is a very profitable market for the company, and management sees room for decades of future growth there. Indeed, Starbucks already has more than 600 stores in Shanghai alone, thanks to an aggressive growth strategy there. Shanghai has just 2% of China's population. From a different perspective, China's middle class is already twice the size of the entire U.S. population -- and it is still growing.

At its investor day in late 2016, Starbucks said it planned to have more than 5,000 stores in China by 2021. Despite opening stores at a breakneck pace, Starbucks posted robust 7% comp sales growth in China for fiscal 2017 and a 6% increase last quarter.

As Starbucks scales its China business, it will take on increasing significance as the company's No. 1 growth driver. While somewhat slower growth may be the new normal for Starbucks in the U.S., that's clearly not the case on a global basis.

Is Starbucks stock primed for a comeback?

While Starbucks' first-quarter results came in below management's expectations, the company was still able to raise its full-year earnings-per-share forecast, thanks to the benefit of tax reform. (An increase in share buyback activity will also help boost EPS.) Starbucks now projects that adjusted EPS will reach $2.48-$2.53 in fiscal 2018.

Starbucks stock currently trades for about 22-23 times this EPS forecast. That still represents a premium to the market, but it's significantly less than Starbucks' historical earnings multiple, reflecting investors' diminished growth expectations.

However, if Starbucks can continue executing its growth plan in China while driving moderately better results in the U.S., the stock could surge higher in the next few years. That's why I'm adding Starbucks stock to my watch list.