JD.Com may be the stock with the largest demographic tailwinds for growth.

JD.com, Inc. (JD 0.47%) continues defy market expectations, with shares of the Chinese e-commerce site advancing 19% in January, according to data from S&P Global Market Intelligence, building on the momentum from a strong 2017. 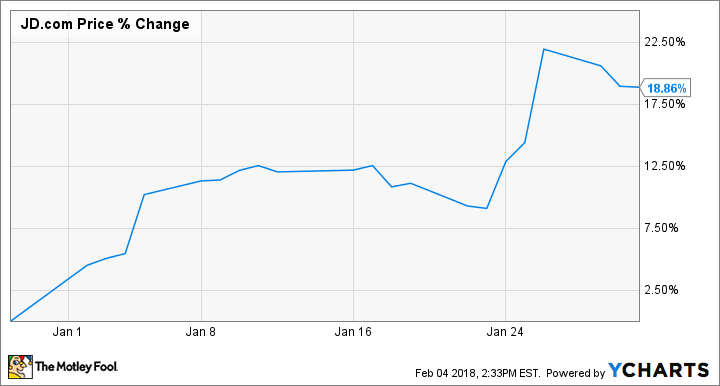 JD.com continues to benefit from the strong Chinese economy and from demographic headwinds. Last year, JD.com surged 63% on the back of strong sales growth and increased traffic. The government reported 6.9% GDP growth in 2017, an increase from 2016's growth rate of 6.7%. China's GDP growth is creating a Chinese middle class with more money, and a larger propensity to spend, which in turn boosts domestic consumption.

As both disposable income and Internet penetration among Chinese citizens continues to grow, look for all e-commerce sites, including JD.com, to benefit.

Investors appear to understand JD.com's unique opportunity and have priced in high expectations for both strong top- and bottom-line growth. Currently, JD.com trades at 50 times estimated forward earnings, versus the S&P 500's 18. According to 37 analysts surveyed by Thomson Reuters, the expectations are for JD.com to grow its top line 30% to nearly $75 billion.

To date, JD.com has shown strong growth and has exceeded investor expectations, even posting a surprise profit in the third quarter, but it will need to continue to execute to be afforded these premium valuations. In the end, the biggest risk to JD.com's tremendous stock run isn't operational but rather whether it will be able to continue to outpace large (and growing) investor expectations.