Thanks to President Trump, The New York Times is far from "failing."

The New York Times Company (NYT 1.33%) continues to defy market expectations, with shares of the newspaper advancing 26% in January, according to data from S&P Global Market Intelligence, building upon the momentum from a strong 2017. 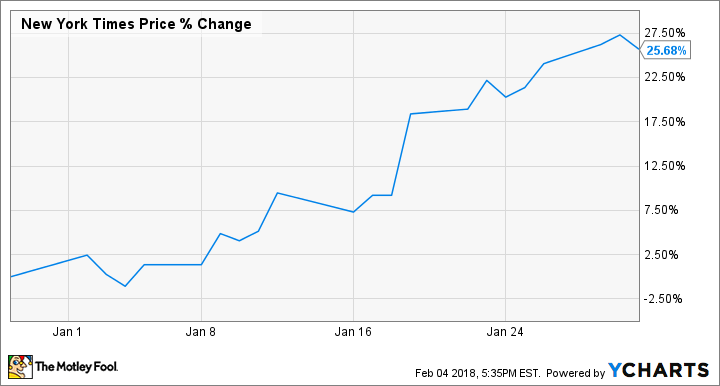 While President Trump has decried the outlet as "fake news," the president's mercurial behavior and brash style continue to drive news cycles, directly benefiting the paper's bottom line. Last year, shares of the company increased nearly 40% because of strong subscriber growth. Within the first month of the election, The NYT reported a net increase of 132,000 paid subscribers, a tenfold increase from the prior year.

Even before the current president, The New York Times was in the midst of a turnaround plan that included transitioning the online content from an advertising-based model to a subscription-based one. After introducing a paywall in 2011 with a monthly limit of 20 free articles, the website has since decreased the number to five. The transition -- which was bearing fruit even before the current president -- kicked into high gear with paid digital-only subscriptions totaling 2.5 million, a 59% increase over the prior year in the third quarter. (The fourth quarter hasn't been reported as of this writing.)

For years, analysts were bearish on The New York Times, often unreasonably so. At first glance, investor sentiment appears to have swung too far in the other direction. Currently, shares of the newspaper trade at 30 times estimated forward earnings versus the S&P 500's valuation of 18. However, it could be that analysts are (still) underestimating future performance in their consensus earnings estimate.

In the nine months reported in fiscal 2017, the NYT has grown total revenue approximately 7% and nearly doubled operating profit. (Because of differences in below-the-line items such as joint ventures, net income comparisons during this period are not indicative of performance.) Yet analysts expect EPS growth to remain roughly flat in 2018. Shares of the Old Gray Lady may appear to be richly valued but will continue to benefit from a shift to digital subscriptions, especially during the must-watch presidency.