Please ensure Javascript is enabled for purposes of website accessibility
Log In Help Join The Motley Fool
Free Article Join Over 1 Million Premium Members And Get More In-Depth Stock Guidance and Research
By John Bromels - Feb 5, 2018 at 8:05AM

The oil and gas industry player finished the year down while the market went up. Here's why.

While other oil and gas industry stocks were celebrating the reversal of their multiyear downward trends, poor master limited partnership Magellan Midstream Partners (MMP -0.91%) was heaving a sigh of relief that its rough 2017 -- in which the pipeline operator's long-term downward trend continued -- was over. 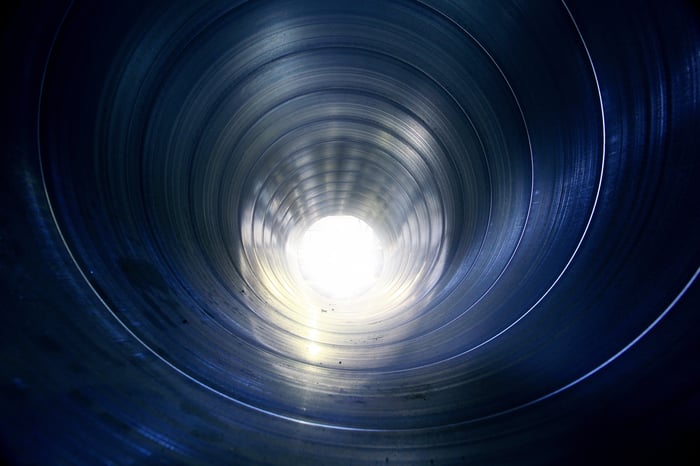 The stock market wasn't kind to shares of Magellan in 2017, but there are signs of light at the end of the...er...pipeline. Image source: Getty Images.

In a way, Magellan in 2017 was like an underperforming baseball team that trades away some star power for a bench full of promising rookies that it hopes can bring the team to greatness in future seasons. Although it hasn't worked for my Cincinnati Reds, Magellan's "building year" seems more likely to bear fruit.

Magellan's HoustonLink pipeline project -- a joint venture with TransCanada -- cost $70 million but should begin operating in Q1 of this year. It's also made several enhancements to its BridgeTex pipeline in the Permian Basin -- a joint venture with Plains All American Pipeline -- upping its capacity by 25%, and possibly tacking on an additional 10% by early 2019. Magellan also started building the Wink Pipeline in the Delaware Basin of Texas for an estimated cost of $150 million; a $125 million storage project that it plans to start up by the middle of 2018; and in a joint venture with Valero, a new $820 million marine terminal that should be fully operational by early 2019.

These projects should help the company grow earnings and increase its distribution yield to unitholders in 2018 and beyond, but in 2017, they weren't doing anything but costing money.

Other odds and ends

Various other issues outside of the company's control plagued Magellan during the year, not the least of which was Hurricane Harvey. The storm impacted company facilities in Houston and Corpus Christi, particularly its Galena Park marine facility. Harvey had a $20 million impact on the company, reducing Q3 distributable cash flow by an estimated $10 million.

Meanwhile, oil and gas prices remained low in the first two quarters of 2017. As a pipeline operator, Magellan didn't feel the impact as acutely as oil producers did, but lower prices generally mean less production activity, which translates to less demand for Magellan's pipelines. Luckily, prices rose late in the year, which should help Magellan announce a strong finish to the year when it reports Q4 earnings on Feb. 1.

That healthy balance sheet should serve Magellan well in 2018 as it looks to grow through acquisitions or additional infrastructure projects.

Magellan's rocky year in 2017 may be good for investors in 2018, because it offers an opportunity to buy a growing company with a solid balance sheet before many of its big growth drivers -- the new and expanded infrastructure projects it's bringing online over the next two years -- kick in. That said, Magellan's enterprise value-to-EBITDA ratio -- a valuation metric handy for capital-intensive businesses -- is still higher than its peers', even after a lackluster year.

Nevertheless, I've picked Magellan as one of my top three oil stocks to consider in 2018, and I'm expecting good things from the company over the next couple of years.