Shares of J.C. Penney Company, Inc. (JCPN.Q) rose last month as the department store chain got a boost from a strong holiday sales report. According to data from S&P Global Market Intelligence, shares finished January up 17%.

As the chart below shows, the stock had gained nearly 30% earlier in the month following the holiday sales report, but gave up some of those gains toward the end of January. 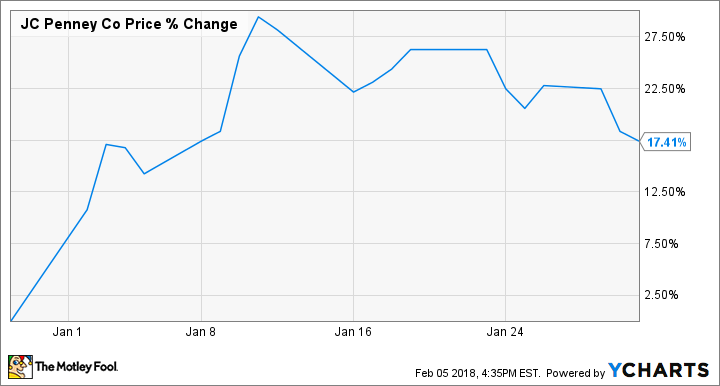 The department store chain started off the month flying higher on reports that retailers had their best holiday season in years, which was especially good news for J.C. Penney since the company is still struggling to turn a profit five years after Ron Johnson's botched turnaround strategy nearly bankrupted the company.

J.C. Penney stock actually traded flat on Jan. 4, the day its holiday sales report came out, as high expectations seemed to be baked in. The company said comparable sales rose 3.4% in the quarter, its best comparable sales growth in more than a year. However, the company maintained its earnings guidance, indicating the same-store sales growth may not have been strong enough to lift profits. Management said that home, beauty, and jewelry were the best-performing categories, and also noted double-digit growth from e-commerce sales.

Following Penney's own holiday sales release, the stock surged on strong results from peers including Kohl's, a sign that the wave of growth in department stores may persist through 2018. J.C. Penney also looks set to benefit from the new tax law, which could cut its tax rate by 14 percentage points. The most important thing for the company, though, now that comparable sales are moving in the right direction, is increasing its gross margin and driving that growth to the bottom line.

We'll learn more when the company reports fourth-quarter earnings on March 2. Analysts are expecting earnings per share of $0.48, down from $0.64 a year ago, and 2% revenue growth to $4.04 billion.