The e-commerce specialist surged alongside strong growth from its retail partners. Here's what you need to know.

Shares of Shopify Inc. (SHOP 0.54%) were surging last month, riding a bullish wave in e-commerce as the software maker also seemed to benefit from strong holiday sales reports from retailers . As a result, the stock finished the month up 27%, according to data from S&P Global Market Intelligence, despite there being little company-specific news out about Shopify.

As you can see from the chart below, Shopify stock rose consistently throughout January. 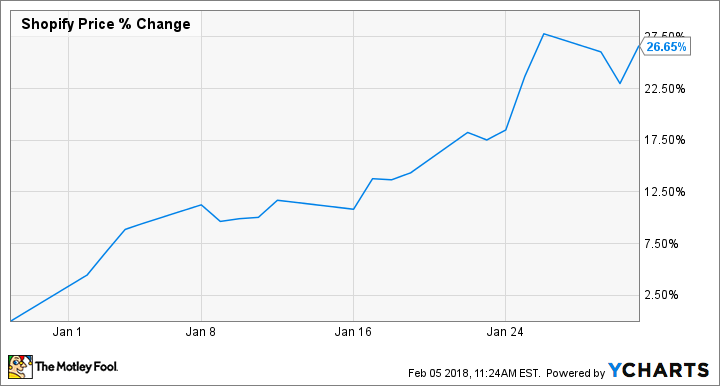 Shopify's strong performance tracked with growth from leading online retailers like Amazon.com (AMZN 3.15%), which is up 24% year to date, and eBay (EBAY 2.93%), which has gained 16.8% so far this year. Both stocks also surged following impressive fourth-quarter earnings reports, a sign that Shopify likely had a busy quarter as well.

Third-party data and holiday sales reports from retailers also showed the sector, especially online retail, had one of its best holiday seasons in years, which is, again, a bullish sign for the small and medium-sized businesses that make up Shopify's customer base.

The stock's biggest gains in the month came on Jan. 25-26, when it climbed 8% after Apple CEO Tim Cook visited the company's Toronto headquarters and gave an endorsement of its virtual reality and augmented reality technologies. 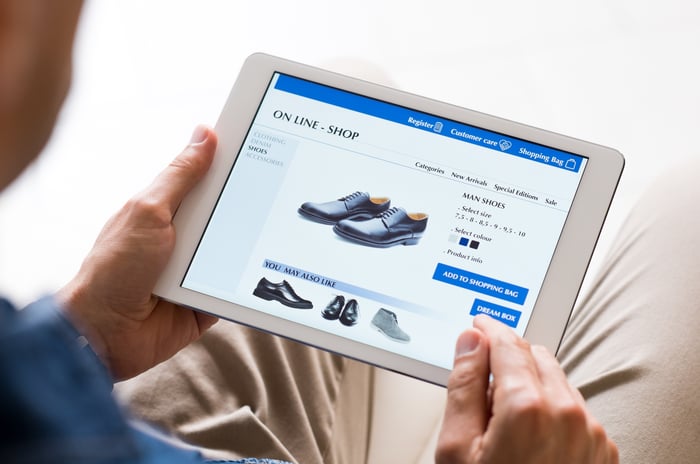 Following Shopify's surge last month, investors are counting on it to deliver a strong fourth quarter when it reports results on Feb. 15. The company's revenue tends to spike during the holiday quarter in line with a rise in merchant sales so it's an especially important time to deliver. Analysts see revenue up 60.5% to $209.3 million and expect earnings per share of $0.05, compared to breakeven a year ago.

Considering the standout results from Amazon and eBay and strong retail sales across the sector, I wouldn't be surprised to see Shopify top those numbers. Keep an eye on the company's 2018 guidance as that will also be key in determining the stock's trajectory over the next year.