These dividend stars could brighten your retirement portfolio.

Individual retirement accounts (IRAs) are, without question, one of the best vehicles available to investors to grow their retirement portfolios. And they're an ideal place to hold stocks that pay high dividends. Why? You have to pay taxes on any dividends received in a normal trading account, but taxes are deferred in a traditional IRA. 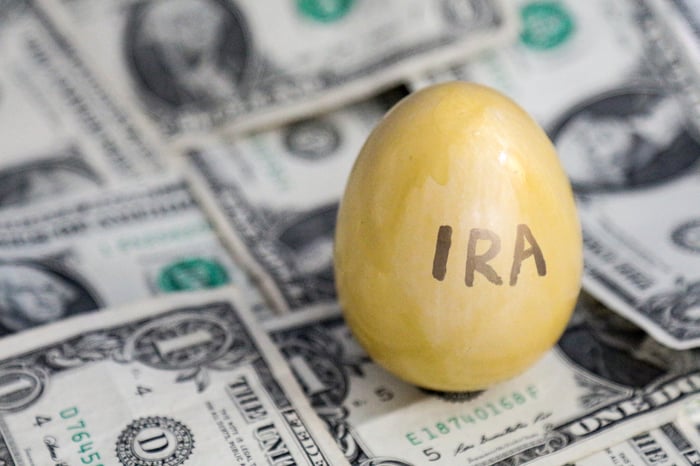 AT&T isn't just a run-of-the-mill dividend stock, it's one of an elite group known as Dividend Aristocrats. The telecom giant has increased its dividend for 34 consecutive years. AT&T's dividend yield currently stands at 5.11%.

Its yield certainly makes AT&T attractive to income investors. But is that all AT&T has to offer? You might think so at first glance, considering the stock's performance has lagged well behind the S&P 500 index over the past five years. However, Wall Street analysts think the telecom company will grow earnings at a much greater rate in the future than it has in the recent past. I think they're probably right.

One reason for optimism about AT&T is the company's investment in building out its high-speed 5G wireless network. Right now, AT&T appears to be the leader in this effort, which could position it well to benefit with the rise of self-driving cars and augmented-reality applications.

The other reason for optimism is AT&T's pending acquisition of Time Warner. Although there have been concerns that the deal won't pass regulatory hurdles, AT&T CEO Randall Stephenson recently expressed confidence that the merger will be completed. Buying Time Warner would give the company a lot of content to compete more effectively with its DIRECTV business.

I view Iron Mountain as the kind of stock you can buy and hold forever -- or pretty close to it. One factor that makes the provider of records storage and information management so appeal its its dividend, which yields nearly 6.8%.

Iron Mountain doesn't have a monopoly in the records storage business, but the company isn't too far away from claiming one. Its customer base includes 230,000 organizations around the world. Around 95% of the Fortune 1000 companies use Iron Mountain's services.

There's even more good news for investors: Organizations continue to generate more and more records and data that they need to store, and that creates significant growth opportunities for Iron Mountain.

Pfizer has ranked among the best healthcare dividend stocks on the market for quite a while. And it's still one of the best, with a dividend yield of 3.7%.

Like AT&T, though, Pfizer's stock performance hasn't been as good as the S&P 500 index in recent years. I believe better days are ahead for the big drugmaker, however. Market research firm EvaluatePharma included two of Pfizer's products on its list of the top five highest-growth drugs of 2018. Coming in at No. 5 on the list was cancer drug Ibrance. Anticoagulant Eliquis, which is marketed by Pfizer and partner Bristol-Myers Squibb, placed fourth on EvaluatePharma's ranking.

There's also Pfizer's deep pipeline to consider. The company thinks it could win approval for up to 15 potential blockbusters over the next five years. To put that into perspective, Pfizer launched only seven blockbuster drugs in the past 10 years.

Pfizer was quiet on the business development front in 2017. I expect the company will make an acquisition or two this year, which could drive even more growth.

One great thing about IRAs is that they encourage Americans to think about their long-term future. Thinking long-term is key for being successful in investing.

Any or all of these stocks could encounter headwinds this year. However, I expect AT&T, Iron Mountain, and Pfizer to generate solid gains over the long run. All three companies have solid business models and create strong cash flows that they use to reward shareholders and reinvest into their businesses. That's exactly what you want when investing your money intended for retirement.