Please ensure Javascript is enabled for purposes of website accessibility
Log In Help Join The Motley Fool
Free Article Join Over 1 Million Premium Members And Get More In-Depth Stock Guidance and Research
By Keith Speights - Jan 21, 2018 at 9:08AM

Can you guess which big pharma companies each have two drugs on the list?

That's the minimum for the amount of additional sales a drug must have to make market research firm EvaluatePharma's ranking of the highest-growth drugs of 2018. EvaluatePharma looked at all of the drugs on the market to determine which should achieve the highest year-over-year sales growth. Five drugs made the top of the list.

Which drugs will generate the greatest sales growth this year? Here they are -- along with the big pharma companies that are poised to get rich (or, more accurately, richer) from them. 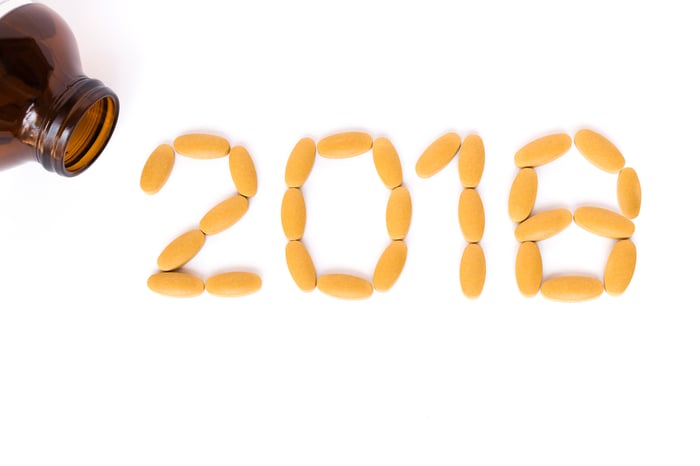 Merck (MRK 1.58%) will probably report 2017 sales for Keytruda of close to $3.5 billion. This year could be much bigger for the cancer drug. EvaluatePharma projects that Keytruda's sales will increase by $2.28 billion, a much higher jump than any other drug on the market.

Although diabetes drug Januvia has been Merck's top-selling product in the past, that should change in 2018, with Keytruda taking the top spot. Keytruda is also critical for Merck's pipeline, with several studies focusing on the drug in mid-stage and late-stage studies.

Humira ranked as the world's best-selling drug in 2017. Revenue of over $18 billion pretty much guaranteed AbbVie's (ABBV -0.47%) autoimmune disease drug the top spot. Another year at the top in 2018 seems to be in the bag as well, with EvaluatePharma estimating that Humira will pull in another $1.42 billion this year.

It wasn't too long ago that many doubted if Humira could continue its reign. A biosimilar to the drug won approval in the U.S. Several companies are also in the process of developing other Humira biosimilar versions. However, AbbVie closed a deal in 2017 that should give Humira clear sailing, at least in the U.S., for several more years.

AbbVie also has another big winner on EvaluatePharma's list of the highest-growth drugs of 2018 -- Mavyret. The hepatitis C drug won FDA approval in August 2017. AbbVie didn't provide details of sales of the drug in the third quarter, but EvaluatePharma thinks Mavyret will grow sales by $1.18 billion in its first full year on the market.

Mavyret is one of 10 drugs mentioned by AbbVie CEO Rick Gonzalez at the recent J.P. Morgan Healthcare Conference that the company believes will enable it to increase non-Humira sales to $35 billion by 2025. AbbVie should have stiff competition in the hepatitis C market from Gilead Sciences' Epclusa, though.

Bristol-Myers Squibb (BMY 0.30%) and Pfizer (PFE 3.59%) jointly market anticoagulant Eliquis. The two companies should report combined sales in 2017 for the drug of more than $7 billion. EvaluatePharma projects that revenue total will increase by $1.12 billion this year.

What about competition from Johnson & Johnson's Xarelto, especially in light of the potential of its label being updated to reflect efficacy in preventing major adverse cardiac events? Pfizer executive Albert Bourla stated in November that he thinks any impact to Eliquis will be "limited" and that the drug's momentum will continue.

AbbVie isn't the only big pharma with two drugs on the list. Pfizer shares that distinction, with EvaluatePharma forecasting that sales for the company's cancer drug Ibrance will increase by $1.08 billion in 2018. That jump would translate to revenue for Ibrance in the ballpark of $4.4 billion this year.

There are other CDK4/6 inhibitors on the market now in addition to Ibrance. However, Pfizer thinks that Ibrance will maintain an advantage in the marketplace. The company is evaluating the drug in three late-stage studies that, if successful, could give Ibrance additional indications.

Best pick to profit from these fast-growing drugs

AbbVie, Bristol-Myers Squibb, Merck, and Pfizer all stand to rake in a lot more money this year thanks to these fast-growing drugs. But which of these big pharma stocks offers the best opportunity for investors to also profit? My pick is AbbVie.

Not only does AbbVie claim two drugs on this list, but the company also has rising stars with Imbruvica and Venclexta. AbbVie's cancer drug Rova-T also landed a spot among the biggest new drugs of 2018. The company hopes to launch the drug by the end of the year. EvaluatePharma projects that Rova-T will generate sales of $1.4 billion by 2022.

In addition, AbbVie's dividend yield stands at 2.83%. The yield was a lot higher, but the stock gained a whopping 54% in 2017, pushing the yield downward. I don't expect that impressive of a performance this year. However, AbbVie continues to be one of my favorite pharma stocks for the long run.