Please ensure Javascript is enabled for purposes of website accessibility
Log In Help Join The Motley Fool
Free Article Join Over 1 Million Premium Members And Get More In-Depth Stock Guidance and Research
By Brian Stoffel - Updated Feb 6, 2018 at 7:14AM

This popular metric is used to weave seductive tales. Don't fall for it.

It was the summer of 2010, and my wife and I had about $3,000 to put in the stock market for the first time. After doing some research, I had to choose between two companies. I made what has turned out to be a $15,000 mistake.

But there's a golden nugget of wisdom in my error that has helped me, and could help you too: I was heavily persuaded by the "story" of the stock I chose, and gave far too much weight to a single variable: total addressable market (TAM). 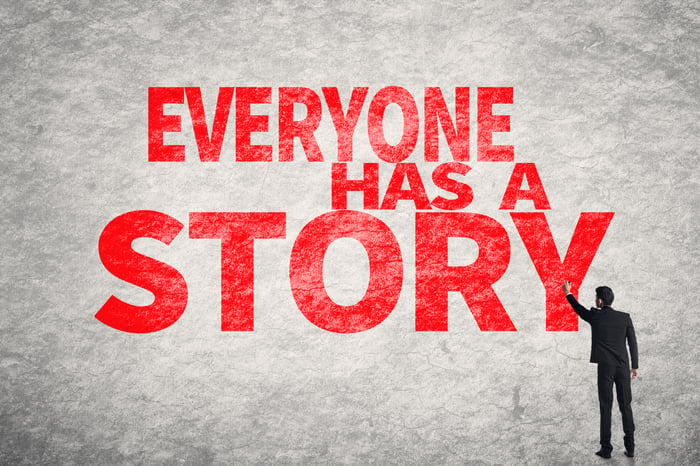 It's the kind of mistake that happens often: a company offers a solution that promises to be revolutionary. The applications for the solution are mind-boggling, and the huge TAM causes investor expectations to sky-rocket.

Then reality sets in.

That huge TAM attracts competition. The competition starts offering a similar product for a lower price, and a race to the bottom on price starts -- which is great for consumers, but awful for shareholders. The stock's price, once inflated by the huge TAM, comes crashing back down to earth.

A language solution I could get behind

In mid-2010 I was completely enamored with Rosetta Stone (RST). My wife and I were quitting our jobs to move to Costa Rica, and had bought the program to help polish our Spanish. We loved the ease of use, and the effectiveness in preparing us for our move.

As someone who was just leaving the public school teaching profession, I saw an enormous opportunity for Rosetta Stone. Rural school districts have a tough time recruiting foreign language teachers, inner-city public schools were cash-strapped by state cuts like never before, and President Obama's Race to the Top was focusing on math and reading above all else.

What better way to meet all of these divergent needs than to offer a program that was effective and would cost far less than a teacher -- if one could be found. With that thinking in mind, I was sold, even writing my first-ever Motley Fool article on the decision.

A Latin American upstart with no room to run

But that decision wasn't made lightly. I was also very interested in a growing auction site in Latin America: Mercadolibre (MELI -3.52%). But my excitement was quickly dampened when I talked to an analyst friend who talked me out of it.

He explained that the company's market cap at the time was extremely optimistic given the population of Latin America, the current size of their economies, and the limits on how much the average person in the region could spend on e-commerce goods.

In other words, the TAM for Mercadolibre was tapped -- it had reached its ceiling.

Well, here's how the two companies have done since then. 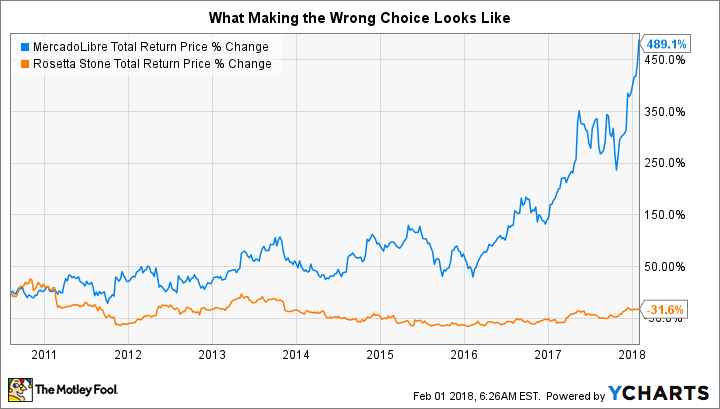 While I technically sold my Rosetta Stone shares many years ago, and have since bought Mercadolibre, this initial decision cost me around $15,000.

Where I went wrong, and what you can learn from it

Copying from how I explained the concept in my earlier version, there are four very broad types of moats:

For Rosetta Stone, the only real moat was the company's brand. It had been making inroads to adopting a subscription plan back in 2010 that would have introduced some stickiness, but I'm still not convinced users couldn't have migrated to cheaper options when they arose. And more or less, that's what has happened: cheaper and "good-enough" alternatives have stolen that TAM.

Mercadolibre, on the other hand, benefited from a major force: the network effect. As each additional buyer flocked to the site, merchants were incentivized to list their wares -- which further incentivized buyers...and so on.

Further, Mercadolibre has shown a knack for multiple futures that Rosetta Stone hasn't. It's MercadoPago platform has gained incredible traction, and the MercadoEnvios fulfillment solutions are building an even wider moat to defend against the eventual entry of Amazon into Latin America.

Of course, there's no way that I could have predicted how the "multiple futures" side of the equation would have worked out. The same is true for you moving forward. But that's why evaluating a company's moat is so important -- more important than valuation, and more important to the story than total addressable market.

So the next time you look at an investing slide deck, put that graphic on TAM in the appropriate context: the bigger it is, the more competition it will invite. Unless there's a moat around the company, your money will likely be better off invested elsewhere.

Why This Pioneering E-Commerce Stock Is a High-Conviction Pick

With MercadoLibre Revenue Up 89%, Is Now the Time to Invest?