The biotech has become one of the industry's hottest players.

Nektar Therapeutics was one of the top performing stocks in 2017, rallying nearly 400% on the potential associated with its late-stage pain drug candidate, NKTR-181, and its emerging cancer drug pipeline. 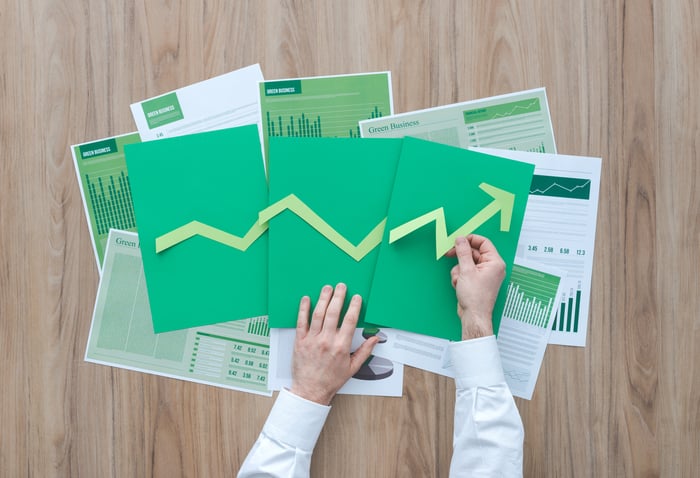 Last fall, management said it plans to file for FDA approval of NKTR-181 for use in chronic back pain in the second quarter, and presented promising early-stage study results for NKTR-214, a solid-tumor cancer treatment that it's evaluating alongside multibillion-dollar checkpoint inhibitors, including Bristol-Myers Squibb's Opdivo.

On Jan. 9, management told investors at the JP Morgan conference that it still expects to file NKTR-181 for FDA approval next quarter. If approved, it could become a top seller because, unlike traditional opioid pain-killers, it's a slow-release medicine that delivers significantly less euphoria, and thus has a lower risk of abuse. The pain treatment market across all indications is worth $20 billion annually, and Nektar Therapeutics plans to find a partner to help it commercialize NKTR-181, if it's approved.

The company also updated its plans for NKTR-214 and the other cancer-fighting drugs in its pipeline. NKTR-214 activates cancer-fighting T cells and natural killer cells directly in tumors, and it boosts PD-L1 expression, which could increase the efficacy of drugs like Opdivo. If trials are successful, NKTR-214 could end up being widely used alongside some of the best-selling cancer treatments on the planet. So far, the data is encouraging. The disease control rate was 91% in 11 treatment-naive stage IV melanoma patients, 79% in 13 first-line stage IV kidney cancer patients, and 75% in four stage IV non-small cell lung cancer patients.

There's a huge need for painkillers that can reduce physicians' reliance on opioids, so NKTR-181 could win a sizable chunk of the market if it gets a go-ahead, especially if Nektar inks a co-commercialization deal with a company that already has an established presence in pain.

More data on the company's cancer drugs should give us a better idea of their peak sales potential, and fortunately, we won't have to wait too long for it. Nektar Therapeutics expects results from an expansion trial of NKTR-214 and Opdivo in the first half of 2018, and in the second half, it expects data from a trial evaluating NKTR-214 alongside the second-best selling PD-1 drug, Keytruda.

Where Nektar Therapeutics goes from here is anyone's guess, but it has a lot of irons in the fire that could reward investors willing to take the risk of adding it to their portfolios.