The U.S. tobacco giant has many ways to profit in the year ahead and beyond.

Altria (MO -0.48%) investors are likely glad to see the back of 2017 but some income investors may very well find the stock to be a gold mine this year and beyond.

The maker of Marlboro cigarettes was rocked when the FDA proposed reducing nicotine levels, but the stock subsequently regained most of their value as the likelihood of that occurrence seemed minimal, or at least far enough into the future to not worry about.

Any serious effort to regulate cigarettes out of existence would run into a wall of legislative and legal opposition. So with Altria's business potential still intact, investors should focus on that. 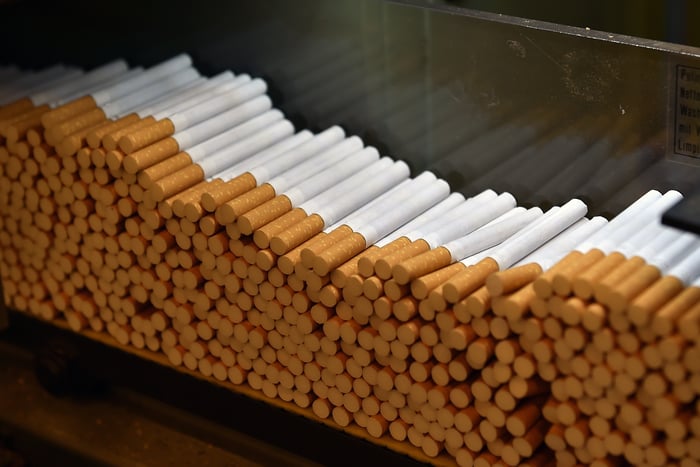 Although cigarette use continues to decline and Philip Morris International (PM -0.67%) has declared the future to be "smoke free," cigarettes are and will continue to be a profitable venture. And because its Marlboro brand continues to own the lion's share of the market -- some 43% of all cigarettes on the market, even though it's slipped a few points in recent quarters -- Altria will still lead the way.

Marlboro accounts for 85% of Altria's cigarette shipments, and it has been the largest-selling cigarette brand in the U.S. for over 40 years, meaning it's responsible for a substantial portion of the tobacco company's $8 billion or so in annual operating profits. That's not about to change anytime soon.

While excise taxes can cut into earnings, Altria and the other cigarette makers are able to make up for them by raising prices, which they tend to do twice a year. This does cause the industry to lose more smokers every year, but the inelasticity of demand -- most smokers grudgingly pay the higher prices -- keeps profits elevated. With gross margins of nearly 50% and operating margins of 38%, Altria remains a strong business, higher taxes or no.

Of course, Altria and the rest of the industry are looking to the future, which does seem to be, as Philip Morris says, smoke-free. All the players now have electronic cigarettes on the market, Altria included, which offers the MarkTen brand. Although it has about a 13% share of the market, it's far behind Juul Labs' JUUL device, which is estimated to have a 40% share, and the Reynolds American Vuse, with about 25%.

Altria counted on the introduction of Philip Morris's iQOS heated tobacco device to catapult it to the forefront. The FDA advisory panel considering the application for a reduced-risk designation for the iQOS just delivered it a body blow, determining it shouldn't be considered a safer alternative to combustible cigarettes. But that doesn't mean the company won't still be able to market the device.

Obviously, it would have been better for it to get the reduced-risk label. That would have given the iQOS a competitive advantage, one which would have benefited Altria because the device will be marketed in the U.S. as Marlboro Heat Sticks. But the new technology may still resonate with smokers looking to quit cigarettes while still seeking real tobacco flavor.

Because the iQOS and British American Tobacco's (BTI 0.30%) similar iFuse glo heat tobacco rather than burn it, the vapor created has been deemed by a number of health agencies around the world to be a better option for smokers. The FDA has largely not followed suit in that thinking. Still, getting the device on the market could lift sales and share prices at the same time.

Once and future partners

The possibility of Altria and Philip Morris International working so closely together again has many analysts expecting a merger, with one buying the other. In either case, the resulting combined company will be a global powerhouse in both tobacco and next-generation electronic cigarettes.

Altria currently pays a dividend of $2.64 per share that yields 3.8% annually. It also has an enviable record of raising its payout each year over the past 50 years, and despite challenges faced in the marketplace, will undoubtedly continuing raising the dividend for the foreseeable future.