The e-commerce giant had a doozy of a fourth-quarter report coming up in early February, and investors saw the signs ahead of time.

Shares of Amazon (AMZN 3.15%) gained 24.1% in January 2018, according to data from S&P Global Market Intelligence. The e-commerce giant released a fantastic earnings report -- in early February. January's surge happened as investors put together evidence of the then-upcoming good news.

First, the National Retail Federation reported a 5.5% spending increase in the 2017 holiday season. The biggest year-over-year increase in more than a decade spurred surging share prices across the retail sector -- including online shopping leader Amazon, of course.

Later, the company increased the monthly fee for Amazon Prime, which provides free shipping on many items plus a streaming video service. Investors embraced that move, which appears designed to move monthly Prime subscribers over to the annual pass instead as part of its long-term customer loyalty programs.

So the signs were there, and Amazon delivered in grand style. Fourth-quarter sales rose 38% year over year, and earnings more than doubled to $3.75 per share -- miles ahead of Wall Street's $1.85 consensus estimate.

At this point, Amazon has delivered a market-beating 76% return over the last 52 weeks. The company is going from strength to strength, bolstering its high-volume but low-margin retail business with a smaller but far more profitable cloud computing business. If you thought you had missed the boat on Amazon's headiest growth, don't worry -- those growth rates are still accelerating in many ways: 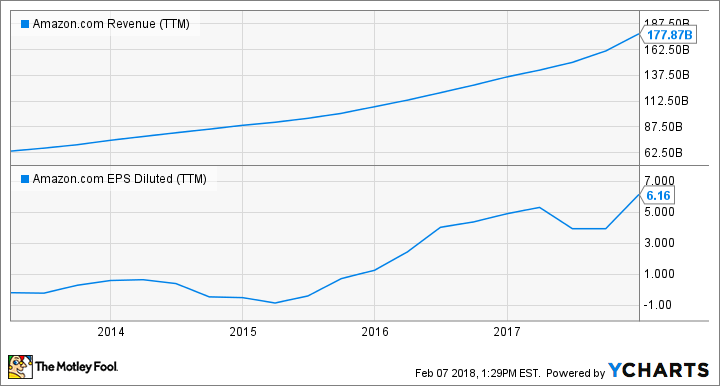