Shares of the online dating leader jumped on a strong earnings report.

Shares of Match Group (MTCH) were surging today, as the online dating specialist posted strong results in its fourth-quarter earnings report. The stock was up as much as 10.8% during the trading session and finished 8.3% higher.

It was an all-around strong quarter for Match, as revenue growth accelerated to 28.5% on the strength of the new Tinder Gold premium product, with the top line hitting $379 million, easily beating analyst expectations at $362 million. Operating expenses increased by 38%, however, as in-app purchasing fees rose by $27.2 million because of increased dependence on mobile app stores. 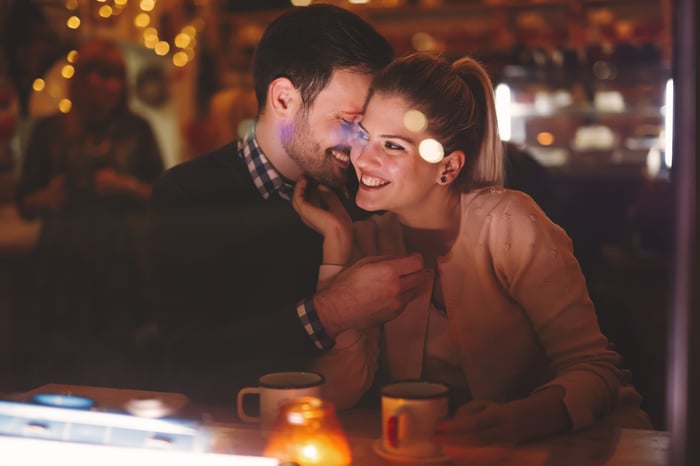 As a result, operating income rose 13% to $127.7 million, and adjusted earnings per share fell from $0.29 to $0.18, largely because of an outsize tax payment from the effects of the new U.S. tax law. Analysts had expected a per-share profit of $0.32.

The quarter is the latest evidence of Match Group's long-term growth opportunity and the power of Tinder, which is supplying the majority of the company's growth.

The company guided for revenue of $380 million to $390 million in revenue for the current quarter, ahead of estimates at $366 million, and $1.5 billion to $1.6 billion in revenue, which was within range of the analyst consensus. Management also touted its strong momentum heading in to the new year. Regarding Tinder, management plans to introduce new monetization features in the second half of the year, following efforts in the first half to make the experience better for free users.

With the company coming off its fastest revenue growth in several quarters and margin expansion expected as Tinder expands, the stock looks set for another strong year.