Please ensure Javascript is enabled for purposes of website accessibility
Log In Help Join The Motley Fool
Free Article Join Over 1 Million Premium Members And Get More In-Depth Stock Guidance and Research
By Lee Samaha - Feb 8, 2018 at 8:34AM

CEO David Farr sees his company as a key beneficiary of an improving growth environment in the U.S.

Now that the dust has settled on the failed bid for peer Rockwell Automation Inc. (ROK -1.82%), it's time to focus on the organic growth prospects at Emerson Electric Co. (EMR -1.18%). As such, the company's fiscal first-quarter earnings and commentary gave succor to the idea that the company will be a key beneficiary of President Trump's Tax Cuts and Jobs Act (TCJA) as well as ongoing U.S. GDO growth. Let's take a closer look at the earnings report. 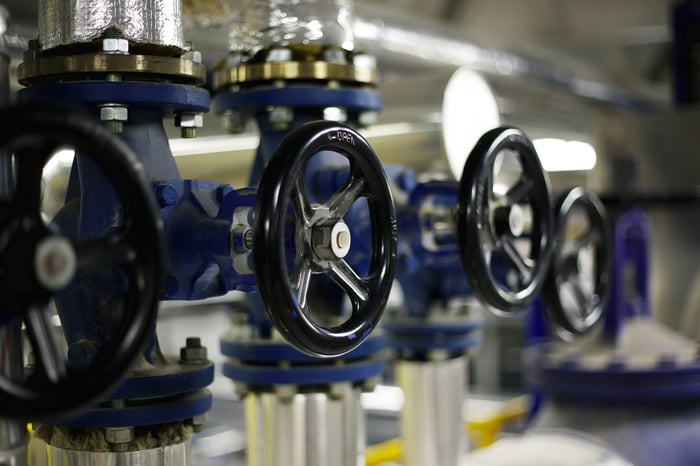 Emerson Director of Investor Relations Tim Reeves began the earnings call presentation by stating, "Overall, the first quarter performance was stronger operationally than we had anticipated a few months ago." It's a statement that was backed up by the hike in full-year guidance following a strong set of earnings.

As you can see below, the quarter marked a notable pickup in underlying sales growth, from the slightly disappointing fourth quarter. Moreover, Farr reiterated his view that the company would see a "very strong two-year recovery here a little bit differently than we've seen in the past." 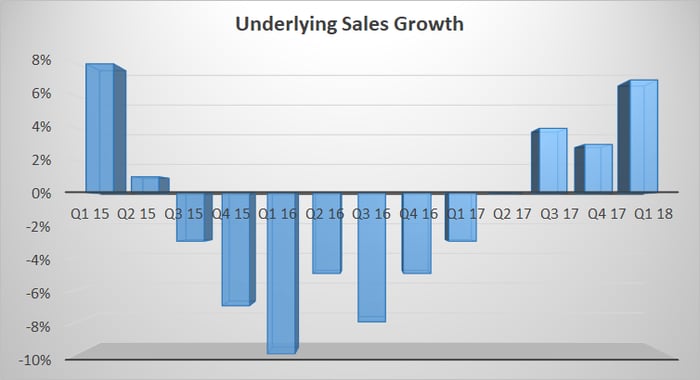 Digging into the earnings, it's clear that Emerson's more cyclical segment (automation solutions) is now leading the way in terms of revenue, earnings, and orders growth. Automation solutions grew at an underlying rate of 9% in the quarter, compared to 5% for commercial and residential solutions (climate technologies).

Indeed, Emerson's automation solutions segment is now forecast to grow at a faster rate than Rockwell Automation's organic sales are. Farr expects Emerson's automation solutions to grow at 6% to 8% in 2018, while Rockwell Automation's organic growth is forecast at 5% for 2018. The key difference between the two is Emerson is more of a process automation company (continuous flow of raw materials) and has a heavy reliance on oil and gas related expenditures, while Rockwell is more of a factory automation play -- as such Rockwell has exposure to the automotive market which looks likely to slow in 2018.

Clearly, Farr felt confident in the future of the automation market when he sanctioned a bid of $225 per share for Rockwell, and he's been proven right by the improving trends in both companies' businesses. Rockwell raised its full-year earnings guidance on its recent first-quarter earnings report, and the table below shows how Emerson Electric hiked guidance across the board.

In hindsight, Emerson Electric's acquisition of Pentair's valves and controls business in 2016 was well timed, and the Rockwell bids were made in anticipation of the kind of growth environment Emerson appears to be moving into right now -- Farr deserves kudos for his foresight. All told, if capital spending picks up as expected, then the company looks set for a strong year.