Please ensure Javascript is enabled for purposes of website accessibility
Log In Help Join The Motley Fool
Free Article Join Over 1 Million Premium Members And Get More In-Depth Stock Guidance and Research
By Beth McKenna - Feb 8, 2018 at 7:38AM

For the fourth quarter of 2017, the toymaker's year-over-year revenue dipped 2%, but adjusted EPS soared 40%, driven by strength in franchise brands and the licensing segment.

Toymaker Hasbro (HAS -0.65%) reported fourth-quarter and full-year 2017 results before the market opened on Wednesday. Revenue for the holiday quarter edged down 1.8%, though adjusted earnings per share (EPS) surged 40% from the year-ago period.

Hasbro had guided for quarterly revenue growth of 4% to 7% year over year, so it fell short of its expectation. Nonetheless, the market sent Hasbro shares soaring to a closing gain of 8.8% on Wednesday. We can attribute this reaction to adjusted EPS easily beating Wall Street's consensus estimate and to the company's upbeat comments on the earnings call about its outlook.

After Wednesday's pop, shares of Hasbro have returned 10.5% over the one-year period, trailing the S&P 500's 19.3% return, though the stock remains a big winner over periods longer than a year. Shares of Hasbro's primary rival, Barbie-maker Mattel, continue to struggle, returning negative 31.7% for the year. Revenue included a favorable $44.3 million impact from foreign exchange. Reported earnings include an EPS benefit of $0.09 compared with the year-ago period due to the adoption of a new accounting rule related to employee stock shares, and a $296.5 million, or $2.35 per share, charge associated with the recent U.S. tax reform legislation. Adjusted EPS strips out these one-time items.

For some context -- though long-term investors shouldn't place too much importance on Wall Street's near-term estimates -- analysts were expecting fourth-quarter adjusted EPS of $1.80 on revenue of $1.72 billion. So Hasbro crushed the earnings expectation, but fell short of the top-line consensus.

Along with its earnings, Hasbro also announced it was increasing its quarterly cash dividend from $0.57 to $0.63 per share -- an 11% hike. Based on Wednesday's closing price per share, the new dividend represents an annual yield of 2.5%.

Hasbro's franchise brand portfolio -- which includes the company's key internal brands -- was the growth engine in the quarter, with revenue jumping 10% from the year-ago period. Partner brands had a disappointing quarter, with year-over-year revenue declining 21%. 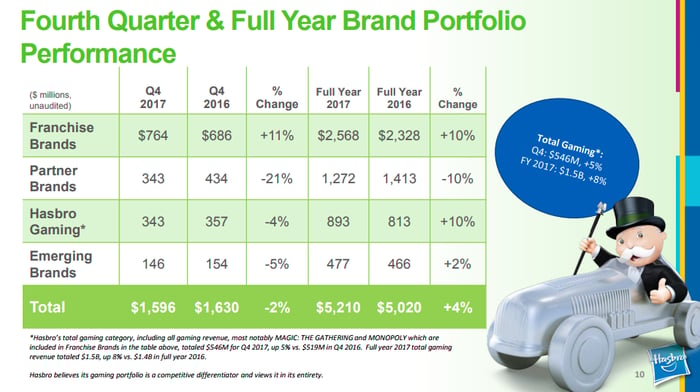 Revenue growth in franchise brands was driven by Transformers, Magic: The Gathering, Nerf, Monopoly, and My Little Pony. In partner brands, growth in Beyblade, Disney's Marvel, Sesame Street, and Disney Descendants was more than offset by declines primarily in Disney's Star Wars, DreamWorks' Trolls, and Yo-Kai Watch. Partner brands' results tend to be quite lumpy because this category is driven by movie openings. Toys based on Star Wars weren't as big of a hit over the holidays as they were last season. This could be at least partially due to the newness factor wearing off: Star Wars: The Last Jedi was the third-consecutive movie from the iconic franchise that Disney has released before the holidays.

Hasbro gaming's broad-based growth across much of its diverse portfolio was more than offset by a decline in Pie Face, which faced an extremely tough year-over-year comparable. In emerging brands, Baby Alive growth wasn't enough to make up for declines in Furby and Playskool.

As for segments, year-over-year revenue declined 1% to $751 million in U.S. and Canada, dropped 5% -- 10% absent foreign exchange -- to $723 million in international, and grew 7% to $123 million in entertainment and licensing, driven by growth in consumer products and digital gaming. Within international, Asia-Pacific performed well (up 13%), while both Europe and Latin America struggled (down 8% and 6%, respectively). Revenue in emerging markets declined 5% as reported and 9% absent foreign exchange.

In short, Hasbro turned in a tepid quarter from a revenue standpoint, but growth in its higher-margin licensing business drove strong growth in profits, on an adjusted basis.

Looking ahead, Disney's robust movie release lineup this year should provide a powerful tailwind for Hasbro's toy sales. Notably, Solo: A Star Wars Story is slated to open in theaters in May, and there are three Marvel films scheduled to hit the silver screen in 2018.