Please ensure Javascript is enabled for purposes of website accessibility
Log In Help Join The Motley Fool
Free Article Join Over 1 Million Premium Members And Get More In-Depth Stock Guidance and Research
By Rich Duprey - Feb 8, 2018 at 7:51AM

Pentagon rules permit reimbursement if certain criteria are met, but auditor isn't sure it qualifies.

Lockheed Martin (LMT -5.44%) is the single largest defense contractor for the federal government. According to the latest data available from the Federal Procurement Data System, the aerospace giant received over 173,000 contracts in 2016, valued at a total of $43.4 billion.

Despite making some $5.3 billion in profits that year, Lockheed is looking to taxpayers to help finance its 2015 acquisition of helicopter manufacturer Sikorsky Aircraft: It's asking the Pentagon to chip in $212 million to defray costs. 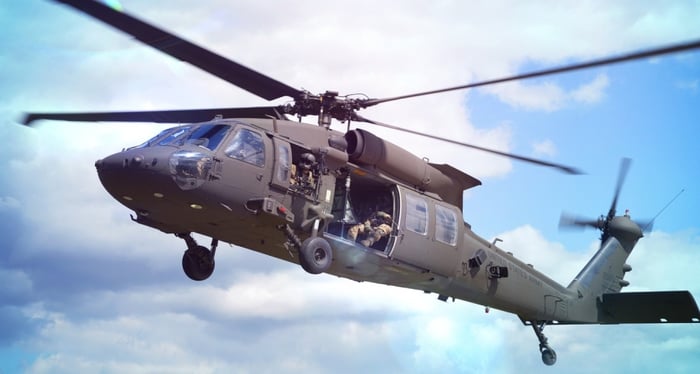 A matter of cost savings

Lockheed acquired Sikorsky Aircraft from United Technologies in 2015 for $9 billion, but structured the deal in such a way that it got a $1.9 billion tax break, thus reducing the total cost to $7.1 billion. Now it wants to use Pentagon rules that help offset a company's restructuring if it will save at least $2 for every $1 that is spent. Lockheed claims it has been delivering $8 in savings for every dollar spent on the acquisition, but the Department of Defense's auditor, the Defense Contract Management Agency, is questioning whether the purchase meets the definition of "external restructuring activities."

In an internal memo obtained by Bloomberg, the agency said Sikorsky "has not been able to demonstrate labor savings at the contract or program level" and that "there are not many common suppliers/vendors between" Sikorsky and other parts of Lockheed's rotary and mission systems business.

Under DoD rules, costs incurred to form a business, or to combine two or more businesses into a new corporate entity, are almost always unrecoverable. A defense contractor can't get reimbursed for attorney costs, brokerage fees, and the like. It can, however, recoup the costs associated with employee retraining and relocation, severance pay, and new-employee recruiting costs, among other things.

Bailing out a downsized industry

While many analysts at the time believed Lockheed had overpaid for Sikorsky when the market for helicopters was in decline, sunk by reductions in military spending and falling oil prices that lowered demand for their use as personnel transports (oil rig workers are typically ferried to platforms via helicopter).http://www.courant.com/news/connecticut/hc-lockheed-sikorsky-20160126-story.html

But with military spending on the rise and oil prices climbing higher once more, it may have been an opportune moment to acquire the business, though oil price stability is just as much an important component for oil producers to increase employment as anything. However, Sikorsky's civil helicopter sales have been particularly hard hit, with data from the General Aviation Manufacturers Association showing it shipped only 12 commercial helicopters in 2016 and just three for the first three quarters of 2017.

Lockheed's rotary and mission systems (RMS) division that's home to the Sikorsky business reported net sales increased $753 million last year compared to 2016 primarily because of $680 million from Sikorsky programs, which it said was "due to certain adjustments recorded in 2016 required to account for the acquisition and higher volume on certain helicopter programs."

As my colleague Rich Smith has pointed out, Lockheed Martin got nearly $16 billion worth of backlogged business at the time it was paying $7 billion for Sikorsky, and its UH-60 Black Hawk helicopter represents one-fifth of all helicopters in service worldwide, which has helped the RMS division become its second-largest unit while contributing almost $14.2 billion in division sales in 2017, about 28% of the total.

Sikorsky ended the year on an upswing for Lockheed Martin, in terms of sales and profitability, and CFO Bruce Tanner says its expects the helicopter manufacturer to be in a much better position in 2018 than it was for most of last year. However it won't be till 2019 when the business actually picks up.

Thus the $212 million offset Lockheed Martin is seeking would tide over the aircraft maker till various programs like the Marines new CH-53K King Stallion helicopter comes through. It's set to debut at the Berlin Air Show in April. As Black Hawk deliveries decrease, Lockheed is looking for the CH-53K to offset the dropoff, particularly with international sales.

The defense contractor maintains it is having productive talks with the government over the reimbursement program, and though it wouldn't be a fatal blow to Lockheed if it wasn't reimbursed, it's clear the money would get them through a rough patch in the business. It also shouldn't color any view of its position as the country's biggest defense contractor, meaning Lockheed Martin is still on an upward growth trajectory.