Please ensure Javascript is enabled for purposes of website accessibility
Log In Help Join The Motley Fool
Free Article Join Over 1 Million Premium Members And Get More In-Depth Stock Guidance and Research
By Rich Smith - Jun 24, 2017 at 10:13AM

Only a handful of companies make military helicopters -- and even fewer are worth investing in.

Remember our top 10 fighter jet report that came out a couple weeks back? In it, I ran down the 10 best-selling fighter jets in the world, complete with pretty pictures, fascinating facts, and some deep thoughts about the companies that make the fighter jets. I then took a look at the non-fighter set with a report on the top 10 most popular military transports.

But as it turns out, both of these articles may have missed the point. While it turns out that American-made fighter jets and cargo planes are in high demand around the world, there's one other piece of military hardware that foreign buyers like even better:

But which helos are these, who makes them, and what does this all mean for investors? Read on, and find out. 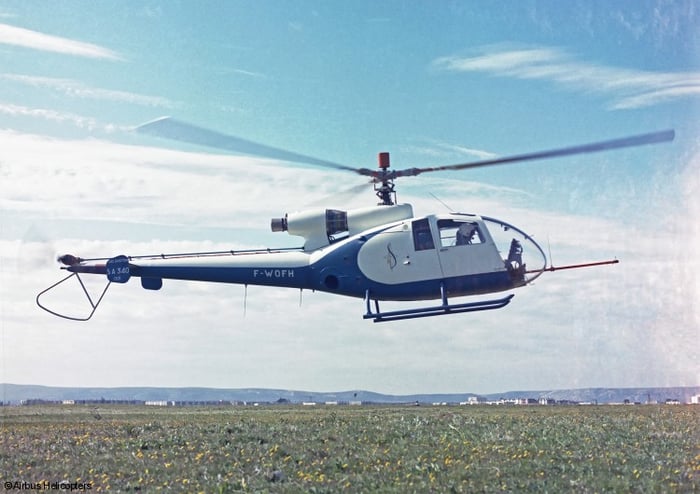 Making its first return to Flightglobal's "top 10 helicopters" list since 2014 is the Aerospatiale (now owned by Airbus (EADSY 0.32%)) SA341 Gazelle. Since we last saw it here, the global Gazelle population has slipped from 556 units in service to 496. That's still enough to give Airbus' Gazelle a 2% share of world helicopter fleets, however. In contrast to Airbus' Gazelle, Textron's (TXT -0.43%) Kiowa made the top 10 list last year as well -- but may not remain here long. Already, Kiowa ranks are thinning -- down 30% since last year to just 502 units in service. Granted, that's still enough to give the Textron aircraft a 2% market share. But the U.S. Army plans to retire its entire Kiowa fleet, and the Kiowa's days appear numbered. Textron has given the venerable AH-1 attack helicopter an update in the form of its new AH-1Z "Viper" design, and the ranks of Vipers (plus older Cobras) are swelling. At last report, Flightglobal puts the number of AH-1-derived helicopters at 556 -- up 16 units from last year.

That's enough to maintain the AH-1's 3% market share of yesteryear. 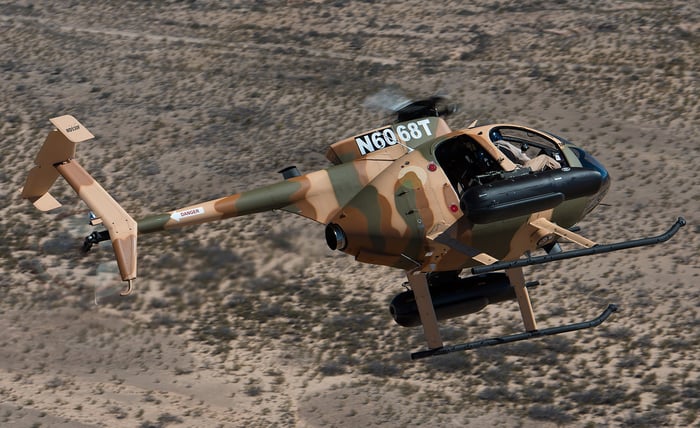 Holding steady at No. 7 on Flightglobal's list is the MD 500 helo (and its several offspring, such as the MD 530 pictured above). Financial data superstore S&P Global Market Intelligence informs us that MD 500's maker, MD Helicopters, is privately held, so this is one company you cannot invest in. Still, it's good to keep an eye on its relative position in the rankings: 688 units in service -- up 13 from last year -- and maintaining a 3% global market share. I'll save you the suspense. With minor variations, the rest of this list is going to read a lot like last year, with all the major players maintaining their relative rankings. For example, Boeing's (BA -5.07%) CH-47 Chinook transport holds steady at No. 6, albeit there are 20 more Chinooks flying today -- 896 of them -- than one year ago. Boeing's market share with this aircraft remains 4%. The Mi-24 Hind-D and Mi-35 Hind-E "flying tanks" are Russia's answer to Boeing's Apache (also see below) large helicopter gunship. There are 918 of them in service with nearly five dozen militaries around the globe, giving the Hind brand 5% global market share. Speaking of the Apache, Russia's biggest rival in attack helicopters boasts 1,110 units in service today -- 27 more than last year. This gives Boeing's attack helicopter a 6% market share, and a huge installed base of helicopters to maintain, refurbish, and upgrade. As popular as the Apache is, it didn't enter service with the U.S. military until 1986, which gave Textron's venerable UH-1 "Huey" a 27-year head start to grab market share. Today, the Huey and its descendants, including the new UH-1Y Venom (pictured above) boast 1,401 units in service.

That works out to a 7% market share -- but here's the thing: More than 50 Hueys have gone out of service worldwide over the past 12 months. Unless Textron begins selling Venoms faster than militaries can retire their older Hueys, this aircraft could lose market share. Perhaps Textron should take some lessons from Russia's Kazan Helicopter Plant, which builds the Mi-8 and Mi-17. Russia's twin "Hip" helos entered service in 1967, around the same time Textron's Hueys began buzzing through the air. But while the Mi-17 is of classic vintage, sales have not lost momentum. Last year saw a 13% increase in the number of Mi-17s in service worldwide. This year, the number is up another 15% over 2016 levels, to 2,815 units.

Thus, Mi-17's global market share has grown to 14%, and is fast approaching levels commanded by... The best-selling helicopter in the world remains the Sikorsky UH-60 Black Hawk, a brand now owned by Lockheed Martin (LMT -0.34%). Globally, 3,794 Black Hawks (and derivatives such as the Seahawk and Pave Hawk) in service command a 19% worldwide market share, making them even more popular than Lockheed's other "most popular" product, the F-16 fighter jet.

Why investors care about military helicopters

So why is all this important to investors in the defense industry? It works like this: The more helicopters a company sells, the broader the base over which it can spread research and development costs, and the less it can charge per helo.

And the cheaper the helicopter, the easier it is to sell more helicopters, growing market share further, and expanding profit margins.

Over the years, Sikorsky has sold more than 4,700 Black Hawk-family helicopters. Of these, nearly 80% are still flying today, and continuing to generate even more maintenance, parts, and upgrades revenue for Sikorsky's new owner, Lockheed Martin. As part of Lockheed's "rotary and mission systems" division, this is now the second-largest business within Lockheed Martin, contributing to division sales of nearly $15.3 billion last year.

While Sikorsky certainly beefed up Lockheed's revenues, in the early innings of the integration process, profit margins at rotary and mission systems are still suffering from the merger, with profits down sequentially in each of the past two quarters, and operating profit margins depressed to just 5.9%.

Whether Lockheed Martin can take its globe-striding dominance in helicopters and turn it into a profit-making machine remains to be seen.