Only a handful of companies make aircraft for the military -- and fewer still are worth investing in.

Fighter jocks get all the glory.

Last week, I introduced you to the 10 most popular fighter jets in the world -- and to the companies that build them and the stocks that profit from selling them.

Why focus on fighter jets? Mainly because everybody loves to read about them. Heck, everybody loves to go to movies about them. (Remember Tom Cruise, grinning from the cockpit of an F-14 Tomcat in Top Gun?) But fighters can't fly long without resupply from military aircraft that aren't fighter jets. And from an investor's perspective, it turns out that a company's non-fighter jet products may actually be more profitable than its fighters. This photo -- of fighters and bombers -- was snapped by a tanker of the 434th Air Refueling Wing. Image source: U.S. Air Force.

Take the C-130, for example. Since 1954, Lockheed Martin (LMT 0.41%) has built and sold nearly 2,500 C-130 Hercules transports -- more than three times as many F-14s as were ever produced. More on that in a minute. First, let's do a quick rundown of Flightglobal's World Air Forces 2017 report, and find out which companies are doing the best job of making -- and selling, and profiting from -- non-fighter-jet military aircraft today. Entering the list at No. 10 is the C-212 Aviocar, originally built by Spain's Construcciones Aeronauticas SA, and manufactured today by Airbus (EADSY -2.09%). Only 91 examples of the twin-engine turboprop remain in military service -- down three from last year -- but they're widely dispersed among some three dozen national militaries around the globe. That's enough to give this aircraft 2% global market share. Transall, the "Transport Allianz" among Nord Aviation of France, and Weser Flugzeugbau and Hamburger Flugzeugbau of Germany is no more, but its planes survive. Popular in Germany and France, which began building the planes back in the 1960s, 109 Transall C-160s are still flying today -- 11 fewer than one year ago. The C-160's market share stands at 3%. A supremely versatile turboprop, the Cessna 208 enjoys widespread popularity around the globe in both civilian and military variants. Since beginning production in 1985, Textron (TXT -1.70%) has sold more than 2,000 of these planes. According to Flightglobal, 134 of them are in service with various militaries today, giving the Caravan a 3% market share as well. Antonov's An-32 "Cline" and An-30 "Clank," (no, they didn't pick these names themselves. NATO did it for them) were developed from the company's earlier An-26 and An-24 models, respectively. They're said to be especially useful for their ability to take off in high-altitude environments, such as Afghanistan. Collectively, the aircraft number 143 around the globe, and command a 3% share of the military transports market. The workhorse of the mid-1970s Red Army, 175 Ilyushin Il-76s are still working the fields today, in Russia and elsewhere. That's down only one unit from last year, and gives the Il-76 a 4% global market share.

Before there was an Antonov An-30 or An-32, there were the An-24 and An-26 twin turboprop transports. More than three decades after they went out of production, 239 "Cokes" and "Curls" (yes, more NATO nicknames) remain in service today -- including one apparently brought back from the dead last year. That's enough to give these planes a 6% market share worldwide. Our second entry on this list from Airbus-absorbed CASA is the C-295 model aircraft, along with its CN235 analog. New owner Airbus calls the CN235 the world's "lowest cost tactical airlifter," a fact that's helped it win customers among the militaries of more than two dozen nations (and the U.S. Coast Guard, too). Together with its C-295 sibling, the CN235 is gaining ground in military markets. It's at this point that the advantage begins to shift to American plane makers -- and decidedly so. No. 3 on our list of the most popular military aircraft that are not fighter jets is Boeing's (BA -1.59%) popular C-17 line of transports.

The C-17 "Globemaster" actually only masters 7% of the global market. But at $225 million per unit sold, the 282 C-17s currently in service around the world today (19 more than last year) represent roughly $63.5 billion in sales Boeing has accrued to date. Boeing can expect to book billions of dollars more in future revenue for parts, maintenance, and upgrades of these aircraft. 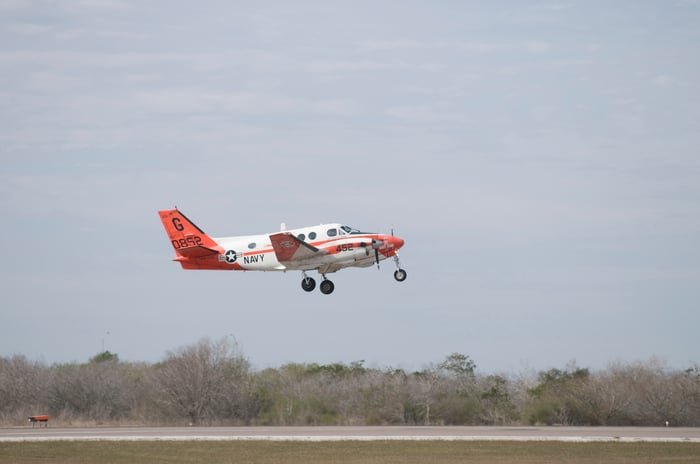 Textron's second entry on this year's Flightglobal list comes from Textron's other big airplane brand -- Beechcraft, acquired by Textron in 2014. Beechcraft's King Air, you see (represented by its T-44C Pegasus military variant, pictured above), is the world's most popular small turboprop transport. Three hundred of these aircraft are in service around the world today, five more than last year.

This gives Textron's King Air a 7% share of the global market. And last but not least (because it's actually first), we come to Lockheed Martin's famed C-130 Hercules -- hands down the most popular military aircraft (that isn't a fighter jet) on the planet. Nine hundred and fifteen of these big birds are flying around the world today. Although that's three dozen fewer than last year, it's still enough to give Lockheed's C-130 a 21% global market share in military transports, which is more than three times the share of its closest rival.

If there are two key takeaways from all of the above that investors in the defense industry should focus on, they are these:

First, America builds the top three most popular military aircraft for transporting troops and cargo in the world. In fighter jets and in combat helicopters, Russian companies claim at least second or third place. But in military transports, it's a clean sweep -- American companies are absolutely dominant.

And second -- among these American companies, Lockheed Martin is far and away top of the heap. Its C-130 Hercules transports outsell Textron's runner-up King Air by a 3-to-1 margin, and each C-130 sold brings in several times more revenue for Lockheed.

Little wonder, then, that S&P Global Market Intelligence data show Lockheed earning a 10.5% operating profit margin at its aeronautics division, while No. 2 Textron lags with a 7.9% net (No. 3 on this list, Boeing, gets 9.8%). As long as Lockheed retains pride of place at the top of this list, you can expect its C-130 franchise to continue aiding it in the profit margins race.

What's more, Lockheed has plans to parlay its C-130 dominance into even bigger sales, and profits, by marketing a civilian version of the big bird to air transport companies, air medevac services, oil companies, and even forest-fire fighters. Lockheed calls the new civilian version C-130 the "LM-100J," and the first one rolled off the assembly line just back in February. Initial estimates suggest the plane could add $5 billion in sales for Lockheed -- and probably at fat profit margins, given the scale of production already built out to supply the military C-130 market.

It's just one more reason I expect Lockheed Martin to remain a dominant player in the aerospace and defense market for years to come -- and one more reason to keep a close eye on who's who on the list of top sellers of military aircraft (even those that aren't fighter jets).